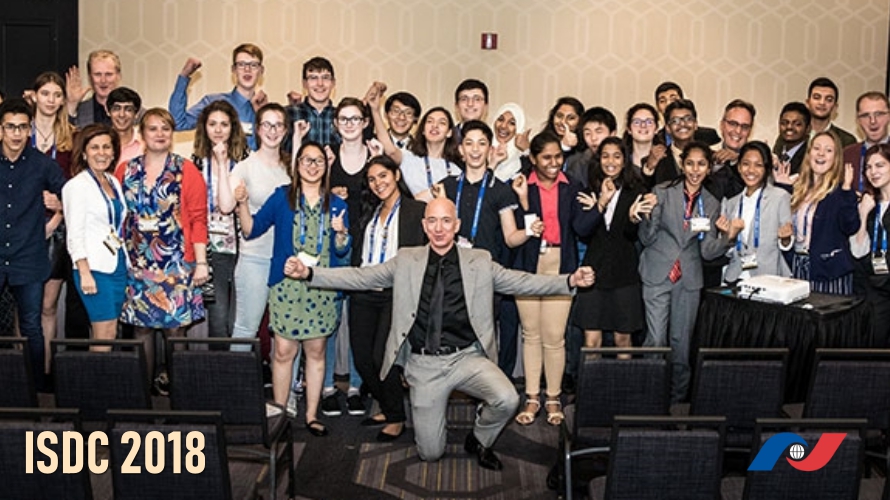 https://www.geekwire.com/2018/jeff-bezos-isdc-space-vision/
Jeff Bezos: ‘We will have to leave this planet … and it’s going to make this planet better’

Notes from Jeff Bezos speaking at ISDC 2018 : BlueOrigin – Reddit
Amazon will be saving The Expanse – it will be a Prime original for its next season….

Jeff Bezos: ‘We Must Go Back to the Moon, and This Time to Stay …
Blue Origin is an aerospace company founded by Amazon CEO Jeff Bezos that has successfully launched the … Notes from Jeff Bezos speaking at ISDC 2018.

Jeff Bezos is gathering multiple national space agencies for some …
May 24 0830 PT, Tom Mueller @ ISDC 2018 …. us on the stage in Bremen, Germany with Jeff (Bezos) in September at the (International Aeronautical Congress) …

http://www.parabolicarc.com/2018/05/28/week-space-show-213/
This Week on The Space Show
May 28, 2018 Doug Messier
We welcome back journalist Alan Boyle to talk space news and development, ISDC 2018 and the Jeff Bezos ISDC keynote talk.

https://newsworld.co/the-head-of-amazon-jeff-bezos-has-plans-to-colonize-the-moon/
The head of Amazon Jeff Bezos has plans to colonize the moon
By Ekaterina Buravich – 2018-05-28
Almost every major national space Agency has its own space program. But sometimes plans for development of the satellite and appear in people from the business sector. For example, recently in Los Angeles at the conference, ISDC (International Space Development Conference) head of Amazon and Blue Origin, Jeff Bezos announced that in the plans of its controlled companies, included the establishment of a colony on the moon. Moreover, these plans are very ambitious and interesting…

Cas Anvar on Instagram: “#RocinanteIsSafe Thank you Jeff Bezos and …

Jeff Bezos announcing that Amazon has picked up The Expanse – YouTube

https://www.geekwire.com/2018/expanse-safe-jeff-bezos-says-amazon-will-pick-sci-fi-tv-saga-crowd-goes-wild/
‘The Expanse’ is saved: Jeff Bezos says Amazon will pick up sci-fi TV saga, and the crowd goes wild
by Alan Boyle on May 25, 2018 at 11:50 pm

https://mashable.com/2018/05/26/expanse-saved-amazon-jeff-bezos/#m7MykoF8sqqO
‘The Expanse’ is officially saved and headed to Amazon

Jeff Bezos and Cas Anvar at the ISDC last night : TheExpanse – Reddit
The Expanse is a space opera, mystery-sci-fi drama television series based on the bestselling novels of the same name by James S. A. Corey.

Jeff Bezos just announced that they are picking up The Expanse …
The International Space Development Conference (ISDC), an industry conference for private space companies. Think satellite and rocket manufacturers.

ISDC 2018 The Expanse panel livestream is up : TheExpanse – Reddit
Jeff Bezos announces at #ISDC2018 that Amazon is saving “The Expanse”; will be a Prime original next season. 1169 · 21 comments. Jeff Bezos a few moments …

No updates on Amazon talks or anything? : TheExpanse – Reddit
Maybe Bezos will crash the ISDC Expanse talk in 90 minutes to announce … Jeff Bezos might really like tho show, but if Amazon Studios does not get an …

Ladies and Gentlemen….the Roci went to the edge of space!!! Here …
Said it many times but ISDC expanse panel tomorrow is right before a Jeff Bezos keynote.

https://www.einnews.com/pr_news/446567029/stars-of-science-fiction-are-coming-to-isdc-2018
Stars of Science Fiction Are Coming to ISDC 2018!
It’s Not Too Late to Experience the Future in L.A.
LOS ANGELES, CALIFORNIA, USA, May 11, 2018 /EINPresswire.com/ — The world’s greatest scientists, engineers, astronauts, and space entrepreneurs admit that science fiction inspired their career choices and fired their determination to see humans travel beyond Earth’s horizons. We recognize and honor the role that science fiction has played in the renaissance of space development. The conference will be held May 24-27th.…(our press release continues).

http://www.cherrydavis.org/tag/jeff-bezos/
Science of the Expanse Panel at the International Space Development Conference
May 20th, 2018 by Cherry

https://fanfilmfactor.com/tag/jeff-bezos/
Jonathan LanePosted on May 27, 2018
Confirmed: THE EXPANSE will have a FOURTH SEASON!
Okay, you can officially stop trying to save THE EXPANSE because Amazon has just saved it…in rather dramatic fashion!

https://www.geekwire.com/2018/martian-miscues-5-things-fix-space-movies/
Five ‘Martian’ miscues to fix in space flicks
by Alan Boyle on May 25, 2018 at 4:45 pm
LOS ANGELES — Planetary scientist Pascal Lee could give astrophysicist Neil deGrasse Tyson a good run for his money when it comes to truth-squadding movie depictions of space missions. For almost two decades, Lee has been working on the tools and techniques that will be needed for future Mars expeditions, as the leader of the Haughton-Mars Project on Devon Island in the Canadian Arctic. The project, funded by NASA, the SETI Institute and other institutions, provides an earthy analog to the Red Planet’s bleak, cold, dry, isolated environment. Astronauts could conceivably set up shop on Mars sometime in the next decade or two, and there could be a crewed base on the moon even before that. So Lee says it’s high time for Hollywood to provide a more accurate picture of how such missions would work. “We actually have not captured the look of a mission yet,” he told me today at the National Space Society’s International Space Development Conference in Los Angeles.

https://spacepolicyonline.com/news/whats-happening-in-space-policy-may-27-june-8-2018/
It’s the unofficial kickoff of summer and just about everyone uses this week to relax a bit, and, after the end of the ISDC 2018 conference later today, there is only one U.S. space policy event on our calendar this week:  a 1-hour telecon meeting of NASA’s Earth Science Advisory Committee on Tuesday.

https://spacepolicyonline.com/news/whats-happening-in-space-policy-may-20-26-2018/
This is also the week that the National Space Society’s annual International Space Development Conference (ISDC) begins in Los Angeles.  They have a tradition of holding it over Memorial Day weekend and, indeed, it runs Thursday-Sunday (Memorial Day is Monday, May 28).

http://www.thespacereview.com/article/3503/1
The summer of small launchers
by Jeff Foust
Tuesday, May 29, 2018
If this upcoming launch is a success, Rocket Lab plans to increase the cadence of future missions. The next launch is one for NASA’s Venture Class Launch Services program, carrying a collection of cubesats for the agency’s Educational Launch of Nanosatellites, or ELaNa, imitative. That launch will be “pretty close on the heels” of June’s launch, although the company hasn’t set a date. The company expects to ramp up its launch cadence for the rest of the year. “We should come out of 2018 with eight or nine launches,” said Brad Schneider, executive vice president of the company, in a presentation at the International Space Development Conference (ISDC) in Los Angeles on Friday. “Double that in 2019.”

http://www.thespaceshow.com/show/17-may-2018/broadcast-3117-special-program-aggie-kobrin-dave-dressler-isdc-2018
The Space Show with Dr. David Livingston
Broadcast 3117 Special Program: Aggie Kobrin & Dave Dressler on ISDC 2018
17 May 2018 Aggie Kobrin, Dave Dressler
We welcomed both Aggie Kobrin and Dave Dressler for this special Thursday evening program focused on ISDC 2018.  We started our one segment 62 minute with Dave introducing us to this year’s program including featuring Tom Mueller who is the key SpaceX rocket scientist behind the Merlin and Raptor engines.  Also, Jeff Bezos as a special Friday dinner speaker.  Please visit the ISDC website at http://isdc2018.nss.org to learn more about the event, make your conference and hotel reservations and to follow along with tonight’s discussion. Aggie and Dave talked about other key features of this year’s ISDC event.  They told us about the special SSP program on Wednesday before the official start of ISDC but also later in the actual conference.  In addition, they brought our attention to the Thursday program “Living in Space” with several doctors specializing in life support and the mitigation of human factor challenges for long duration spaceflight and settlement.  For the balance of the ISDC event, the name of this sessions change to space settlement.  Another key feature we learned about was the program with the head of the NASA Advanced Concepts (NIAC) on Sunday.

https://pjmedia.com/lifestyle/could-space-aliens-speak-our-languages/
Could Space Aliens Speak Our Languages?
By Michael Walsh May 27, 2018
“To put it whimsically, the Martian language might not be so different from human language after all,” explained Noam Chomsky and Jeffrey Watumull in a presentation at the International Space Development Conference (ISDC) in Los Angeles on Saturday. Chomsky is a noted author on both linguistics and global politics and is often referred to as the “father of modern linguistics” who pioneered the notion of a universal grammar. “Chomsky has often said that if a Martian visited Earth, it would think we all speak dialects of the same language, because all terrestrial languages share a common underlying structure,” said Douglas Vakoch, president of METI (short for Messaging Extra-Terrestrial Intelligence), which organized a daylong Language in the Cosmos workshop at ISDC. “But if aliens have language, would it be similar to ours? That’s the big question.”

https://www.seti.org/where-worlds-has-seti-institute-been-may-10-16-2018
Frank Drake to be Keynote Speaker at Upcoming International Space Development Conference
A press release recently announced the upcoming International Space Development Conference will feature several speakers from the science fiction community, as well as an array of renowned scientists, engineers, and space entrepreneurs. Among the honored speakers will be Frank Drake, Chair Emeritus of the SETI Institute Board of Trustees. Drake will present a keynote address titled, “SETI – Where Do We Go From Here?” at the 2018 ISDC, which will take place in Los Angeles on May 24-27.

https://www.benzinga.com/pressreleases/18/05/p11633056/space-sharks-competitors-announced
Space Sharks: Competitors Announced
May 02, 2018 5:31pm
The Center for Space Commerce and Financed announced the six competitors for the May 2018 NewSpace Business Plan Competition. These space startups will present their investment pitches and compete for a cash prize in front of a live audience.
LOS ANGELES (PRWEB) May 02, 2018
Today, the Center for Space Commerce and Finance announced the finalists that will be competing in the upcoming NewSpace Business Plan Competition on Saturday, May 26 during the International Space Development Conference (ISDC) in Los Angeles. The winning team will receive a cash prize sponsored by the Heinlein Prize Trust, as well as continued assistance and mentorship from the Center for Space Commerce and Finance…The event is being held in conjunction with the 2018 ISDC. Those interested in attending can purchase a day pass for Saturday’s events, or participate in the full, four day conference covering topics such as space travel, space development, and space settlement. More information about conference and registration options can be found online: http://isdc2018.nss.org…The NewSpace Business Plan Competition is part of the Space Business track of programming at ISDC that also includes a Space Investment Summit session on Saturday afternoon.

http://www.prweb.com/releases/2018/04/prweb15386000.htm
The NewSpace Business Plan Competition has issued a Call for Competitors for space startups to participate in a ‘Shark Tank’ style competition on May 26 at the International Space Development Conference in Los Angeles, California.
LOS ANGELES (PRWEB) April 04, 2018
Today, the The Center for Space Commerce and Finance announced a call for competitors for a regional NewSpace Business Plan Competition being held in conjunction with the 2018 International Space Development Conference (ISDC) on May 26, in Los Angeles. In a “Shark Tank” style competition, startups will present their business plans in front of a panel of investors and the ISDC audience, for a chance to win a cash prize.  (press release continues)

https://www.indiatoday.in/fyi/story/telangana-muslim-students-nasa-conference-tmreis-fusion-l5-isdc-1212426-2018-04-14
Telangana Muslim students of Class 7, 8, 9 selected for NASA conference to be held in the US
Six Telangana Muslim students have been selected for a NASA conference. The National Aeronautics and Space Administration (NASA) is an independent agency of the executive branch of the United States federal government responsible for the civilian space program, as well as aeronautics and aerospace research. The six students of Telangana Minorities Residential Educational Institutions Society (TMREIS) have been selected to attend the 2018 NASA International Space Development Conference. The conference will be held in the US. The chair of Executive Committee of National Space Society have selected the students of government-run TMREIS schools for submission of “TMREIS Fusion L5” project. This project was selected in association with Planetary Society of India and got an invitation from the National Space Society to attend the 2018 International Space Development Conference (ISDC) to be held from May 24 to May 27 at Los Angeles, California, according to a statement from the office of Telangana Chief Minister on Thursday. Chief Minister K Chandrasekhar Rao congratulated the team comprising Syed Ibrahim Ali, Mahaveen Mohammedi, Safa Maheen, Feroz Hussanin, Muskaan Tabassum and Feroz Ahmed, all students of Class 7, 8 and 9. (With inputs from IANS)