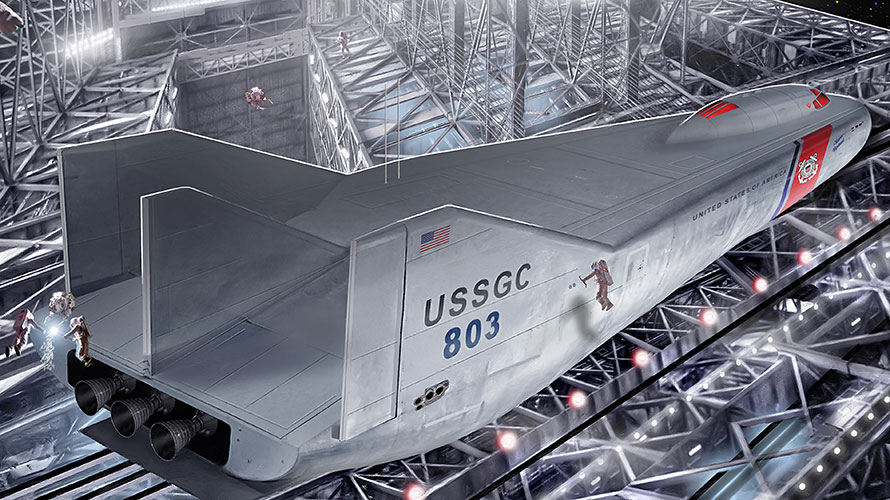 NSS has released a new position paper entitled “A Space Guard to Enable, Regulate, and Protect National Civil and Commercial Space Activities.” The abstract is below. Please note that a Space Guard is not a Space Force!

Illustration above: An artist’s impression of a crewed U.S. Space Guard Cutter. While this is unlikely anytime in the near future, a Space Guard could ultimately evolve into human spaceflight operations, with a rescue, security and enforcement capability. Image credit: James Vaughan.

In the future, the U.S. Space Guard’s role would expand by adding the capacity and responsibilities to: (a) carry out inspections and enforcement related to unlawful activities in and around restricted commercial safety and work zones established by U.S. civil and commercial entities; (b) license and regulate U.S. civil and commercial orbital debris removal technologies and missions; (c) maintain U.S. civil and commercial navigation aids, shelters, and other space infrastructure (where no licensed missions are tasked); (d) carry out in-space search and rescue of U.S. persons and property and collaborate internationally on such search and rescue per U.S. agreements, including U.S.-ratified international space treaties; and (e) as the lead U.S. agency, coordinate national space offices and collaborate with international space offices for planetary defense against near-Earth objects and extreme solar events.

NSS suggests that a feasible pathway to creating a national civil Space Guard would be to evolve it from the Commerce Department’s uniformed NOAA Officer Corps (NOAA Corps).