On February 26th, 27th and 28th, Blaze Sanders and I were among the people who partook in the Space Exploration Alliance (SEA) Legislative Blitz. The SEA is a coalition of 13 non-profit space organizations, including the AIAA, Mars Society, and National Space Society, and it aims to promote NASA’s vision for human and robotic exploration of the universe to ensure American technological and scientific preeminence in the 21st century. Each year, the SEA organizes nearly a hundred meetings with various congressional offices, during which it aims to communicate to American policy makers the impact space endeavors have on inspiring the nation’s youth; reinvigorating the science, technology, engineering and math industrial base; and fostering job-creating entrepreneurship across the national economy.

The thirteen groups comprising the Space Exploration Alliance who contributed to the 2012 Legislative Blitz.

We attended a training session during which logistics and speaking points were established, and we were briefed by a well-placed congressional staffer. During the training session, the chairmen of the blitz, Rick Zucker and Chris Carberry, outlined specific speaking points to bring up with the congressional offices, including the emphasis on the importance of the United States having its own launch capability, the establishment of an infrastructure encouraging the private sector, and the weight of establishing specific goals and timelines that foster sustainability.

On the morning of February 27, we were brought to NASA Headquarters for a brief by Deputy Director Lori Garver, who gave us a breakdown of the current budget and the upcoming estimates for FY13 for us to use in our congressional meetings.

After the course of the Blitz, there was a multitude of lessons learned on many fronts. One of the greatest obstacles in scientific progression, especially through NASA, is the barrier in communication between the technical-skilled and the decision makers. It takes scientists and engineers with a profound understanding of big-picture impacts to translate the technical evidence into a tangible, sell-able vision to Congress — you can imagine how throwing aerospace jargon at congressional staffers will have little success beyond the achievement of glazed-over eyes and absent-minded nods, and even worse, no commitment to take action.

Instead, we aim to illustrate the bridge between the government’s role in space jurisdiction and the national — and global — impact space exploration has on the economy, the public, and the scientific progression of humanity. We have to enable the congressional offices to easily see the connection between NASA and private sector activity, and the resulting effect it has on their respective states across many social and technical areas. We also must ensure they realize the return of investment; the taxpayer’s money in the space program generates not only job creation but also an inspiration in students to pursue STEM. The best way to illustrate this connection is through concrete data, such as charts and/or graphs, and a brief statistical analysis of its impact on the well-being of the state.

For instance, one of the first offices we spoke with was that of Senator Mark Begich (D-AK). We tailored our argument to the leagues of opportunity Alaska has in its Kodiak launch complex — laying out its potential use for NASA in exploration and for the private sector as a segue into a lucrative market in space. Opening up the Kodiak launch complex for commercial use would create jobs in Alaska in addition to inspiring scholars to pursue STEM (science, technology, engineering, and math) careers, tapping into a booming market and fulfilling the demand for more scientists and engineers in the state. Alaska also averages 6 times more pilots than any other state, entertains a flourishing air transportation infrastructure, and hugely depends on satellites for weather and atmospheric conditions that affect the state’s numerous fisheries and air transportation system. Through making these connections with NASA and private space, we were able make clearly visible the return of the state’s investment. 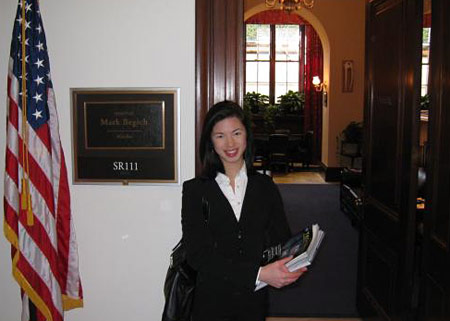 Although Sen. Jim DeMint’s (R-SC) office initially (politely) brushed off the idea of significant investment in space due to the lack of either a NASA center or a space port in South Carolina, the staffers’ eyes lit up at the possibility of job creation and potential capital through encouraging Boeing, located in Charleston, to pursue the commercial space industry.

To congressmen like Sen. Tom Harkin (D-IA) and Rep. Tod Rokita (R-IN), whose spending on education in FY11 totaled nearly 60% and 95% of their entire budgets respectively, we stressed the enormous role space exploration plays in inspiring children to pursue STEM careers. NASA serves as a beacon of STEM outreach — during the Apollo era, the children who witnessed Neil Armstrong walk on the moon grew up with a dream of also enabling awe-inspiring, near-impossible achievements for mankind. These days, we no longer have landmark missions that can ignite that same passion in kids; we need another “leap for mankind” to reinvigorate children and push them towards STEM fields. For example, the reaction to a manned landing on Mars would have children nationwide zipping around with toy rockets proclaiming “I want to work for NASA when I grow up!”

For Rep. Cynthia Lummis (R-WY), investment in small business as well as education prevailed in her FY11 spending. While Wyoming is an otherwise difficult state to tie to space exploration, Lummis’ legislative aid immediately stirred at the mention of my involvement in the Google Lunar X Prize team JURBAN, a prime example of small — very small, only 21-person-small — privatized business tapping into the space market. The impact of such programs includes the creation of innovative hardware, technologies, and novel ideas that can be sold to and used by other engineering businesses — a nationwide benefit.

Once again, it is certainly a challenge to translate the significance of the technical details — something easily palpable to engineers — into broader impacts on the economy, industrial base, and national supremacy. It is true there is a shortage of people with a balance between well-polished technical skill and a comprehensive understanding of its economic and political interplay; however these are the people who came together as part of the SEA Legislative Blitz.

Having people like myself and Blaze (17 and 25 respectively) appear before the congressional staffers has an enormous bearing on the case we present to the congressional offices. We can advocate for space all we want, but it is truly the examples we are that make it easy to see the effect of the space exploration program. It is quite a staggering thing to hear a 17-year old is actively involved in GLXP, much less with aspirations to pursue aerospace engineering entrepreneurially — even taking part in events like the Blitz to help align the political environment with the career path I want to take. And Blaze is already an entrepreneurial engineer — a young mind generating innovative ideas for the advancement of our race — appearing before Congress with a well-developed understanding that the political atmosphere surrounding space exploration is key to his aspirations as well.