Detailed views of star-formation in the Antennae Galaxies are the first astronomical test images released to the public from ALMA, confirming that this new telescope has surpassed all others of its kind. 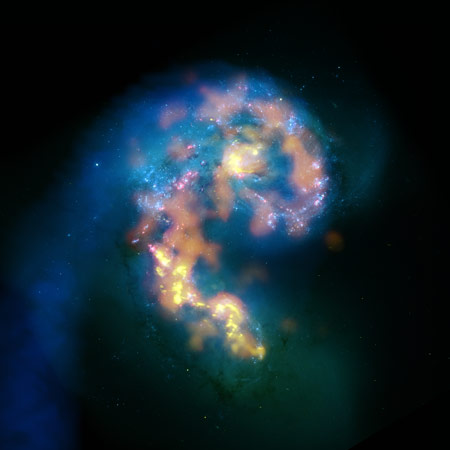 “We chose the impressive interacting system called the Antennae galaxies as a test subject,” said Dr. Alison Peck, an astronomer from the NRAO who is serving in Chile as ALMA Deputy Project Scientist during its years of careful construction and rigorous testing, “because it is in the process of undergoing the type of spectacular, violent merger that many galaxies may have undergone since their formation, but that we can rarely catch in action.”

This image is a composite of views of the Antennae taken with several different types of telescopes, including test data from ALMA (orange and yellow, and shown alone in the inset). Like the view from an ultrasound of an expectant mother’s womb, ALMA reveals hidden starbirth nestled inside otherwise obscuring dust clouds.

“ALMA’s test views of the Antennae show us star-forming regions on a level of detail that no other telescope on Earth or in space has attained. This capability can only get much better as ALMA nears completion,” said Dr. Mark McKinnon, North American ALMA Project Manager from the NRAO in Charlottesville, Virginia.

The photo above is a multiwavelength composite of interacting galaxies NGC 4038/4039, the Antennae, showing VLA radio (blues), past and recent starbirths in HST and CTIO optical (whites and pinks), and a selection of current star-forming regions in ALMA’s mm/submm (orange and yellows) showing detail surpassing all other views in these wavelengths.