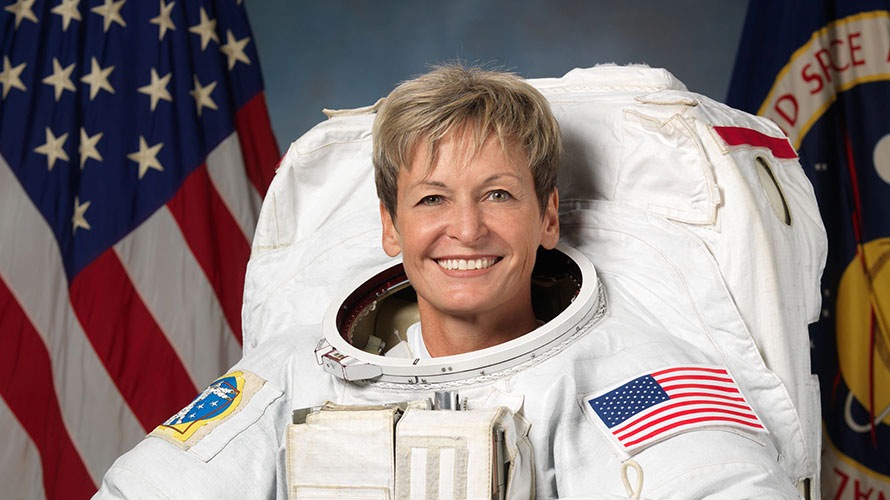 The National Space Society is proud to announce former NASA astronaut Dr. Peggy Whitson as a keynote speaker at its annual International Space Development Conference® 2021 (ISDC), which will be held virtually this year, running from June 24 through 27. Admission is free. There will be an additional streaming of the event timed for India and the Eastern Hemisphere.

Dr. Whitson is currently a space and science consultant and is slated to command Axiom Space’s second private mission to the International Space Station in 2022 aboard a SpaceX Crew Dragon spacecraft. Whitson worked at NASA for 28 years before retiring in 2018, serving as a biochemist, negotiator, manager, and project scientist for the Shuttle-Mir program. She then spent 22 years as a NASA astronaut, selected for that role in 1996. Whitson flew her first shuttle mission in 2002 and returned to Earth after a 6-month stay on the ISS, during which she assisted in space station construction and performed multiple life science experiments. She was the first female commander of the ISS on her second 6-month flight in 2007-2008. Her final NASA mission in 2016, when she was again the commander of the ISS, and by the time she returned had accumulated 665 days in space—the U.S. record for most time spent in space for a woman. She also holds the record for most spacewalks of any woman in the world at over 60 hours and was at 60 years of age the oldest person to travel to the ISS. Whitson also served as the Chief of the Astronaut Office (the first female, non-military person in that role), Deputy Chief of the Astronaut Office and Medical Sciences Division, and chaired or served on three different Astronaut Selection Boards. She was named one of TIME magazine’s 100 Most Influential People of 2018.

“Peggy Whitson represents the best traits of the human exploration of space,” said Aggie Kobrin, the ISDC conference chair. “We’re so pleased that such an outstanding woman, a remarkable achiever, can join us for this year’s conference. She’s been an inspiration to young women the world over.”

The International Space Development Conference is a four-day virtual event that will focus on key areas of the human settlement of space: space settlement, space policy, space solar power, lunar development, and international space programs. Some of the finest minds in space exploration and development will be featured, speaking on cutting-edge topics. The ISDC highlights areas of interest laid out in the National Space Society’s Roadmap for Space Settlement.