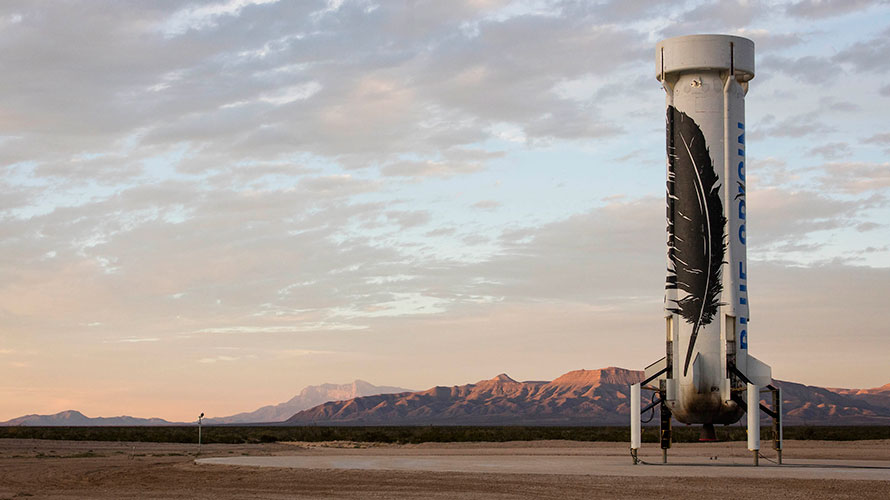 After a one-day delay due to high winds and then fog, Blue Origin this morning Wednesday, December 11th, made its last test flight of 2019 with the New Shepard suborbital rocket system. The twelfth New Shepard system flight (NS-12) launched at 11:43 am CST from the company’s West Texas facility. This was the sixth flight of the NS-3 booster with its BE-3 rocket engine, which after a seven and half minute flight was re-landed successfully (photo above), setting a record for the number of times a New Shepard rocket booster has been reused. Total flight time of the NS-12 mission was realized at just over ten minutes (10:16) when the commercial payload capsule (dubbed RSS H.G. Wells), under its main parachutes, soft landed nearby (photo below). 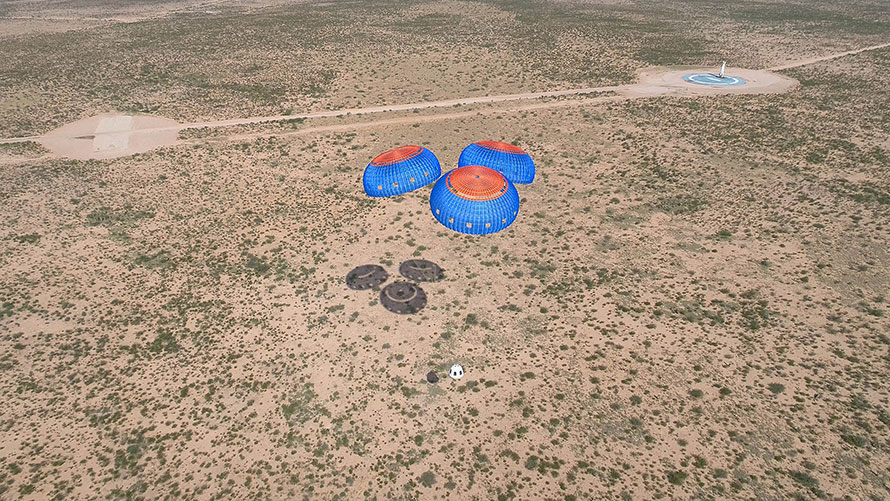 NS-12 attained a maximum ascent speed of 2,227 mph, or nearly mach 3, and reached an apogee of 343,061 ft, or 65 miles altitude, several miles above the 62 mile (100 km) Karman Line, the most broadly recognized boundary of space, and well above the 50 mile boundary recognized by U.S. federal agencies. The NS-12 flight video can be replayed at blueorigin.com.

The previous New Shepard flight, NS-11, took place on May 2nd, seven months earlier. Blue Origin CEO Bob Smith stated in October that the hiatus in test flights was being used to make sure all New Shepard systems would perform as desired, to assure the safety and comfort of passengers.

Onboard the uncrewed RSS H.G. Wells capsule today again were several commercial payloads, ranging from student activities, such as student space art postcards sponsored by the Blue Origin-founded Club for the Future, to university and NASA research projects, such as a Columbia University project to study the impact of microgravity on cell biology and a payload from NASA’s Kennedy Space Center to study gasses made from common waste on a deep space human exploration mission that could be used for propulsion or life support. NS-12 was the ninth New Shepard flight carrying a commercial payload.

Today’s flight of the NS-3 booster was not the last uncrewed test flight of the New Shepard system to take place before space tourist passenger flights begin in 2020. In the webcast for today’s NS-12 flight, Ariane Cornell, Blue Origin Director of Astronaut and Orbital Sales, mentioned that there would be a couple of more test flights before passenger flights take place. Previously Blue Origin management has stated that the newly completed booster NS-4 will be the first to carry passengers to space. Since NS-4 has not yet flown it would be reasonable to expect at least one of those final two uncrewed test flights next year to be with the new NS-4 booster, and with the new human-rated RSS (Reusable Space Ship) First Step capsule. Thus, it is likely that the first passenger New Shepard flight will take place in mid-2020, that being with only Blue Origin staff onboard.

Flights with paying space tourists will then follow, perhaps in late 2020. In the webcast today footage was shown of Blue Origin staff practicing ingress into the RSS First Step capsule and buckling up in the seats. Potential space tourist customers can register their interest via the Blue Origin website and “receive early access to pricing information and tickets when we open reservations.”  In early October CEO Bob Smith provided that the ticket price will “…be actually in the hundreds of thousands of dollars for people to go, initially.” But after that “we’re going to get this down to the point where middle-class people” can afford the tickets.

Meanwhile, Blue Origin’s space tourism competitor Virgin Galactic has made two crewed flights to space (above the 50 mile U.S. federal agency recognized space boundary) with its VSS Unity space plane, the last taking place with the two pilots and an employee passenger on February 22nd, 2019, from the Mojave Air and Space Port in California. Since then the company has moved the carrier aircraft WhiteKnightTwo and some staff to the new Spaceport America in New Mexico where they are gearing up for their final test flights and then initiation of paying passenger flights sometime this coming year. About 600 people have signed up for the flights at $250,000 each. Virgin Galactic is currently assembling a second space plane for its flight vehicle inventory and has also recently operated a small startup passenger training program.

It is anyone’s guess as to which company will be first to actually fly paying tourist passengers on suborbital trips to space. But both should achieve this goal in 2020. Hopefully after that, with multiple spacecraft now in their developmental pipelines, they will be able to increase ticket sales and the flight cadence enough to move toward profitability. For this and other reasons 2020 promises to be another fascinating year for space development.