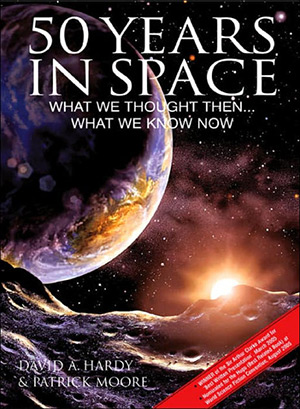 People of a certain age—say, aging baby boomers—had the great good fortune to be born before the dreams of spaceflight had yet to collide with a more prosaic reality bounded by budget resolutions and societal attention-deficit disorder. Oh, it was thrilling to watch flickering black-and-white TV images of needle-nosed rocket ships inspired by the mind of Wernher von Braun and created by Disney studio artists. On Sunday nights, millions of coonskin-capped kids would sit slack-jawed on the living room floor as the fleet of ships landed between jagged lunar peaks.

In their new book, 50 Years in Space: What We Thought Then… What We Know Now, author-astronomer Patrick Moore and illustrator David Hardy strive to pull the same pictorial trick of space exploration via artist’s eye. It hardly matters that the accompanying text—aimed at the preadolescent audience—is at best “accessible” (i.e., uninspired). It doesn’t matter. The vivid images, which comprise the heart of the book, wholly compensate. Moore, an author of more than 60 astronomy books, and Hardy, a veteran space illustrator, take their readers on a well-illustrated—if partly well-trodden—trek through the solar system and beyond.

50 Years in Space has the advantage of perspective, resting as it does on Moore’s half century of experience as an astronomer, author and BBC presenter. There is no denying a certain fascination as he describes and illustrates updates to previous iterations of his picture books (the first edition, entitled The Challenge of the Stars, was published in 1972).

But therein lies the source of unavoidable disappointment too. As fascinating as paintings inspired by Venera, Viking, Spirit and Cassini images are, it is difficult to compete with earlier imagination-inspired images in Collier’s and Life and the seminal book Conquest of Space.

Those earlier images kindled America’s drive to other planets with a series of stunning portfolios of rotating space stations, planetary “landscapes” and “hypothetical” landings, which often included space-suited figures with gumball-shaped helmets. The tiny figures might have been added “for scale,” but the subliminal idea of man in space still wormed its way into the national psyche.

How exciting it was to explore the pre-Space Age artist’s conception of Venus as an antediluvian world replete with vaguely familiar reptilian creatures, a delirium of slashing claws and ripping teeth; or to climb sand-colored Martian mesas under a dark blue sky; or to marvel at the most iconic and enduring image of all: the pale ethereal vision of ringed Saturn floating in the blue tranquility of Titan’s atmosphere. Simple yet exotic—and we now know totally wrong—but a timeless masterpiece that “launched a thousand careers.”

The first half of Hardy and Moore’s book—shackled as it is by reality—flounders by comparison. That’s not to say that real images of our planetary neighbors don’t captivate—on the contrary. But dreamscapes have a special potency rarely captured through a lens.

The intervening 50 years have also put self-imposed fences around the imagination. Distracted by domestic turmoil, the American public lowered its gaze from the heavens. Mars remained untouched, our first space station was abandoned, and the space shuttle was built down to a price, not up to a standard. The Moon, once the destination of a generation, remains as far away today as in 1955. We know more now but dare to dream less.

The readers of 50 Years in Space can be forgiven if they sense that Hardy and Moore look back more in sorrow than anger. We could have achieved so much more. But hope triumphs over experience, and the authors persevere in inviting readers to imagine an alternate, more hopeful future. Their invitation is aided immeasurably by pictorial voyages beyond the solar system, a place where the imagination still reigns supreme.

Here the reader is treated to exotica in the vein of pre-Space Age artists. Hardy and Moore capture some of that earlier excitement by offering a gallery of imaginary vistas—aurora-like displays on alien worlds lashed by supernova radiation, and idyllic landscapes of planets orbiting nearby stars deliberately painted to emulate the romantic Hudson River school.

There is still room to dream in the second half of Hardy and Moore’s 50 Years in Space. The cosmos is a big place. And perhaps, if we are lucky, this coffee-table book can inspire at least a few readers still young enough to inherit the next 50 years.