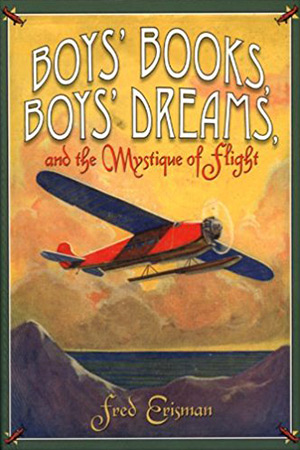 First you hear the sound of the engines. Cupping a hand over your eyes, you squint up into the summer sky, seeking the silhouette. Once you see the winged shape, you follow it until it is lost over the tree line, unable to let it go until the last moment. Once you know you can’t see it anymore, your attention returns to the sandlot baseball game and your duties as right fielder.

It is that boyhood romance with flight that Fred Erisman captures in his book Boys’ Books, Boys’ Dreams and the Mystique of Flight. While it is an academic study of the juvenile aviation adventure book series from 1910-1950, it also has the same sense of fun and wonder that marked American society’s love affair with the burgeoning aviation field. Erisman, the Lorraine Shirley Professor Emeritus of Literature at Texas Christian University, has published many works on genre fiction and authors, study subjects from Sherlock Holmes to children’s literature and authors from Robert Heinlein to Laura Ingalls Wilder. He has also been the Charles Lindbergh chair of aerospace history at the National Air and Space Museum of the Smithsonian Institution, so he is well-qualified to chronicle this genre of fiction.

A very positive feature of this book is that he places each era of the boys’ aviation adventure books in its historical context. The aviation developments of the era, the key historic aviators and aircraft are profiled to set the stage for each chapter’s discussion of the fictional adventures. The book is organized into eight chapters, with the first providing background on the boys’ adventure books as a genre and the remaining seven chapters each dealing with a period of aviation and publishing history. Erisman does not try to force these periods into neat decades but, properly, marks each period by the key events (World Wars I and II, the Lindbergh flight, etc.) that stimulated changes in the publishing arena. The bibliography alone makes this book of value to researchers as it lists hundreds of primary sources and details the boys’ book series related to aviation.

While the boys’ aviation series generally would not be considered science fiction (other than some of the Tom Swift adventures), they could rightly be called “scientific fiction,” as the latest developments in aviation technology inspired the more advanced technology in the boys’ books. In the first chapter, Erisman chronicles the connection between the boys’ series and the interest in the emerging field of aviation, as covered in magazines of the day like Popular Science Monthly and Scientific American.

Many of these advances in real life were spurred by prizes offered to pioneers who set aviation records (air speed, altitude, distance, and so forth) so many of the boys aviation adventures centered on the young heroes being involved in one of these prize pursuits. The news of the day provided easy plot hooks for the series’ writers and Erisman’s study blends the time and technology with the sophistication of the plot devices in the juvenile book series.

Erisman also devotes an appropriate amount of coverage to the behind-the-scenes world of juvenile publishing in that era, highlighting the Stratemeyer Syndicate, well-known for its most famous juvenile literary characters Tom Swift, the Hardy Boys and Nancy Drew. The syndicate had a large portion of the boys’ aviation adventure market with the most notable series being the Ted Scott novels. That series appeared in response to the excitement for all things to do with aviation caused by Charles Lindbergh’s transatlantic flight in 1927. Ted Scott’s adventures featured some of the new technologies as in Ted Scott Breaking the Ocean to Ocean Record and Ted Scott and the Big Dirigible and even some fantastic technology as in Ted Scott and the Invisible Airplane. Most of the series, including the Ted Scott books, centered on conventional adventure fare like foiling diamond smugglers, searching for lost persons, exploring new territories or weather-related survival adventures, just all from the air.

During both of the World Wars, military adventures played a large part, notably the “Boy Scouts of the Air” series of World War I. In Chapter Three, Erisman points out an ironic conflict between the aviation series and the Boy Scouts of America (BSA). The official Scouting organization protested the implied connection between such books and the actual aims of Scouting. BSA contended that real scouts would never take part is such daring behaviors as the boys in the books did. However, the Boy Scout Law calls for Scouts to trustworthy, loyal, helpful, friendly, courteous, kind, obedient, cheerful, thrifty, brave (emphasis added), clean, and reverent. Meanwhile, the “bible” for the Stratemeyer Syndicate books requires the boys depicted to be plucky, patriotic, honest, and stand for justice (much in the same way Fran Striker’s bible for the Lone Ranger radio writers required the hero to use correct grammar and never shoot to kill). So, there seems to be little spiritual conflict between either organization’s view of ideal American boyhood.

In the post World War II era, the boys’ aviation books began to include rocket technology and it is at this point that science fiction themes and series begin to take a prominent place in the market. In Chapter Eight, Erisman notes that in 1946, John W. Campbell, Jr., long-established editor of Astounding Science Fiction, also became editor of the science magazine Air Trails Pictorial. It is also in this post-war era that Robert Heinlein begins his juvenile series of twelve novels, starting with Rocket Ship Galileo in 1947 through Have Space Suit, Will Travel in 1958. While the first book featured three central teen heroes, Heinlein did not keep those characters in a continuing series. Instead, as Erisman points out, the Heinlein books continued to expand their universe as real-life developments expanded the frontiers of space science. Erisman also comments on the close of the boys’ aviation series era as Isaac Asimov (writing as Pau French) published the first of the Lucky Starr, Space Ranger books in 1952. As the first half of the century ends, the transition is complete.

Erisman does make passing reference to aviation and space adventures in other media, such as the pulp magazines and the 1950 television show “Tom Corbett, Space Cadet” (adapted from Heinlein’s work). For context, researchers in this field might want to consider period comic strips with aviation flavor such as the newspaper “Steve Canyon” series or the “Blackhawk” comic book. Overall, Erisman does a masterful job in spanning such a large body of work and entwining it with the scientific advances of the era covered. This book would be of interest to researchers in aviation, juvenile literature, genre fiction or publishing history.