Book Review: But for the Grace of God 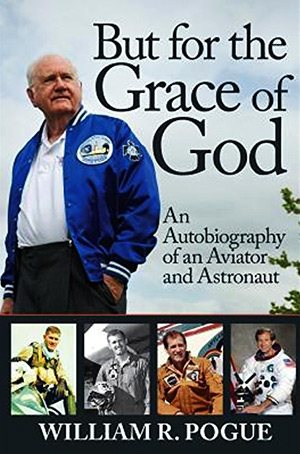 If the Apollo program hadn’t been cut short, the names of Bill Pogue and Jerry Carr might be more familiar to space buffs. They were members of the last class of Apollo astronauts; some of their classmates made it to the Moon, and are among the select 24 names of the only humans to get beyond Earth orbit in the first half century of space travel. But Pogue and Carr were scheduled to fly on Apollo 19, and budget cuts left their Saturn booster to sit as the world’s most expensive lawn ornament at the Johnson Space Center. Instead of going to the Moon, Pogue and Carr became two-thirds of the crew of Skylab 4, the last and longest of the Skylab missions that used surplus Apollo hardware to create the first successful space station. Skylab was every bit as successful as Apollo, but circling the Earth didn’t capture public attention like flying to the Moon had done, so the names of its astronauts aren’t as well-known as, for instance, Roosa and Mitchell, who joined the astronaut corps at the same time.

Pogue’s memoir breaks down into three parts: his childhood and education in Oklahoma, his career as a pilot in the U.S. Air Force, and his life as an astronaut. The subtitle of the book should give you a clue that he considers the part of his life spent in airplanes as important as the part spent in spacecraft. In fact, he spends almost twice as much time detailing his time as a pilot in the Air Force as he does talking about his time as a NASA astronaut. This will no doubt make some readers impatient and dissatisfied with the relative weighting of subject matter. But for those space buffs who, like me, are also interested in aviation, Pogue’s adventures flying fighter-bombers in the Korean War, as an exchange pilot with the Royal Air Force at their Empire Test Pilot’s School, and especially the time he spent with the USAF’s most elite flying unit, the Thunderbirds, are of as much interest as his flight to space.

Pogue was born in 1930, just a few months before Neil Armstrong. He spends a fair amount of time talking about his childhood experiences, growing up during the Great Depression in rural Oklahoma, where his family moved from one small town to another as his father taught in several small schools. The farther we get from this era, the stranger it seems to readers even one generation younger that so many of our first generation of astronauts grew up in homes without indoor plumbing, reading in front of wood-burning stoves to keep warm in the winter and riding horses instead of driving cars. Younger readers like Pogue’s grandchildren might hear these stories as if they happened on another planet.

When a woman once asked him about the dangers of riding rockets into hard vacuum, Pogue’s answer was that he had found flying airplanes to be more dangerous, and but for the grace of God he could have died several times without ever getting to space. The reader will understand why, as he recounts incident after incident of engine flameout, ruptured g-suit, ejection from an F-100 Super Sabre when the engine lost power, failed nose gear (a similar situation had killed another F-100 pilot a few months earlier), another engine power loss, compressor stalls, spins, complete electrical failure, oil pressure loss (twice) — all this just in the two years he flew with the Thunderbirds — and you understand his point of view. In comparison, his description of his Skylab mission seems like a summer holiday.

That 84-day mission in 1973 was the longest stay humans had made in space up to that point, and most readers will find Pogue’s treatment of his one and only space flight to be frustratingly short. A more lengthy description of the flight can be found in the authorized biography of the mission’s commander, Gerald (Jerry) Carr: Around the World in 84 Days, by David Shayler, makes a good companion piece to this book. But every astronaut biography has at least one magic moment for its readers, and I found that moment in Pogue’s description of his EVA. When he paused at the solar observatory for a breather (“Perched on top of Skylab, I felt like I was doing a slow swan dive through space”), Ed Gibson told him the space station’s gyroscopes were having a little difficulty keeping the space station stable. Pogue immediately understood why: “The suit design was the root of the problem… The air flow also carried carbon dioxide away from the face down to an exhaust valve, where the surplus gas flowed out of the suit. This outward flowing gas acted like a small rocket engine. While I leaned against the solar observatory, I was 30 feet from the centerline of Skylab. This 30-foot lever arm multiplied the small force of airflow. That was why Ed had trouble with the gyroscopes. The small airflow from my suit rotated a 100-ton space station!”

Quibbles about balance and pacing aside, readers who enjoy airplanes as much as they do rockets will find this book enjoyable.