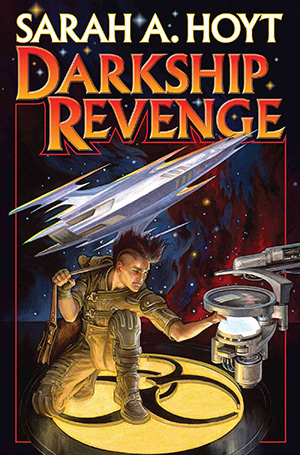 Athena Hera Sinistra is giving birth to her first baby, in a spaceship which is under attack. Neither event was expected by Athena.

The baby was unexpected because Athena is the bioengineered clone of a Mule. The Mules, genetically-engineered supermen, are designed to be sterile. Athena was surprised but not displeased to discover she could become pregnant.

The attack is unexpected because the attacking spaceship is not from Earth and not from the asteroid colony of Eden, where her husband’s spaceship is from. Earth and Eden are the only two places in the Solar System known to be inhabited by humans.

The series is set in an Earth and Solar System six centuries in the future. The world has been in a technological stasis for most of that time as a result of a centuries-past rebellion against the Earth’s rulers, the Mules.

The Mules were not intended as dictators. Rather, they were bred as Earth’s administrative class, genetically programed to benevolently run the world for the benefit of normal humans. They took over, leading to an eventual revolt. The Mules were chased off Earth, taking Je Reviens, a spaceship, to Alpha Centauri. All other genetically-engineered humans on Earth were slaughtered. A handful escaped, forming Eden, a colony in the asteroid belt. The world was taken over by 50 new rulers, the Good Men (all Mules, unknown to their subjects).

Powerpods are the reason Athena and her husband, Kit, travel interplanetary space. They run a darkship, a stealth, two-person spaceship used to steal powerpods for Eden. It is when Earth is three days away and Athena expecting momentarily that their ship, Cathouse, is attacked. Kit drives off the attackers after Athena gives birth.

Shortly after that Kit disappears while outside Cathouse making repairs. Athena figures out that he has been kidnapped and taken to Earth.

Where on Earth? Athena does not know. What she does know is she is getting him back. And nothing will stop her: Not the apathy of allies on Earth, not a bio-engineered plague, and not the return of Je Reviens and the Mules.

What follows is a tautly-paced adventure as Athena seeks to recover Kit and then make Earth and Eden safe from Je Reviens and its passengers. The struggle takes place on Earth and interplanetary space.

Darkship Revenge is entertaining fiction. It stands independently on its own merits, without requiring reader familiarity with the series. That statement may seem paradoxical after the long explanation about the story universe, but understanding the background is important only to understand how this book is relevant to planetary exploration.

Hoyt weaves planetary exploration into this book’s background in subtle ways. On one level Darkship Revenge is shoot-‘em-up space opera. Underlying the action is a setting with explanations as to why societies explore space and why they do not, what drives progress and what retards it. Hoyt’s future is one where humans left Earth, but with few exceptions remain stuck in low Earth orbit for centuries. Even Eden fails to grow.

The whole series is worth reading. Darkship Revenge is a good starting point, a worthwhile addition to the series, and as entertaining as the other books.