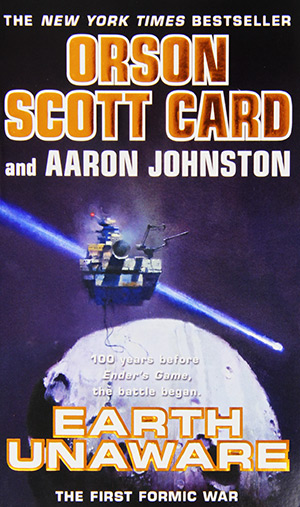 Earth Unaware takes place 100 years before Ender’s Game, and is the first book in a trilogy describing the original arrival and attack by the ant-like alien Formics. It requires no knowledge about the Ender’s Game movie or books, and can be enjoyed as a stand-alone read. NSS members will find a rich description of a future where humanity has spread throughout the solar system to harness its resources, with asteroid miners proliferating and settlements on the Moon .

The book starts with Victor, a teenaged technician aboard a Venezuelan family-based mining ship roaming the Kuiper belt beyond Pluto. Victor has enhanced the family’s mining equipment to stabilize their moored vessel from shocks when drilling. Their craft soon meets with four ships of an Italian mining clan to exchange Victor’s technology for supplies. They also exchange family members to avoid inbreeding during their long voyages. The reader learns that the miners eke out a rough existence in these outer reaches because of the well-funded corporate mining consortiums that have cornered the inner asteroid belt.

After the Italian ships leave, Victor’s young friend who monitors their survey telescopes spots a strange object. It is approaching our solar system at near light speed. The family council argues about whether to send a warning to Earth, or to just ignore the incoming vessel.

While Victor’s ship mines an especially rich asteroid, a corporate craft is nearby conducting an experiment. That ship is led by Lem Jukes, the son of the CEO of a large lunar-based mining corporation. The Moon is a hive of activity since all space miners send their extracted ore there via “Quickships.” These are essentially large unmanned missiles packed with the asteroid ore. Lem’s ship is in this remote region of space to test a prototype “glaser” or gravity laser, which can reduce an asteroid to dust with one blast. Then, magnetism collects the metals without time-consuming mining. Lem’s company will use the glasers to monopolize mining throughout the solar system.

After a successful test, Lem’s corporate ship heads for Weigh Station Four. The station is a decrepit hodgepodge of old mining vessels and retired equipment haphazardly connected via tubes and tunnels. And, continuing the familiar sci-fi trope about frontier stations, the corrupt docking officials demand exorbitant fees while the run-down establishment patrons are semi-lawless individuals.

When the station is destroyed by the incoming alien starship, Lem’s and Victor’s vessels team up to attack the aliens before they can reach the inner planets. Long-range communications are down since the huge alien ship uses a ram scoop for propulsion and emits huge amounts of gamma rays. Earth cannot be forewarned, so the two ships sneak up on the sides of the alien craft. The resulting hand-to-hand (hand-to-claw?) melee on the surface of the alien vessel is quite exciting and well done.

One technical quibble with the story is that the miners use spacesuit umbilicals for oxygen and power, with only short-term emergency autonomous capability. And, the super advanced aliens also use air hoses for their extra-vehicular excursions. It seems that in this universe no one has invented NASA’s Primary Life Support Subsystem backpack!

The book also includes a long subplot of a special forces organization which goes through a series of missions on Earth involving characters that fans of the Enders Game series will recognize. This subplot provides background for the second book of this prequel series but distracts from the main action of this book other than to emphasize how “unaware” and also unprepared Earth is to deal with an alien invasion.

The most enjoyable aspect of the novel is its plausible view of how people will live and work in space. The details are fun to think about such as people wearing magnetic greaves on their legs to walk in a lunar city. Removing the greaves and hopping about like the old Apollo astronauts is considered uncouth! The Afterword states that the authors held many meetings to discuss asteroid mining.  Would there be room for both independent miners and corporations, and what would be their relationships?  How would the miner families marry and prosper? I believe they created a credible vision of the future with additional exciting space action that NSS members will enjoy.