Book Review: The Engines of God 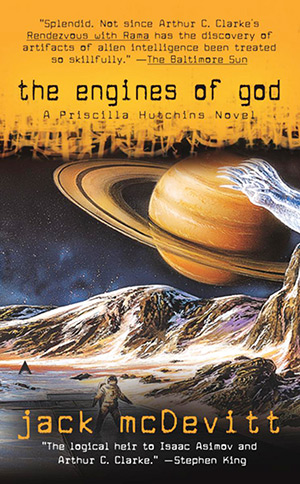 The Engines of God is the first in a series of books featuring Priscilla “Hutch” Hutchins, a 23rd century star pilot who earns her living by ferrying archaeologists to star systems that once hosted alien civilizations. Strangely enough, there seem to be a lot more destroyed civilizations than there are thriving ones within about 100 light years of Earth. Enigmatic artifacts seem to tie together widely-separated star systems. The archaeologists set out to solve the puzzle.

At Quraqua, a planet whose technological civilization went extinct only about a thousand years before the archaeologists arrived, tension arises between the scientists and the industrialists. The scientists want to study the artifacts left by the lost civilization, and the industrialists want to set off nuclear bombs at Quraqua’s poles to set in motion an irreversible process to terraform the planet.

Enigmatic monuments on Quaraqua’s moon, in orbit around the inhabited planet in the Nok system, as well as on Saturn’s moon, Iapetus, point to the existence of an ancient starfaring race that had visited all three. This race apparently warned Quraqua of a powerful destructive threat to all civilized life.

Hutch gets involved in the search for who the Monument Builders were and why they built the monuments that they did. Along the way, she shows resourcefulness and strength of character as she and her passengers are faced with a massive tsunami, predatory alien life forms, political intrigue, high-speed collisions in space, and ultimately the destroyer of worlds, the engines of god.

I enjoyed this book on several levels. Hutch is an interesting and engaging character, with strengths and weaknesses that make her human and bring her to life. The other characters are not quite as well developed because the story is told from Hutch’s viewpoint. Plenty of action arises as the team of archaeologists faces threats due to human nature, bad luck, alien life forms, and their own lack of preparedness for the unexpected.

The primary quest of the book is to discover who the Monument Makers were, why they built the monuments, and where they came from. As the answers to these questions slowly start to fall into place, a larger question emerges: What had the Monument Makers feared, and where had they gone? This was immediately followed by an even larger question: Was the force that had apparently destroyed every civilization that humans had found on other worlds, a threat to Earth? Hutch and her surviving crewmates were about to find out. The question was whether they would live to tell anyone else.