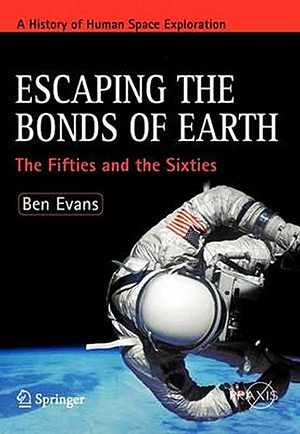 Escaping the Bonds of Earth is a comprehensive account of human space exploration, from the early planning phases in the late fifties through the first circumnavigation of the Moon by Apollo 8. In this first volume of an eventual five, Ben Evans analyzes each flight extensively. What is different about this book is the level of historic detail of each Soviet and American mission, including crew, spacecraft, and launch vehicle, contained in a single volume for the time period covered.

The author, writing from Atherstone Warwickshire, UK, imparts a slightly different perspective to the Cold War space race. He has also included many often unmentioned facts about these missions which escape most other accounts of this historic time.

The reader can virtually experience the training as Russian pilots were selected and prepared for the first Vostok flights. One can almost hear Yuri Gagarin yell “Poyekhali! (Let’s go)” at 9:07 am, 12 April 1961 as he launched and became the first human in space (p. 18).

The book describes the space rivalry not only between the two opposing nations, but also within the US space program itself. Rocket pioneer Werner von Braun designed the Redstone rocket for the U.S. Army, which launched America’s first space traveler, Alan Shepard, on Freedom 7. He later proclaimed of the Air Force’s Atlas launch vehicle, “John Glenn is going to ride that contraption? He should be getting a medal just for sitting on top of it before he takes off!” (p. 113).

The narrative includes sufficient detail for the reader to imagine floating next to Alexei Leonov on the world’s first space walk in March 1965, or with American Ed White as he matched the feat only two weeks later aboard Gemini IV, and the intensity of Wally Schirra and Tom Stafford’s experience as they sit coolly in Gemini VI atop an uncertain bomb, their Titan launch vehicle, which shut down 1.2 seconds after ignition.

While reading, one can almost get caught in the spin as Neil Armstrong and Dave Scott rotated at 60 revolutions per minute as a result of a stuck thruster on Gemini VIII. Only their expert piloting skills saved them from disaster.

Gemini IX highlights the struggles of learning to walk in space as Gene Cernan worked with few hand or footholds. The book explains how, just prior to Cernan’s total exhaustion, Commander Tom Stafford called him into the cabin. The details of the learning curve of space walking continue through Gemini X, XI, and XII.

The author uniquely includes world events in the story that accompany and sometimes affect and shape the space programs. The Bay of Pigs operation, construction of the Berlin Wall, the Cuban missile crisis, and civil rights marches in Birmingham, AL are all described in the context of the times. The ouster of Nikita Khrushchev and assassination of John F. Kennedy affected the space race in undetermined ways, while the Vietnam War influenced national policy and space budgets.

Fire swept through the command module of Apollo 1 on 27 January 1967, killing Gus Grissom, Ed White, and Roger Chaffee. The author leaves no stone unturned in describing what led to the tragedy and the following results of it. Also described is the Soyuz 1 flight which claimed the first Soviet space fatality when the parachute lines tangled and Vladimir Komarov plummeted to his death.

The often overlooked unmanned Apollo 2 through 6 flights are chronicled here, including the first ever Earth-shaking launch of the Saturn V, and the orbital test of Lunar Module 1 (LM 1) boosted by the Saturn IB that would have carried Apollo 1.

The author wraps up his thorough narrative with the crew of Apollo 8 orbiting the Moon on Christmas Eve, sending back messages of goodwill.

Ben Evans has created a finely detailed history of human spaceflight, from the first selection and training of astronauts and cosmonauts to the first crewed exploration of the Moon. The American space missions are more completely described but the author has uncovered several new facts about the previously secretive Soviet program. Many interesting photographs complement the narrative, some rarely seen before.

Escaping the Bonds of Earth is not only enjoyable and educational to read, but would be a great addition to anyone’s space exploration library. In fact the quality of this work would make it an excellent text for many history courses.