Book Review: Far Side of the Moon 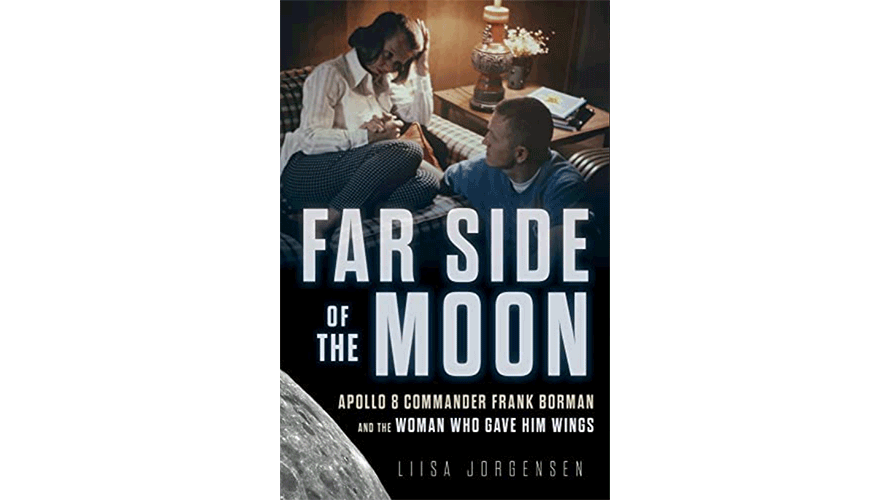 The Apollo astronauts were heroes, and they were completely human. The Apollo program was heroic, and it was also a meat grinder on marriages for everyone involved, especially the astronauts. The 100-hour (or more) work weeks; the stress of watching rockets you or your friends or family members were going to ride blow up in test flights; the pressure to beat the Russians to the Moon in a vital battle in the Cold War, with the whole world watching; the astronaut groupies who didn’t care whether the objects of their desires were wearing wedding rings or not…. Is it any wonder that 23 of the 30 Gemini and Apollo astronauts saw their marriages end in divorce?

One Apollo marriage that beat the odds was that of Frank and Susan Borman. Their love story is one for the ages, and Lisa Jorgenson tells that story with great sensitivity. Frank met Susan in high school, and was so smitten that he didn’t have the nerve to ask her out himself. He got his first date with her by begging his friend to ask her out while pretending to be him. But even from this early age, Frank Borman was a driven, goal-oriented man, and when he won an appointment to West Point he talked himself into what he later described as the worst mistake of his life: he decided it wasn’t fair to Susan to ask her to wait four years while he concentrated on his military education and career, so he broke off dating her. He had four years to contemplate the depth of his error. He began writing letters to her, and by the time he’d graduated he’d won her back.

The story of the next few years should open the eyes of readers to the hardships endured by couples who serve in the military, and the truth of the saying that “it’s not just the soldier who serves, it’s the whole family.” The Bormans were assigned to a new base just after they’d leased a new apartment in preparation for the birth of their first child. Susan was days away from going into labor, but within two days they had to pack everything they’d just unpacked, break their lease and forfeit the security deposit (no small loss to a young couple on an Air Force Lieutenant’s salary), drive cross-country to find a new obstetrician for Susan and a new place to live, all in time for Frank to report for duty on Monday morning. The Christmas after their firstborn arrived found Frank stationed in the Philippines with his family back in the U.S., nursing a ruptured eardrum and wondering if he would ever fly again.

Obviously he did. Susan adjusted to his hazardous test pilot career, determined to be the perfect military wife. She stuffed her fears to the back of her mind as they watched other test pilots die riding unproven supersonic aircraft when Frank went to test pilot school at Edwards Air Force Base, and made each of the shabby apartments they lived in along the way to NASA into a comfortable home for Frank and her sons. Frank was selected as part of the second group of NASA astronauts in 1962, and they moved from the metaphorical frying pan into the fire.

Until the Apollo fire claimed the lives of three Apollo astronauts, including their closest friend and neighbor Ed White, Susan was able to convince herself that no harm would ever come to Frank. But if it could happen to Ed, as vibrant and competent a pilot as ever drew breath, Susan came to fear that it could happen to Frank. Frank was seldom home to reassure her; he was working round the clock at the California plant where the next Apollo capsules were being assembled, making sure all design defects were corrected so no such accident could ever happen again. When he was assigned to command the first flight around the Moon, Susan was convinced she would never see him again. Chris Kraft, director at the Johnson Space Center, thought she was strong enough to take an honest answer when she asked him to give her the odds of mission success, so he told her what he believed: “Maybe about fifty-fifty.” But his answer only made her more afraid. She lived through the eight days of Apollo 8 in absolute terror.

When he came home from Apollo 8, Frank decided he’d done his part in the battle of the Cold War and retired from NASA. But his Type A personality had to find another hill to take, so he went to work at Eastern Airlines and eventually became its CEO. He remained oblivious to the cost of the years of stress on Susan, whose heavy drinking to deal with that stress eventually degenerated into full-blown alcoholism. It was only when she nearly died from alcohol poisoning that he finally woke up, and started applying the same focus to caring for his wife that he’d been paying to his career.

Frank and Susan Borman came through their own fire, tempered and strengthened, and ultimately found a deep and lasting peace with the world and with each other. Their dedication to each other is a story as intense and moving as any of Frank’s spaceflights.

NSS index of over 400 book reviews