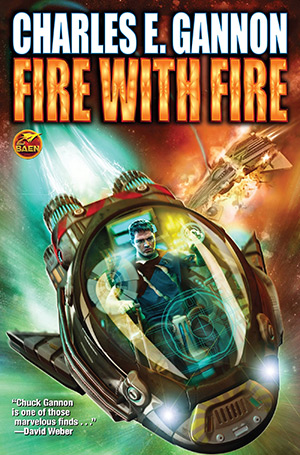 Fire with Fire is a science fiction adventure, mystery, and spy novel all rolled into one.

While investigating a government project that he believes is a cover for something else on the Moon, well-known journalist Caine Riordan does something suspicious that results in him being “detained” via cryosleep for 13 years. He is revived by secret agent Richard Downing who says that Riordan presented a security threat, the nature of which is still secret, but that he has been revived because he is needed for a covert mission to an exoplanet. After the mission, Downing’s boss, Admiral Nolan, will reveal what happened on the Moon to Riordan whose most recent memories, including whatever secret he learned, has been wiped. Riordan has little choice but to accept the mission. He receives a crash course in covert operations and is sent to Delta Pavonis Three. He must determine if a native species exists there that may be responsible for some ruins under control of a corporate drilling operation.

Riordan is much more than an astute investigative journalist with some spy training. Nolan is convinced he is a polymath—a genius of wide-ranging knowledge that is able to apply that knowledge in unusual and creative ways—and just the asset the government needs to get to the truth.

Riordan soon discovers that someone is willing to stop at nothing to prevent him reporting the findings of his investigation on Delta Pavonis Three. His clever escapes from attempts to misdirect or assassinate him provide an intriguing look inside the mind of a polymath who must piece together the puzzle of his own personal mystery while uncovering a conspiracy that threatens the survival of the human species.

In keeping with both the spy and academic underpinnings of the story, each character is given a code name from Greek mythology, with Riordan being Odysseus and Downing being Mentor. In the latter half of the book, more characters and points of view are introduced, including a woman warrior, Admiral Nolan’s adult children, mysterious aliens, and an enemy referred to only as Circe. These characters, like Riordan, come with histories and personalities that provide layers of depth and possibilities to the plot.

Not being a polymath, I can’t judge if Riordan thinks and acts like one, but I enjoyed the twists and turns of his reasoning and deductions in much the same way that Dr. Watson follows Sherlock Holmes—not making the connections between observations myself, but recognizing the truth when Riordan reveals it. The ability to include the observations/evidence, yet not immediately give away their significance, shows perhaps an almost polymath-level of plotting skill by author Charles Gannon. If not a polymath himself, he is certainly well qualified to write a book about a future involving an academic/analyst/spy. Gannon was a Fulbright Fellow, a distinguished professor of English with a PhD, who previously worked as a scriptwriter and producer for clients including the United Nations, and who, besides writing novels, currently advises various intelligence and defense agencies through SIGMA, a science fiction “think tank.” (Full disclosure, I’m also a member of SIGMA, though I’ve only met Gannon once.)

The world Gannon has created is as fascinating as his polymath character, mostly because of the interplay of cultures, politics, corporate interests, and unknown alien agendas. All the parties behave in often unpredictable, yet logical ways: just like the polymath character who must analyze and predict their interactions. The technology is mostly in the background including a shift (FTL) drive that operates somewhat like a wormhole, and escape pods that automatically cryofreeze the occupant.

Most of the explanations of spacecraft and future tech were quite imaginative and delightful to read. But, being a nitpicky science editor, I must protest one scene that includes a character seeing, hearing, and speaking during an explosive decompression. Barring some major alterations to human anatomy, opening an airlock/cargo bay to vacuum would suck all gases out of an unsuited body and cause loss of consciousness in mere seconds.

I also have one nitpick with the plot. I don’t want to give any spoilers, but I didn’t find the way Riordan recovers his lost memories in the final section of this book to be very plausible, especially coming after other events. Still, I was happily surprised with what he remembers and found myself saying, “Oh, of course!”

The book comes to a satisfying conclusion with a few details remaining fuzzy enough to spark my curiosity about what else Riordan may remember about his “lost” time on the Moon in the next book.

Yes, Fire with Fire is the first of a planned series that I wish were already available. I look forward to more complex interactions with this polymath, both the character and author.