Book Review: Footprints in the Dust 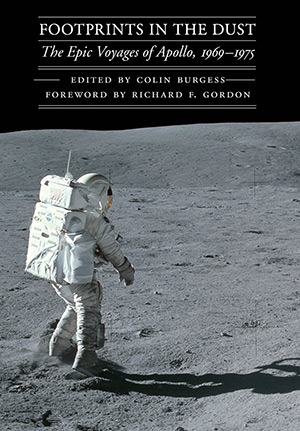 This is not just another historical recounting of the Apollo missions to join the numerous ones published since Neil Armstrong and Buzz Aldrin first set foot on our closest celestial body. The book comes after the 40th anniversary of this momentous mission to the Moon and is a fascinating compilation of articles about the era: from President Kennedy’s Moon challenge through the Apollo and Skylab missions to the end of the era with the Apollo-Soyuz Test Mission. Nine writers in twelve chapters cover not only the historical facts, but the human side, including civilian and astronaut perspectives. The Soviet Union’s perspective is represented as well, because their successes and failures helped mold the spaceflight history that enfolded.

Editor Colin Burgess has written on a diverse array of subjects since 1985, mostly biographical with a concentration on spaceflight history. He is an editor for the University of Nebraska’s excellent “Outward Odyssey: A People’s History of Spaceflight” series, of which this book is a part. He has also published other books, including: Teacher in Space: Christa McAuliffe and the Challenger Legacy and Fallen Astronauts: Heroes Who Died Reaching for the Moon. Other contributors, whom Burgess calls his ‘cadre of space flight enthusiasts’ include: Philip Baker, Geoffrey Bowman, Stephen Cass (a senior editor at Discover Magazine), Melvin Croft, Rick Houston (coauthor of Go Flight), Robert Pearlman (known for Collect Space), Dominic Phelan, Simon Vaughan and John Youskauskas. Some of the authors are not American and thus add a unique perspective to the history.

The articles are presented primarily in the order of chronological events. While the historical events are pretty well known to space enthusiasts, it is the writers’ approaches to the material that makes it interesting. The various authors have interviewed many of the players, including astronauts, cosmonauts, civilians who have a passion about space, NASA and Soviet experts, and support staff, including support personnel for the particular missions. Included in the book are black and white pictures, charts and diagrams as well as a bibliography for further study. Biographies on each of the authors are also included at the end of the book.

Each article presents a progression of the program, from President Kennedy’s call to action to the early plans to build the spacecraft, through discussions of each mission, including the final one in 1975. Included in each segment is biographical information about the various personalities, and the socio-political climate of the time. It was very helpful that Soviet engineers and cosmonauts were more open about the successes and failures in their program when they were interviewed decades after the events took place.

As a student of history and a spaceflight educator with a concentration on the Apollo era, this reviewer was skeptical at first about learning anything new. On the contrary, the intricacies enmeshed in each article provided new information and new interpretations of the facts. For example, in the chapter entitled “The Eagle and the Bear” about the Soviet space program, I learned that the parties interviewed for the book felt the Soviets lost the space race because each agency was too suspicious of the others to successfully cooperate to get the job done.

Another interesting fact concerned the cause of the Apollo 13 failure. Those of us who have read space history and seen the movie Apollo 13 know that the problem was caused by an oxygen tank explosion in the Service Module. But what I didn’t appreciate until I read this book was that the explosion might have been prevented if the manufacturer had changed the thermostatic safety switches in the cryogenic tanks to operate at a new NASA mandated 65 volts on the ground as well as the 28 volts used by the spacecraft during flight.

This book is a chronicle of the dreams, setback and triumphs of those involved in the goal of landing humans on the Moon. The book is well written by experienced authors who have thoroughly researched their articles and presented the facts in ways to keep the reader interested. As a docent at an aerospace museum where I am responsible for teaching the public about the Apollo era, the book has provided answers to some of my questions and added to my knowledge of Apollo. I found it to be entirely enjoyable, stimulating, and highly recommend it to other NSS members.