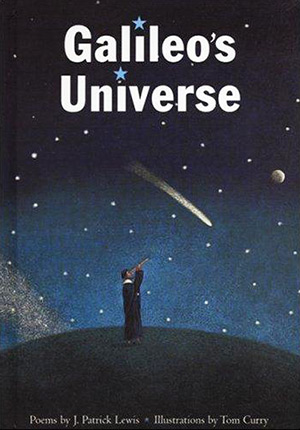 While checking for books to recommend to students as part of the 400th anniversary of Galileo’s use of the telescope in 1609, I discovered a simply amazing pop-up book published in 2005. Galileo’s Universe, by J. Patrick Lewis with illustrations by Tom Curry and paper engineering by Bruce Foster, is a delight to read and filled with fascinating pull-tabs and moving parts.

The book opens with a brief overview of Galileo’s place in history as the man who challenged the Catholic Church’s belief that the Earth was at the center of the universe. Galileo used observation and experiment to prove that the Earth revolves around the sun. He is also credited with either inventing or improving many devices for measuring time, temperature, position, and composition of objects.

The poems on each of seven spreads discuss major events and accomplishments in Galileo’s life. The pop-ups focus on his timing of the swings of a pendulum, his invention of a hydrostatic balance, the proof that objects fall at the same rate regardless of weight, his invention of a thermometer, work with trajectories, his use of the telescope, his problems with the church, and his place in history.

While rhyming text can be fun for young children, the rhymes in this book
sometimes resulted in sentences with unnatural rhythms and words chosen for their end sound rather than their meaning. For example:

At twenty-two, he blazed a trail
With his true hydrostatic scale
To measure weights and metals with
A blessing for the silversmith.

However, a plain prose explanation is included on the pull-out tab below this page (and similarly on others): “Soon after leaving the University of Pisa in 1586 without a degree, Galileo invented the hydrostatic balance, a device that could determine the proportion of precious metal (such as gold or silver) in an object by weighing it in water.” (My sources say that he left the university in 1585 — he was 22 in 1586.)

The tower of Pisa pop-up shows one large and one small ball hitting the ground together, which is an important thing to illustrate to children. However, the explanation about why the two balls land together is not provided. The reason is that gravity pulls on all objects equally, regardless of weight or size. The reason why we expect (and depending on the shape and size, we observe) a wooden ball or a feather to fall more slowly than a lead ball is because of air resistance. (Parents — try dropping a flat sheet of paper and one crunched up — they weigh the same but fall at different rates. Then try dropping two identical containers, one empty and one full — they weigh different amounts, but fall at the same rate.)

The chronology on the last page contains some dates that did not match with other sources I checked. I could not confirm that he “secretly admits to being a firm believer in the theories of Copernicus” in 1597 (my sources say 1604). Three dates appear to be off by a year: warned by the church in 1616 (my source says 1615); a test of a device for measuring longitude at sea in 1616 (my source says 1617), and is blind in 1638 (my source says 1637). This is a good example of why teachers require students to check facts against multiple sources!

The illustrations and pop-ups are truly outstanding, making the opening of each spread something to be done again and again. The art style is reminiscent of paintings from that era, and gives the book a timeless quality.

Galileo’s Universe does a good job of introducing this historical figure to a new generation of creative inventors in a format that will stimulate 3-D thinking and encourage them to observe and experiment to learn more about the universe.