Book Review: In the Shadow of Ares 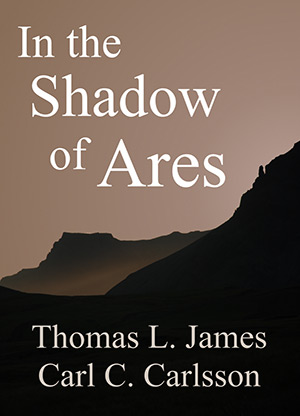 Note: This book is only available in electronic form for Kindle and Nook. If you don’t have one of these, you can still read it with free Kindle apps for computers, tablets, and smartphones.

Amber Jacobsen is 14 and still the only child on all of Mars. She lives with her celebrity parents in one of the original habitats until a pressure failure forces them to move. The Mars official who is supposed to help them has a personal grudge against Amber’s father and blocks his attempts to get replacement parts. Unable to repair their home, Amber’s mother, a renowned biologist, accepts a long-standing job offer at the largest independent settlement, while her dad returns to their home to salvage their belongings.

Amber’s family arrives at the new settlement in 2051 when it is only two weeks away from having its land claim “vested,” which requires the stamp of approval from the Mars Development Authority (MDA). The MDA’s power-hungry leaders, including Amber’s father’s nemesis, are threatening to take over the settlement if they find even the slightest infraction of environmental rules and safety regulations which they have recently made more stringent.

With no friends her age and the adults unwilling to give her meaningful work, Amber endeavors to solve the mystery of what happened to the Ares III crew who preceded her parents to Mars and were their close friends. Her research coupled with her exploration of the new settlement, uncovers a secret that puts her life and the future of the settlement at risk.

This is an e-book (available on Kindle and Nook), self-published, and it was written by two first-time authors, one of whom is a friend. I don’t usually review self-published books, especially by friends, because I rarely have much good to say about them. But this one was an exception, and I’m happy to recommend it.

Besides the setting being Mars, which is automatically appealing to space enthusiasts, young engineers are sure to love all the gadgets and tech described in this book. Kids entering space settlement design contests should especially enjoy the descriptions of the habitats, mining operations, and personal communication devices. (I hope one of them invents that cool flying backpack!) Adult space enthusiasts may want to read this book to discuss the ideas of how initial Mars settlements might be established and regulated.

The story is easy to follow and held my interest. The beginning is the weakest part of the book, though it’s not badly written. It opens with an adult viewpoint — not recommended for a YA book — and focuses on the unappealing subject of someone being space sick. I found myself questioning how professional astronauts would have let themselves get into that situation.

Amber is introduced during a TV interview that quickly cues us in on who she is and what’s happening on Mars. She’s a likeable character, but she felt younger than 14 to me, and could have easily been a boy. Growing up in isolation could account for her tomboy personality, but I’ve never met a teen girl who didn’t have at least one crush on a boy or celebrity. Amber also didn’t fuss with her hair or clothes or cry about anything. Maybe the Martian frontier will mold such self-confident girls, but I found her a little too flawless.

Seeing the Martian frontier through Amber’s eyes was fun, though. I enjoyed her comparisons of technologies and accommodations between her tiny home habitat and the new large settlement.

This book is not for the sophisticated teen reader looking for deep thoughts and character growth or change. It is more like a graphic novel story without the art where the plot is paramount and the characters respond to events and circumstances. The motivations of the “villains” and “good guys” in the story are clearly stated — but how they go about achieving their goals is full of twists and turns that makes for an exciting ending.

While reading the final chapters, I ignored email and stayed up late because I had to know what happened. If your preteen or teen has Kindle or a Nook and wants to escape the bounds of Earth for a few days, In the Shadow of Ares offers a pleasant vacation.