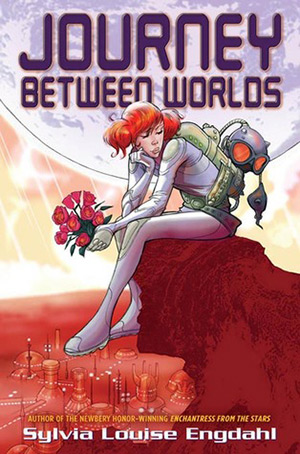 Melinda never wanted to go to Mars, yet she ends up living there. Journey Between Worlds is the first-person narrative of how this very down-to-Earth young woman is forced to choose between the life she had planned for herself and a very different one presented to her on Mars.

The book begins with a description of her life in Oregon just before high school graduation. She plans to attend college to become a teacher, marry her high school boyfriend Ross, and live in her grandmother’s house on the Oregon coast. Her plans are disrupted when her father gives her a trip to Mars as a graduation present. She discovers that he and her mother (who died when Melinda was young) had once planned to immigrate to Mars. Now he’s too old to move there, but his company is sending him to open a Mars office. He sees the trip as a chance for the two of them to reconnect (he travels a lot, and Melinda has been raised by her grandmother). Melinda is all set to turn down the gift, but an argument with Ross changes her mind. At the space station, she meets a young man named Alex who is from Mars. Her roommate on the ship to Mars is a young scientist named Janet who resents being “forced” to go to Mars to complete her biological studies. Melinda remains skeptical about the value of colonizing Mars despite the gentle arguments in favor of it from her father and Alex. Janet provides an opposing viewpoint. Melinda is homesick for Earth and has trouble adjusting to life on Mars. To help pass the time, she takes college courses and does some teaching. She forms close ties to Alex and his family. Just when it is finally time to return to Earth, there is an accident that changes everything. Without giving away the details, what finally convinces Melinda to remain on Mars is her love for the people in her life.

Space enthusiasts will find all their arguments for settling space and colonizing Mars articulated in the pages of this book. Yet no technical knowledge or expertise is required to appreciate the straightforward and realistic story of a young woman reconsidering the options for her future. Should she marry Ross? Is her father right about living on Mars? How can she judge something without ever trying it? Young adults should relate well to Melinda, a girl who knows what she wants (or at least thinks she does!). Some space enthusiasts may be initially put off by Melinda’s negative attitude towards Mars, but will want to read on to discover what changes her mind (and use these arguments on their friends!) Knowing the ending ahead of time muted my emotional involvement with the story, though it was still interesting enough to keep me reading.

The author did an excellent job of creating a scientifically plausible future. The transition from freefall to artificial gravity enroute to Mars is nicely done, and the time spans and cost involved for trips are realistic. The use of spacesuits and shuttles and descriptions of the habitats and support systems were consistent with current studies with the exception of the communications system. Melinda experiences more than just the Earth-Mars time-lag when sending messages to Earth, and has to pay a premium for them. Communications would be a priority for the safety, psychological and technical support of early settlements and would surely be provided cheaply if not free to all inhabitants. When I shared a copy of this review with the author, she explained that the communications setup is an artifact of the book’s original version published in 1970. The only other technical issue I noticed was the assumed ability to hear someone speak by touching space helmets. I’ve been told that astronauts have tested this and found that it does not work. Lip reading or using Morse code via eye blinks would therefore be good skills to have if you need a non-radio way to communicate while in a spacesuit!

Journey Between Worlds is a must-read for all future space pioneers who wish to persuade their friends to join them in making that future journey between the worlds of the known and the unknown. I highly recommend it. I also highly recommend Engdahl’s newly reprinted Newbery Honor book, Enchantress from the Stars, that deals with first contact in a most fascinating way.