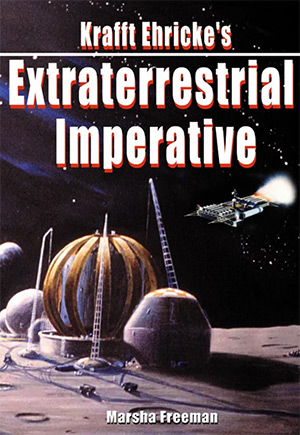 The space engineer is the environmentalist’s greatest ally. — Krafft Ehricke

Renowned NASA planetologist Wendell Mendell described Krafft Ehricke as “one of the great minds of our era” (Ad Astra, May/June 1996, p. 31) and Apollo 17 astronaut Harrison Schmitt states in this book’s foreword that “Ehricke has taken his place among the intellectual and philosophical elite of our time.” Yet this visionary thinker on the industrialization and settlement of space remains relatively unknown and his works have been largely unpublished. Marsha Freeman and Apogee Books deserve great credit in making his inspirational work more accessible.

Ehricke’s philosophy of the Extraterrestrial Imperative was based in part on the evolutionary tendency of living things to expand into new territories and in part on the need to transcend the limits of one small planet and assure the longterm future of humanity by utilizing the vast resources of space. He also hoped and predicted that the movement of humanity into space would usher in a new Age of Reason.

Krafft Ehricke (1917-1984) was a gifted aerospace engineer who worked at Peenemünde with Wernher von Braun’s team. Later, he developed the Centaur liquid-hydrogen upper stage rocket which literally opened up the entire solar system to robotic exploration. The first third of the book is an interesting and illuminating biography of Ehricke, beginning at age 12 when he was inspired by a dozen viewings of the 1929 Fritz Lang film Frau im Mond (“Woman in the Moon”).

The second two-thirds of the book consists of a varied selection of Ehricke’s non-technical writings, from a 1948 fictional short-story account of the first manned Mars mission (“Expedition Ares”) to a remarkable 1967 paper on “Space Tourism” that would hold its own today, to a 1984 paper summarizing some two decades of his work entitled “Lunar Industrialization and Settlement – Birth of a Polyglobal Civilization.”

Ehricke wrote three books that remain unpublished. The first, entitled The Extraterrestrial Imperative: From Closed to Open World, was completed in 1971. Ehricke could not find a publisher because the book contradicted the gloom-and-doom, limits-to-growth philosophies that were so prevalent at the time. Although the current book only contains a three page excerpt from Ehricke’s Imperative, Freeman also includes a few of Ehricke’s essays on the subject.

The second unpublished book was The Seventh Continent: The Industrialization and Settlement of the Moon, written during the last ten years of Ehricke’s life. This book was also passed over by publishers for not being politically correct — they considered it too pro-nuclear to be accepted by the public.

In a personal communication with author Marsha Freeman, she stated that The Seventh Continent was actually a rewrite and significant expansion of the earlier book on The Extraterrestrial Imperative — resulting in what can be considered Ehricke’s life legacy. The final version was in German because a German publisher had agreed to publish it. However, the publisher changed ownership while the galleys were in proof and the book was never printed. The Fusion Energy Foundation later contracted to publish the work in English. A translator was hired, with Ehricke proofing the results, but the work stopped when Ehricke passed away before half of the translation was completed. The family later established the Krafft Ehricke Institute in hopes of raising funds to complete the project, but 25 years have now passed and nothing ever came of it. Freeman is pessimistic that the work will ever be published, and efforts on the part of NSS to get the work published online have not been successful.

The third unpublished book that Ehricke worked on in his final years was his Collected Works. Krafft Ehricke’s Extraterrestrial Imperative can be considered a highly abridged version of this.

Either of the two sections of Krafft Ehricke’s Extraterrestrial Imperative – the biography or the selected works – is alone worth the price of admission. It is my hope that this book will increase interest in Ehricke and eventually spur the publication of his larger work.