Book Review: Life as We Do Not Know It, The NASA Search for (and Synthesis of) Alien Life 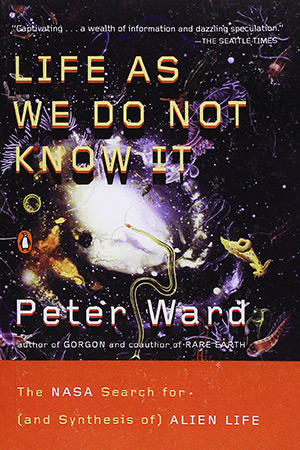 Following the trail blazed in earlier collaborations with Donald Brownlee, which led to the provocative Rare Earth: Why Complex Life is Uncommon in the Universe and The Life and Death of Planet Earth, Ward’s latest offering, Life as We Do Not Know It, sets a research agenda aimed at unraveling science’s most profound questions: What is life, and where does it exist?

To that query, he adds this philosophical discussion: What is humanity’s role in life’s unfolding on Earth and in the rest of the Solar System?

With such weighty subject matter, it would be easy to write a purely academic treatise — indeed, the book contains some original scientific proposals — but this challenging volume is eminently readable. Ward’s comfortable style delivers ample doses of personal warmth and humor along with a wealth of information and dazzling speculation.

Ward is a leader among the growing number of scientists who describe their field of inquiry as astrobiology or exobiology. Those researchers investigate processes on other worlds that could lead to or result from Earthlike life. He draws most of the content of the book from the work of colleagues in the 15 research institutions that operate worldwide under the umbrella of the NASA Astrobiology Institute (NAI).

As principal investigator of the UW node of the NAI, Ward naturally emphasizes the work of his own group. But this is not a parochial or self-serving narrative. It is a fascinating guided tour that begins in the varied environments and laboratories of our own planet (including some where researchers are creating synthetic life) and then proceeds to the most likely and a few unlikely bodies of Solar System where evidence of past or present life may be found.

He admits that to some of his fellow scientists, his “new hypotheses…will be heresy.” But heresy often graduates to serious inquiry as a new field matures. “We are just beginning to realize the diversity of life that is possible in this biological universe,” he argues in the Preface. “Most of it may be called life as we do not know it.”

The book begins by challenging readers’ visions of recognizable organisms living in familiar environments. Ward describes a trip on the famous submersible Alvin on a remarkable day in 1978. The crew descended first through the domains of familiar aquatic fauna, then past the realm of exotic and grotesque denizens of the shadowy depths, to the solidified volcanic rock of the ocean basin more than two miles deep.

This was also a trip back in time. The deeper Alvin went, the more primitive were the creatures and environments it encountered. At last the crew spotted the ocean floor. “Stark, lifeless, it resembled all the sea bottoms from the time before the Cambrian explosion, that moment 550 million years ago when the animal phyla sprang into existence. For 3.5 billion years prior to that moment, all sea bottoms had been barren of any life but microbes.”

Suddenly, the startled scientists found their small craft surrounded by a profusion of life, flourishing around rocky chimneys venting smoke-like black clouds of minerals and superheated water. They had discovered, for all intents and purposes, an alien ecology. This community of life drew its energy not from the sun but from the planet’s inner heat. The microbes at the bottom of the food chain thrived in extremely hot, brackish water under exceedingly high pressures.

Today, science knows of many such life-forms that live under extremely hot, cold, or harsh conditions on and within Earth’s crust and bodies of water. The discovery of such “extremophiles” reveals that life is versatile and arises or thrives readily in a much broader range of environments than people once thought possible — environments not unlike those on Mars or elsewhere in the Solar System.

But what is life, and how can people recognize it? Ward begins with a generally agreed-upon set of criteria — life metabolizes, has complexity and organization, reproduces, develops, evolves, and is autonomous — but then proposes the controversial hypothesis that this definition should include viruses.

Most scientists argue that viruses are not alive because they cannot reproduce on their own and do not belong to any of the three taxonomic domains (a recently added category of classification above kingdoms) of life: bacteria, archaea, and eukarya. They are nonliving parasites that hijack the reproductive machinery of living cells.

Some viruses have only single-stranded RNA, not the double-helix DNA. Ward makes the case that primitive ancestors of RNA viruses may have had the ability to reproduce but lost it when they evolved into parasites. To accommodate them into the tree of life he proposes yet another level of taxonomy, the dominion.

From RNA life, Ward moves ahead to several other forms of “life as we do not know it” that might exist on Earth or elsewhere. Earth life (including viruses), which he calls dominion Terroa, has certain restrictions that are plausibly not required for achieving the criteria noted above. The DNA helix can spiral in either the left- or right-handed sense and can encode for many more than the 20 amino acids that are part of life on Earth, but evolution has led to Terroans with only left-handed DNA molecules and just those 20 amino-acid building blocks for proteins.

Conditions on Earth favor DNA and carbon-based life, but scientists have conceived of life founded on different chemistries, such as silicon-based molecules called silanes. These would lead to non-Terroan dominions that might exist in other planetary environments. Approximately half of the book is devoted to examining how and where such dominions might arise in present times or have arisen earlier in the history of the Solar System.

Ward leaves no solar-system world unvisited. He quickly dismisses Mercury but spends a number of pages discussing the possibility of life floating high in the sulfuric-acid-laced clouds of Venus.

As expected, Mars gets the most attention outside of Earth. The red planet once had seas, lakes, and flowing water — perhaps long enough for simple multi-cellular life to evolve. Bacterial life beneath its surface today is conceivable, and ancient Martian bacterial life would certainly have left its signature in the rocks. Some scientists claim to have already seen such evidence in an Antarctic meteorite known as ALH84001, but others vigorously criticize their conclusions.

The current favorite place to look for existing life beyond Earth is beneath the ice covering a global ocean on Jupiter’s moon Europa. Ward argues that a better bet would be Saturn’s largest satellite, Titan, with its thick atmosphere and hydrocarbon lakes.

In perhaps the book’s most vivid section, he describes what an astronaut landing on Titan might encounter in one of its craters: “a phantasmagoric wonderland of hydrocarbon fluid, ice, sludge, and rock, all arrayed in frozen glory…. At a temperature of -180°C the steaming geysers of methane venting from the warmer interior instantly freeze and then fall as black organic snow while other organic liquids are belched out from a nearby fumarole.”

Would that astronaut find signs of life? Titan’s rich and dynamic environment might be just what life needs. Astrobiologists like Ward can imagine carbon-based life on Titan with either ammonia or water as its vital solvent. The moon’s extreme conditions might even favor silicon-based life. Ward proposes sending a biochemist there to find out.

Though it’s unlikely for such a trip to be put on NASA’s immediate agenda, Ward’s suggestion will certainly not be rejected out of hand for the long term. If that trip to Titan takes place, it will surely be preceded by a return trip to the Moon and then an expedition to Mars, both seeking signs of life’s earliest history. Geologists on the Moon will collect ancient pieces of Earth and other planets that were transported there by asteroid bombardment during the earliest epoch of the Solar System.

Ward’s choice for the first scientist on Mars would be a paleontologist who could dig up a few fossils like the ones claimed for ALH84001. By the time they finish this wonderful book, readers will have no doubt that the author wishes he were young enough to sign up for the job.