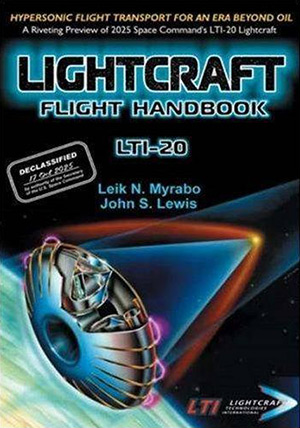 I don’t quite know how to classify this book. It might be diamond-hard-core science fiction. On the other hand, it could be a chronicle of some of the most advanced thinking being done today on the problem of escaping Earth’s gravity well in an economical and sustainable fashion. Finally, it just might be an artifact sent back from sixteen years in the future. A strong case can be made for all three possibilities.

The book is the flight handbook for the LTI-20, an electromagnetically-powered military spacecraft produced by a company named Lightcraft Technologies Incorporated (LTI). LTI is a real company that exists in 2009 in New York State. It is engaged in the development of spacecraft powered by beams of light or microwave energy. The LTI-20 represents the culmination of this effort that will be/was rolled out in December of 2025.

The principal author of the book, Leik Myrabo is a current-day professor at Rensselear Polytechnic Institute. He has been working on the development of light-powered spacecraft for more than 30 years. During that span of years, he and multiple generations of students have confronted the challenges of creating spacecraft powered by electromagnetic energy rather than by traditional rockets. The book details how. In the process, they have addressed far more than just how to power such a vehicle. Also considered are how to protect the crew from cosmic rays, how to create artificial gravity to prevent bone loss, how to survive accelerations of up to 200g’s, and how to survive the destruction of the lightcraft.

The book is divided into sections, like a real flight manual would be. Each section covers a major lightcraft system. Among the areas covered are:

Beyond the systems, operational modes are also covered, and the theory behind the revolutionary propulsion ideas is explained.

It has been said that truth is often stranger than fiction. In this case it may be so. Myrabo and his team have been diligently working on lightcraft development for several decades and have made major progress. The breakthrough propulsion methods they have been perfecting are being tested in the lab, and so far are living up to expectations. Imagine accelerating from a hover just above the ground to orbit in just a few minutes, without spewing tons of combustion products into the atmosphere, and without emitting a roar that would wake the dead. The lightcraft’s propulsion system is totally silent, with the possible exception of some crackling from electric arcs as the air around the craft heats into a plasma. There isn’t even a sonic boom when the lightcraft passes through Mach 1. This makes a lightcraft ideal for a stealthy covert mission.

Profusely illustrated with drawings and a large section of stunning color plates of lightcraft in flight, as well as photos of lab tests of the aerospike created by atmospheric breakdown, the Lightcraft Flight Handbook LTI-20 contains enough cutting edge ideas to seed a couple of dozen PhD dissertations. Beyond that, it just might translate into a means to finally break the Earth’s tenacious grip on humanity.