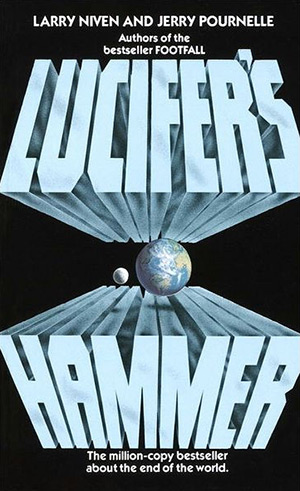 Lucifer’s Hammer is probably the first novel to describe realistically the effects of a comet striking the planet Earth. Rather than a hero story, like the movies Armageddon

, Lucifer’s Hammer is more like a 1970s disaster film, such as The Towering Inferno, Earthquake, or the awful Meteor

. In a disaster film, the story begins by introducing a large, star-studded cast of characters, often with varying degrees of likeability or ethics, and then threatens them with death from natural forces. Some characters live; some die; the survivors usually learn some underlying lesson; and life goes on. This is the shape Niven and Pournelle gave to Lucifer’s Hammer, and the book offers lessons for space advocates today.

The first part of the novel describes characters living in urban and rural Southern California. The main characters (the ones who would be played by the big-name stars in a movie) include Tim Hamner, a millionaire and amateur astronomer who discovers the comet; Senator Arthur Jellison, a conservative lawmaker who owns a farm in the San Joaquin Valley; Maureen Jellison, his daughter and political aide; and Harvey Randall, a filmmaker who makes a documentary about Hamner’s comet (later called “The Hammer”). Other players are often caricatures: cops, socialites, secretaries, political functionaries, gang members, fundamentalist preachers, scientists, and even a heroic mailman.

One common feature of Niven-Pournelle collaborations is a healthy dose of lecturing, which can be wearing at times. One such lecture informs the reader what we stand to lose:

Whole nation depends on technology. Stop the wheels for two days and you’d have riots. No place is more than two meals from a revolution. Think of Los Angeles or New York with no electricity. Or a longer view, fertilizer plants stop. Or a longer view yet, no technology for ten years. What happens to our standard of living? … Yet the damned fools won’t pay ten minutes’ attention a day to science and technology.

Another regular feature of these collaborations is a wicked sense of humor, often Niven’s. During an interview with a couple of scientists, someone asks what the density of a comet is; they finally compare it to ice cream, resulting in the following lines:

“I like it! Let’s hit Earth with a cubic mile of hot fudge sundae.”

“Hey, did you know that Hot Fudge Sundae falls on a Tuesdae this month?”

When I first read this book, I was most interested in the preparations characters made as the comet approached. It reminded me of the mob scenes Florida has before a hurricane hits. Some literally “head for the hills.” A scientist carefully preserves useful books in plastic bags filled with bug spray and mothballs before hiding them in a septic tank for later retrieval. And then there is this detailed account of Harvey Randall’s shopping run on the day before Hammerfall:

Next door, a good set of carving knives. They’d needed new kitchen knives for a year. He also bought a sharpening stone and a hand-operated knife sharpener.

There was a tool kit he’d been wanting for years, and this was the time, he decided. While he was in the hardware store he picked up other odds and ends. Plastic plumbing parts, cheap stuff, that would thread onto iron pipe. There might be a use for it one day, if; and it would be handy around the house if not.

As preparations continue, the Hammer falls:

Columns of superheated air stream up into the stratosphere, carrying millions of tons of dust and vaporized soil. Winds rush inward toward the rising air; as they cross the turning world their paths are deflected into half a dozen counterclockwise spirals. Eddies form in the spirals and are thrown off as hurricanes.

There is much more, but consider this: scientists have since determined that an asteroid strike would actually be much worse than what is depicted in Lucifer’s Hammer: massive fireballs roasting half the planet in 500-degree heat; the ozone layer destroyed; acid rain killing vegetation and poisoning the soil. The book only shows a fall into barbarism rather than extinction.

Two societies form in post-Hammerfall California: a near-feudal meritocracy centered around Senator Jellison’s farm, and an anti-technological gang of cannibals who live off only what they can pillage and steal.

Niven and Pournelle give the anti-technologists a chance to speak for themselves; and their words are not much different from what we hear from radical environmentalist groups today:

“Atomic power makes people think you can solve problems with technology. Bigger and bigger. More quick fixes. You have the power so you use it and soon you need more and then you’re ripping ten billion tons a year of coal out of the earth. Pollution. Cities so big they rot in the center. Ghettoes. Don’t you see? Atomic power makes it easy to live out of balance with nature.”

The stakes are thus set: anti-technology on one side and a return to technological civilization on the other.

Hammer was written before the theory of a space-based “dinosaur killer” became popular. As Niven notes in Playgrounds of the Mind

, Luis Alvarez declared, “The dinosaurs were killed by Lucifer’s Hammer!” In the 30 years since the book first came out, the impact theory is now well documented. Lucifer’s Hammer was ahead of its time.

Why should NSS members read Lucifer’s Hammer? For one thing, the political arguments in the book haven’t gone away, and if anything we’ve become more dependent on our technology in the last 30 years. We have so much more to lose, even if a “small” asteroid or comet (less than a kilometer diameter) hits us. Lucifer’s Hammer shows us the consequences of those losses and offers plenty of reasons for NSS members to support asteroid defenses and a spacefaring civilization. The alternatives are far, far worse.