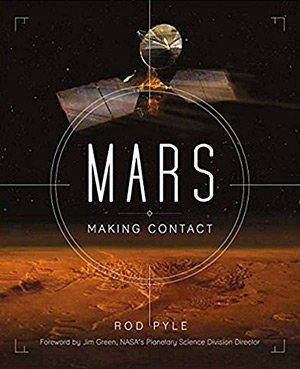 This is a book about Mars mission failures as well as successes and the engineering involved. Rod Pyle’s latest book adds to his previous works on space exploration, involving NASA’s Jet Propulsion Laboratory’s exploration of Mars to date—including flybys, probes and rovers in missions that span almost sixty years. The author successfully distills the often technical and incomprehensible raw data collected by these craft into a captivating collection of highlights in under two hundred pages, including illustrations.

Pyle begins with a bit of history, the early observations of Mars and speculation such as a planet-wide empire criss-crossed by canals. Very quickly, the book slaps us with reality as to what the planet is like—an austere, cold and dry place. This pessimism doesn’t last though. The book quickly delves into the possibilities of an exciting and mysterious place.

The book is also a fascinating look at the evolution of technology and human ingenuity. Before the first man stepped on the Moon, vessels already attempted to voyage to Mars, some even making it. The quality of illustrations becomes visibly more detailed further into the book, with the early ones displaying the ingenuity of using the technology available at that time.  Pyle conveys the challenges of using clunky automation that has to operate far from Earth over time delays of many minutes at slow data speeds.  Another example of challenges is relayed in the book’s descriptions of the hostile environment of freezing temperatures and continual radiation bombardment.  Both of these take a heavy toll on the lifespan of robotic rovers, a point that Pyle reinforces several times.

The curse of the Martian atmosphere is that it is too thin to appreciatively slow down landers, but is thick enough to cause thermal challenges of overheating. Even testing electronics prior to launch is a trade-off. The electronics need to be pushed to a limit to ensure they will perform where needed, yet doing that very thing will also destroy them before lift off from Earth. These are the kinds of choices that the engineering teams made in planning the missions.

The book is loaded with illustrations including photographs of Martian features, spaceships, people involved, maps, charts, trajectory diagrams, other explanations, artist impressions, and photos of assorted mementos. True to contemporary cultural practice, even some selfies, accomplished by assembling a series of pictures taken by rovers during various arm orientations, grace the pages.

The writing style is concise yet also visually descriptive of mission development cycles, costs and politics, plus the planning, design and execution of those that succeeded and those that failed. The book includes diagrams and photos never before released to the general public. Also, some of the key players in these missions discuss little-known topics such as the Great Galactic Ghoul, an invented whimsical creature blamed for glitches causing missions to go awry.

Among the noteworthy missions is the plucky Pathfinder. This is a particularly interesting one because of the controversial solution to a big problem, how to safely land a heavy collection of sensitive electronics and mechanics, so that it works after impact. The solution was an assembly of inflatable, protective airbags, deflating after bouncing along the surface. Many of the older hands considered it ridiculous including one who said, “Stupid idea.” Nevertheless, it worked.  After a successful landing, the Sojourner continued to roam the Martian surface while isolated from any assistance other than software commands and patches transmitted from Earth.

Another is the Mars Climate Orbiter, a lesson learned from failure. All was going as planned until, when during aerobraking through the Martian atmosphere, the vessel went silent, suddenly. The cause of the Mars Climate Orbiter failure was classic, a mix up of metric with imperial units. A few months later, similar issues happened with the Mars Polar Lander. After months of sleuthing via data entrails, mission personnel determined that software mistook a jolt for an unfolding landing leg. This mislead the software to prematurely shut off the engine during descent.

The ending chapter describes future missions, including a Mars Exploration Timeline which begins with the USSR’s Marnik 1 that failed to reach Earth orbit in 1960 all the way to InSight, a U.S. Mars Lander whose launch date has been rescheduled to 2018. Because humans eventually desire to explore Mars themselves, this chapter describes some of the current plans on accomplishing this. After learning about challenges from earlier missions, readers may better appreciate the scope of issues future missions may encounter. Among these are entry through the Martian atmosphere and the failure of electronics that inevitably occurs as a result of radiation. Yet despite the challenges, humans are inspired to keep on going and going, onward to Mars.

I recommend this book to those who are curious about space history and technology in general. This is more than a factual chronology of missions. It is rich in stories about challenges and how they were solved, the thrill of surprises and the agony of failures. Until people actually visit, this could be as close as most of us will ever get to visiting Mars.