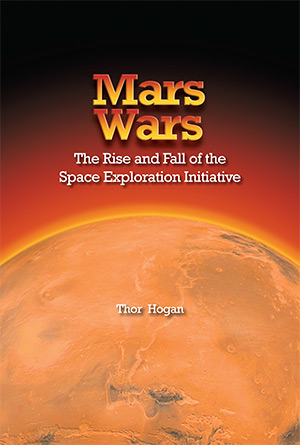 January 2008 will mark the fourth anniversary of President George W. Bush’s speech at NASA Headquarters that unveiled the Vision for Space Exploration, the long-term plan that gave the space agency a new direction, away from the space shuttle and space station and towards a human return to the Moon and, eventually, human missions to Mars. At that time the announcement drew comparisons to the Space Exploration Initiative (SEI), the last major effort by a president to reshape the direction of NASA, with corresponding concerns that the Vision would meet a similar, unfortunate fate. Yet the Vision is alive and well today (despite some concerns about its implementation), while SEI had effectively been dead long before it could reach its fourth anniversary. What caused SEI to fail, and what lessons did its failure provide future initiatives, like the Vision? These are questions explored in depth by Thor Hogan’s history of SEI, Mars Wars.

The book (which can be read online for free) is, at its core, a thorough history of the SEI. When George H. W. Bush became president in 1989, there was a perception by many that NASA was on a downward slide, and that a new direction was needed, particularly in human spaceflight. That perception, along with the reconstitution of the National Space Council led by Vice President Dan Quayle, provided an opportunity to develop a new space exploration plan, leading to Bush’s July 20, 1989 speech where he outlined the plan that would become SEI: completing the space station, returning to the Moon, and going on to Mars. What followed, of course, is familiar to most people with some familiarity with space history: NASA came back with the infamous “90-Day Study” that put a price tag on the order of a half-trillion dollars for the thirty-year SEI plan; there was corresponding outrage, both on Capitol Hill and within the White House; and the concept faded away when Congress allocated only a sliver of the requested budget for SEI for 1991.

Hogan goes beyond a simple recounting of history in Mars Wars to look at some of the reasons why SEI failed. First and foremost, arguably, were the conflicts between the White House and NASA administrator Richard Truly. The Space Council expressed “outright shock” at the 90-Day Study and its lack of real alternatives (Mark Albrecht, executive secretary of the National Space Council at the time, said in an interview for the book that the report “was the biggest ‘F’ flunk you could ever get in government”), while Truly and some others in NASA felt that the White House didn’t understand the technical complexities and associated costs with such an exploration architecture. That fractured relationship made it all the more difficult to sell SEI to a skeptical Congress, particularly given the sticker shock created by the 90-Day Study.

The last part of Mars Wars tries to put the failure of SEI in a political science context, using concepts like policy streams and punctuated equilibrium theory that can get a little dense for non-academics. Hogan, though, does identify some lessons learned from SEI’s failure: the lack of clear policy guidance from the White House, the failure by the administration to adequately brief Congress on SEI before its public announcement, and, interestingly, that “NASA needs competition for ideas from other space policy community actors.” The Vision for Space Exploration has avoided those pitfalls to date, perhaps primarily because of the closer cooperation between the White House and NASA during the plan’s formulation than during SEI. “To ensure the success of future efforts to send humans to Mars,” Hogan writes at the end of Mars Wars, “current and future policy makers must learn the lessons of SEI.” The relative success of the Vision to date (as measured by its survival, if nothing else) relative to SEI suggests that key policymakers have indeed learned those lessons; for those uncertain as to what those lessons are, Mars Wars provides a good review of what went wrong with SEI, and why.