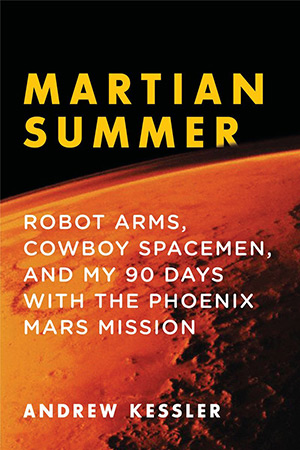 Plenty of popular science titles are well-written, informative reads, but there aren’t many that make you want to invite the author over for a beer to talk science. This book will. Who could resist Kessler’s infectious blend of triumph and frustration, new horizons, and self-deprecating humor? Who wouldn’t want to share this scientific adventure of a lifetime?

After a year of dedicated catch-up on everything from geology and Martian climatology to orbital mechanics and chemical analysis, Kessler won the space nerd lottery and earned a very tiny role as backseat chronicler of the 2009 Phoenix Mars Lander mission, sent to search for ice water on the Red Planet’s north pole.

Phoenix Mission Control ran on a shoestring budget out of a somewhat grungy vacant space at the University of Arizona in Tucson. The Phoenix Lander itself was a hand-me-down, reconstituted from an unused Mars Polar Lander, left over from the notorious NASA Mars Surveyor ’98 program. Despite troubled origins and the frustrating push-me-pull-you of JPL and NASA-generated red tape, Phoenix rose to its task and succeeded triumphantly.

Kessler began his adventure with all the infectious enthusiasm and cheer of a kid in a candy shop, but his eagerness was soon tempered by the discovery of how much he still had left to learn. One year’s study wasn’t nearly enough. The first task was to learn a new language, one festooned with cryptic acronyms: RA (robot arm), RAC (robot arm camera), SSI (surface stereo imager), MECA (Microscopy, Electrochemistry, and Conductivity Analyzer), and TEGA (Thermal Evolved Gas Analyzer), a “robotic nose” for sniffing out the chemical makeup of the regolith samples scooped up by the RA.

Next came the challenge of adapting to Mars time. To take full advantage of the mission’s limited 90 days, Phoenix scientists worked by the sol — a Mars “day,” about 40 minutes longer than Earth’s. However, shifting to Mars time had serious consequences far beyond going to work and coming home at strange times. Body chemistry gets thrown out of whack. Persistent headaches and erratic mood swings wear you down. This is just what a tight-knit group of researchers needs when everything’s on a tight schedule and everyone’s competing for mission time, and even worse for the journalist who hopes to gain intimate insights into the work going on around him.

Although he never met any hostility from his subjects, Kessler never experienced a bonding experience with his fellow travellers. Frankly, no one had time for it. Phoenix’s scientists were working with limited time, limited budgets, and frequently limited freedom when it came to sharing hopes and fears, ideas and theories. Both JPL and NASA had strict rules about the flow of information to the outside world. Additionally, no researcher wanted to get scooped by having a reporter leak word of some cutting edge discovery before solid confirmation and then official publication, preferably some place with peer review.

Tempers tightened as inevitable problems arose. After all, you can’t see what your trusty Robot Arm is really doing millions of miles from home; the 30 minute communication lag between Mars and Earth just makes it worse.

Days were lost working out just why TEGA said it had no sample to analyze when the RA insisted it delivered one. Worse was the time wasted dealing with the brouhaha raised when a reporter misinterpreted a noncommittal statement at a Phoenix press conference and announced that NASA was secretly briefing the President about the discovery of life on Mars. Weirdest of all was NASA’s blind insistence that Phoenix carry out experiments to prove it had found water — after it had already finished conclusive work to prove just that. But in the end, it was all worth it.

This is big, amazing science in all its frustration and glory, heroically executed despite penny-pinching and bureaucratic fiddling. Kessler never found a bosom companion during the Phoenix mission; instead, he gives us valuable insight into cutting-edge planetary research and the dedicated scientists who carry it out. For now, this is as hands-on as it gets, a fascinating blend of theory and experiment, mystery and constant wonder. This is a book for the scientific adventurer in all of us.