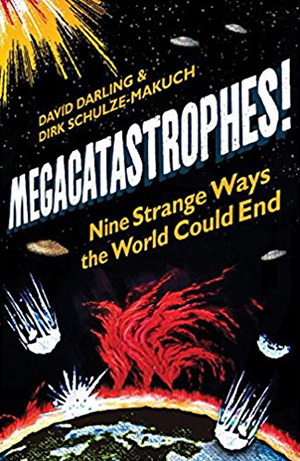 Someday, the world is going to end. The question is, how?

Astronomer David Darling and Washington State University astrobiologist Dirk Shulze-Makuch have come up with a list of nine threats to our humble world. Some might sound like fodder for the next Hollywood blockbuster, but in truth, everything discussed is statistically possible.

The show begins with threats closest to home: deadly problems we could actually bring upon ourselves. First up is the archetypical “gray goo” scenario: what if a nanotech project goes haywire, releasing hoards of tiny, self-replicating chemical machines that re-engineer all life on Earth into squishy, humming piles of “nano-sludge.” This section is a great primer on the uses as well as concerns about nanotechnology.

Another technology-run-amok problem turns the biggest dream of the particle physics community into our worst nightmare. The Large Hadron Collider is the most powerful accelerator ever built, but in its high-energy hunt for the Higgs boson particle, the authors confirm that it could also create miniscule black holes. A micro black hole might live long enough to “gulp down” a fair amount of our planet before it decayed away.

We could be engineering our own downfall from fast-mutating killer viruses and drug-resistant bacteria, like MRSA. The Plague wiped out large numbers in Europe and Asia, and the deadly 1819 Spanish Flu epidemic infected even more, approximately one third of Earth’s population. Given the distances now bridged by international business flights, it wouldn’t take long for a deadly disease to circle the globe.

From cyberterrorism to the compelling psychology of computer game addiction, computers are changing the way we live. Researchers are working on artificially intelligent systems that recognize and try to mimic human emotional responses — without actually feeling the emotion behind them. The authors point out that our very first “First Contact” scenario may involve dealing with a sentient, but very inhuman, computer.

After this bevy of homegrown troubles, it’s almost a relief when the authors move on to good old-fashioned “natural” disasters — that is, until you realize that these are threats over which we have absolutely no control. For example, magma seethes beneath Earth’s crust, and where the crust is thinnest, supervolcanoes slowly build to the breaking point. The 1883 Krakatoa eruption killed thousands — but the ash and dust it spewed into the atmosphere affected climate and weather patterns for years afterward.

With dark glee, the authors explain that statistically, a supervolcano explodes every 100,000 years. Then they point casually to the ancient Yellowstone caldera, due to blow “any time now.”

We have to move off-planet to examine the next level of possible disasters. Violent solar storms and flares can interfere with radio and satellite communications, potentially taking down the Internet. Long term, there’s also evidence that increased solar activity could result in a cooler-temperature star, bringing climate disruption, even Ice Ages.

Look a little further out and you find the possibility of death by giant asteroid impact — or “the big dumb rock scenario.” At least we have a shot at changing this outcome, given funding for tracking and steering incoming asteroids and comets out of the way. We’d have absolutely no chance to avoid a blast from a distant supernova. With its shockwave traveling at the speed of light, we literally wouldn’t see it until it hit us, baking the Earth with radiation.

Last but not least is the science-fictional “Dark Contact” scenario — not intelligent aliens, but alien bacteria or viruses. Stowaway bugs on satellites and space vehicles prove that the toughest can withstand hard vacuum and radiation, as well as lack of food and water. If hostile to human life, alien organisms, no matter how primitive, would be nearly impossible to fight.

Each chapter concludes with the Catastrophometer: the higher the reading, the more likely the event, and the more devastating its effects. Zero means no population loss; one is 10 million gone. At five, say goodbye to 1 billion people. Ten means complete extinction. The authors assign the highest (worst) score to Earth-based bugs, but the aliens aren’t far behind. The threat of solar variation ranks a mere two on the scale.

Darling and Schulze-Makuch deliver a light-hearted but thorough introduction to some truly fascinating science here. Earth doesn’t have a bright red bullseye painted on it — it doesn’t have to. These threats are all consequences of our existence in “a quiet backwater of an ordinary, middle-aged spiral galaxy, circling one of the more sedate kinds of stars.”

Charlene Brusso is a science writer/reviewer based outside Syracuse, N.Y.