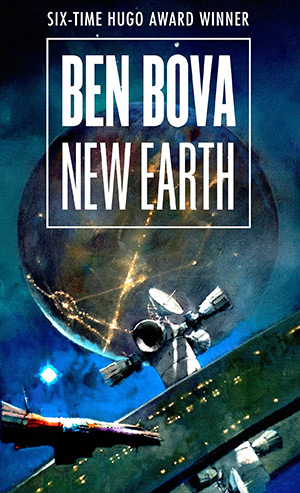 Theories abound today about the existence of alien life, raising many questions. Does it exist? Is it sentient? If so, why hasn’t such life contacted Earth? Many also believe that if intelligent aliens exist, they are likely far older than humans and may view us as infants, not yet ready to meet them. But what if there is a galactic danger threatening and these aliens need our help to save the universe? What extraordinary lengths would they go to to get our attention?

New Earth by Ben Bova is a story of just such a situation. An ancient alien race observing sentients throughout the galaxy believe that humans hold the key to preventing a disaster that will wipe out all life. But in order to enlist aid from humans, the aliens first have to entice the humans to come to them.

The author, Ben Bova, is a prolific writer of more than 100 works in both science fiction and science fact, a six-time winner of the Hugo Award, a former editor of Analog and Omni, and a past president of both the National Space Society and the Science Fiction and Fantasy Writers of America.

New Earth is a sequel to Farside, in which scientists had found an Earth-like planet in the Sirius system about eight light years from Earth. This planet has water oceans and an oxygen-rich, human-breathable atmosphere.

Earth is going through ecological, economic, social and political upheavals after two periods of global warming. Parts of Earth have been totally devastated, and millions of people have died. Earth has just emerged exhausted from the second destructive period, with little thought for interstellar exploration. However, such a trip might be the catalyst for healing the scars on Earth.

Amid indifference and hostility from world leaders, a group of eleven scientists led by an experienced administrator, Jordan Kell, set out on the journey to explore this new world, which they have named New Earth. It’s a journey taking more than eighty years, and the crew is realistic enough to understand that it is, in fact, a one-way trip. While they make the journey in cryosleep, 200 years will pass on Earth.

Once they arrive, they observe the planet from orbit and see a light emanating from the surface. This light appears to be of artificial origin, pulsing at regular intervals. The crew is divided on how to proceed. This division lasts throughout the story, pitting the players against each other. As scientists, they should be open to new ideas, but also need to consider if it is all a hoax.

Several of the crew, led by Kell, journey to the surface. What they find is amazing: an Earth-like planet complete with fauna and flora that are comparable with species on Earth. Even more astounding is the fact that the planet is inhabited by a small population of beings who have very human-like traits and appearance. There are many questions: How did this happen? Is it a hoax or parallel evolution?

The inhabitants don’t appear threatening. Kell becomes friends with the leader and a paramour of one of the women. The inhabitants also call their planet New Earth, leading to more disbelief. While the inhabitants are friendly, they are reticent to reveal much about themselves. The crew is divided as to their motivation and potential plans for the humans. However, it is slowly learned that they are not withholding information maliciously. Rather, they are waiting for the visitors from Earth to ask the right questions.

When they finally ask the right questions, they learn, among other things, that the planet is not a natural satellite. How and why it came to be is part of an astounding revelation that puts humans at the forefront of determining the fate of life in the universe. Will they accept the challenge this knowledge presents?

This book offers a fascinating journey not only to find a new world, but to find the inner strength to embrace the seemingly impossible. Bova has once again presented a story that kept me riveted while also presenting a scenario that addresses several major questions about the existence of alien life. I highly recommend it!