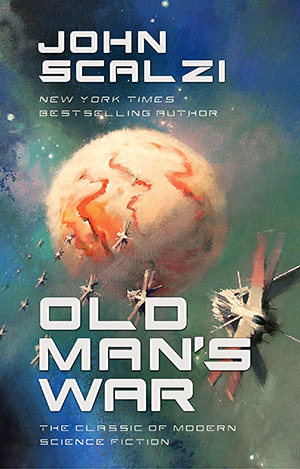 Old Man’s War by John Scalzi is a fascinating book with an intriguing premise: that people who have lived a full life are most capable, intellectually and emotionally, of appreciating its importance and thus defending the opportunity for future generations to enjoy a full life of their own. All the 75-year-old recruits lack is the physical stamina to be effective soldiers. Technology takes care of this problem, and also gives the recruits a motivation to join up: rather than stay on Earth and die of old age, they can be young again. The catch is that this reward comes with a very good chance of death in the first few years of service to the Colonial Defense Force.

The book follows main character John Perry, who has recently lost his wife to a stroke. He had already decided to join up when he turned 75, and now having to legally “die” and leave Earth forever is an even easier choice. He makes friends quickly with other recruits who dub themselves the “Old Farts.” Perry and his friends are transformed from retired writers, doctors, and physics teachers to young-again trained combat soldiers defending humanity against threats to its very existence. Amidst the constant fighting, sometimes against very unequal foes and other times against overwhelming forces, Perry struggles with the definition of what it means to be human. Is it right to destroy other living creatures, even cause them to go extinct, so that humans can co-opt their resources to continue to evolve and thrive? Does it matter if the enemy plans to eat you, or is only one-inch tall?

Perry’s personal question about the “worthiness” of humanity—and himself—to be saved is considered against the backdrop of his past relationship with his wife and current relationships with fellow soldiers. Through them, he discovers the motivation and strength to survive and continue fighting.

Those of us who feel that a future of humans living and working in space colonies spread throughout the galaxy is one worth fighting for will especially enjoy this story. People today, like the 75-year-old Perry when he first joins the army, may not fully understand that they are already engaged in the first phase of the struggle. For them to live a full life, have children and grandchildren, get an education and enjoy a career, requires a lot of resources. Those resources and the energy required to extract and process and transport them, are already a source of human conflict that will only grow as raw materials become scarce. If the future Perrys of the world want their children to have the same chance at a full life, then they should seriously consider joining the effort to protect the home world and supplement its resources with those from space. Whether or not those resources will or can be shared with other species is yet to be determined, but certainly something for space enthusiasts to contemplate. Maybe an army whose youngest recruits are 75 years old would provide the perspective needed to make space settlement the priority it is for the long-term survival of humanity? If someone can invent the technology to make me young again when I turn 75, I’ll be first in line to sign up!

This book is well crafted with a believable and likeable character, creative scientific ideas, and enough action to keep the plot moving. I highly recommend this book.