Book Review: On the Steel Breeze 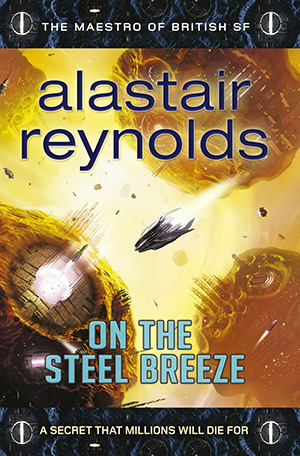 On the Steel Breeze picks up some time after the conclusion of the author’s earlier book Blue Remembered Earth, but returns us to Reynold’s “African” future universe, which chronicles the life and times of the Akinyas, a family that by sheer will and audacity become the pivots around which the human future revolves. This is a 482-page book, but once things get going, it’s hard to put down. Like most of Reynolds books, there are a number of mysteries the characters seek to solve.

In this book, Chiku Akinya, the daughter of Sunday and Jitendra Akinya from Blue Remembered Earth (who appear here as well), undertakes a daring plan. She has herself rebuilt as three clones with identical pasts, and a quantum implant that allows them to periodically exchange memories. One takes on the name Chiku Green and joins the caravan of holoships voyaging to Crucible, a distant world identified as the first target for human interstellar colonization. Chiku Red flies her own stripped-down ship deep into space to discover the final fate of Eunice Akinya, her grandmother, last seen blasting for the stars in her own experimental ship. Finally, Chiku Yellow stays on Earth as a backup, with the expectation that she will lead a quiet life.

Of course, being Akinyas, nothing quite goes as expected. In a tale told over decades (there is no faster than light travel here), we learn what happened to Eunice and Chiku Red. Chiku Green embarks on a daring series of adventures that eventually bring the holoships to a state of total war, and Chiku Green to a confrontation with the absolutely alien. Chiku Yellow’s quiet life is destroyed by a memory update sent by Chiku Green, and she is embroiled in a twilight struggle for the fate of humanity with a vast and relentless artificial intelligence (“artilect”) that has infected “the Mechanism” which runs this future world.

Reynolds is a master of the slow build up leading to apocalyptic action, and On the Steel Breeze is no exception. A grand struggle between humans and artificial intelligences concludes with a deadly battle using relativistic kinetic weapons on an interstellar scale in which negotiation is just as important as weaponry. The Akinyas are trapped in their vaulting ambition, forced to gamble for higher and higher stakes as the story proceeds. Their lives are long, but full of loss, since they find it hard to hang on to family and friends as time itself burns the bridge out from under their feet.

One thing I initially did not like about the plot is that the holoships are launched toward Crucible with no ability to slow them down. They are relying on human inventiveness to create drive improvements along the way, something that initially seems foolish. As time went on, I came to see this story device as the analogue to, for example, our continuation of industrial civilization in the face of increasing carbon dioxide buildup. We know we ought to stop, but we really don’t know how. However, we are confident we’ll figure it out — in time.

I read this book in the British Gollancz edition which was released before the American edition. The pacing is better than in Blue Remembered Earth, which suffered from a long slow interlude near the middle of the book. I highly recommend On the Steel Breeze, and expect it will be given strong consideration for a Hugo.