Book Review: Pillar to the Sky 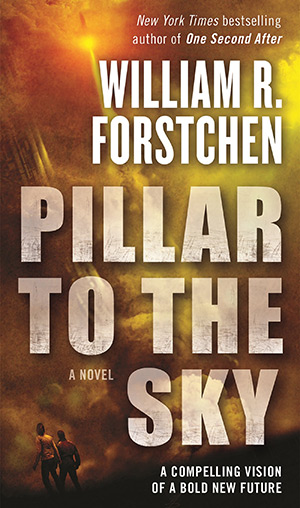 In this novel, Professor Erich Rothenberg, a rocket scientist at the Goddard Space Flight Center who had previously worked with von Braun, hires two young interns to flesh out the issues behind building a space elevator. One of the interns, Gary Morgan, sees nothing but insurmountable problems. The other intern, Eva Petrenko, is certain that these can all be overcome with hard work and ingenuity. She slowly brings Gary to her way of thinking as they work together to define the proposal.

The early part of the novel flips back and forth between their early discussions of the issues, and eighteen years later when their proposal is denied by the Senate committee that has oversight of NASA’s budget. The senator who leads the committee sees the proposal as a waste of taxpayer money in “these times of economic stress.” Gary and Eva, now married with a teenaged daughter, argue that the ‘Pillar’ could solve America’s issues of diminishing energy supplies and environmental crises, but find only one senator supporting them.

When their proposal is inevitably denied, Rothenberg takes them to meet a friend with vision, Franklin Smith. He is a Silicon Valley billionaire who is willing to use his fortune to construct the space elevator on the island nation of Kiribati in the Pacific. He understands that this funding will be inadequate for a fully functional system, but hopes to encourage other like-minded individuals, corporations and governments to invest.

As construction begins, we learn that a breakthrough has allowed the construction of miles-long carbon nanotube threads. The threads are loaded onto individual reels, and astronauts must stitch the thread ends together in space as the reels unwind to create one long elevator. The engineers on the ground will protect the completed elevator from collisions with orbital debris by instituting harmonic waves to divert it at the projected points of impact. Precise calculations and tracking are required so that the waves travelling up and down the elevator cause it to move aside at just the right moment.

We also learn that there are multiple uses planned for the ‘Pillar.’ One is to have interim stations at five hundred miles and at twelve thousand miles for tourists. The primary advertised use is to provide inexpensive access to space once the initial sunk costs are written off. A third objective, which is kept secret, is to institute solar arrays which will beam power to the five hundred mile station, and then relay the electricity to the ground via cables. The power from space will be taxed to pay back the initial investors, as well as gather political support at the endpoints of the power distribution cables. They will use power cable distribution to avoid the political, social and engineering issues which would result from microwaving power through the atmosphere to the surface.

Much of the novel then consists of details of the pillar construction using spinners and ‘stitchers’ to widen the initial elevator and the various struggles that ensue for the astronauts. When it is revealed that the elevator will bring inexpensive power to the world, we are also treated to attempts by unknown assailants who wish to destroy this ‘disruptive technology.’

Pillar to the Sky states that it is a “NASA-inspired work of fiction” and “a compelling vision of a bold new future.” It harkens back to the early days of America’s “can do” space activities, and provides action resulting in heroism, bold achievements, and even tragedy. I found myself annoyed at the short sightedness of some of the individuals arguing against the construction, and felt that it was all too plausible that others would try to stop it. There is much here that demonstrates how private companies and individuals can impact our progress in space. However, I found it a bit fantastic that the cables to distribute power were proposed as long wires from space going directly to different continents, as there was no discussion of collision avoidance of these cables with space debris and airplanes. Also, although there was much action centered around the dangers of an astronaut being sliced in half by carbon nanotubes, there was no discussion of the danger of a falling elevator if it was cut. I could only assume that the author put the base of the elevator on an island in the middle of the Pacific to address this issue.

The novel does a realistic job of projecting how a space elevator might actually be constructed, along with the political ramifications that could result, if the breakthroughs in the novel occur at some time in the future. It also incorporates a number of good action sequences. Overall, it evokes an inspirational message in line with the NSS vision about how private individuals can help build a better future on Earth utilizing space technology.