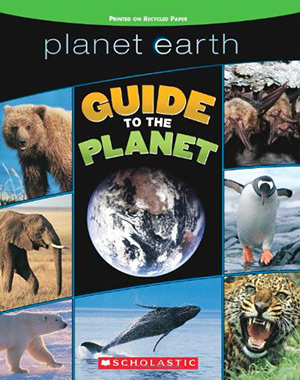 Planet Earth: Guide to the Planet, by Steve Murrie and Matthew Murrie, is an excellent resource for young readers who are in the 9 to 12 age range to learn about the natural diversity on Earth. The authors have a style that makes learning fun and easy. The pictures are colorful and enhance the subject of each chapter.

Why review a book devoted to science?  We need to entice the young readers to learn the various sciences in order to propel them towards space endeavors as they get into secondary school and colleges.

The book is only 80 pages, divided into eleven chapters, but each section reveals interesting facts about the geology, non-human inhabitants, and environmental issues of that particular chapter. In order to enhance the learning process, each section contains colorful photographs, a section providing additional facts, “Did you know” items, quizzes, and more food for thought. Some of the quizzes are specific to the chapter while others make the reader think about what he or she has read before answering. The answers are found upside down under the questions.

In the Introduction, the authors’ expressed hope was that the reader would become “more in touch with this extraordinary world” by taking a journey of discovery through the pages of the book. The book does indeed take the reader on a journey — from the waterfalls of South America to the ice caps of Antarctica, from the highest mountains to the deep ocean — all the while enlightening the reader as to how fragile these ecosystems are.

In the chapter entitled Whole Earth, the authors briefly and simplistically described the current theory that the Moon was formed as a result of a collision with Earth by a planet that had a liquid iron core. The added iron resulted in a magnetic field that protects Earth from harmful radiation. The “Planet Quiz” then asks the reader to determine if the North and South poles are in the Arctic or Antarctic. As noted, this is a book for elementary school readers, so there is no further discussion of magnetism and the poles. Instead, the chapter then goes on to talk about the animals of Earth and how they cooperate for food gathering, survival, and grooming.

In the chapter entitled Frozen Poles, there is a discussion of how animals adapt to their environment (polar bears need to hibernate in winter) as well as their mating rituals. Animals and plants have adapted to their environment also by changing their appearance. Examples abound in the chapter: the arctic terns travel more than 9,000 miles a year between Antarctica and the Arctic to mate, while Eider ducks use the feathers that they shed to build their nests. This is an interesting chapter in that it presages our future space farers and how they will have to adapt to living in space.

The chapters entitled Forests, Great Plains, Deserts, and Mountain Heights contain many interesting facts that introduce the reader to the diversity found among Earth’s creatures as well as the planet’s diverse geology. For example, the world’s oldest tree, called Methuselah, is 4,700 years old; plains are found on all the continents except Antarctica; camels close their ears and nostrils to keep out sand during sand storms; and the Himalayas are so high and extend so far that they actually control the temperatures on Earth. By describing how the animals in these habitats have managed to survive, the authors have prepared the readers for the potential of humans adapting to harsh environments found on other worlds in the future. By defining “deserts” as an “abandoned place,” the authors are alerting the readers to the fact that the encroaching deserts are a serious environmental issue in many parts of the world.

The chapter called Caves should be of special interest to people thinking about living underground on the Moon and Mars. Some of Earth’s cave dwellers may adapt well to those off-world environments, and studying Earth’s cave dwellers, such as glow worms described in this book, may also help us identify and protect alien organisms.

The Freshwater, Rainforests, and Open Oceans chapters provide vivid descriptions of these habitats and the unique animals that occupy them. Of these final chapters, the Open Oceans chapter may be of the greatest interest to space enthusiasts because of the possibility of finding life in the alien oceans of Jupiter’s moon, Europa, and Saturn’s moon, Titan. Earth’s oceans include creatures that have had to adapt to a lack of sunlight, extreme cold, thermal vents and high pressures.

Throughout the book, young readers are alerted to ways to help conserve and sustain the treasures of the Earth.  This is a book geared to introducing Earth as a scientific laboratory to young readers. There is no mention of using space resources to assist in conservation efforts, although space enthusiast know that is another powerful way to meet the goal of preserving our home world. Still, the first step in preservation is appreciation, and this book offers a concise, easily understandable walk through the diversity of Earth. I highly recommend this book.