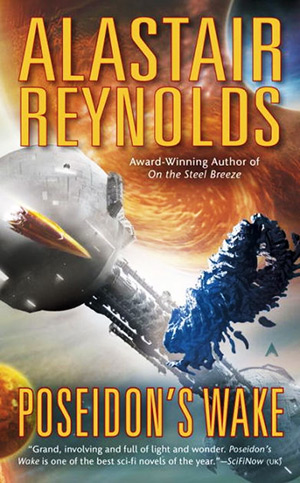 This novel forms the conclusion to Reynolds’ Poseidon’s Children trilogy, but may be read as a standalone story. It begins in the far future as the people of the planet Crucible intercept a 2-word message from deep space meant for one of their inhabitants: “Send Ndege.” Ndege is a person who is a pariah ever since she accidentally triggered an alien artifact called the Mandala. The Mandala destroyed the colony ship from Earth that was still in orbit and which contained thousands who had not yet landed. Ngede is now old and confined to her house, so she cannot go on any expedition. There is speculation that the signal could be from her mother who vanished during a space expedition long ago. Goma, Ngede’s daughter, insists that she go instead to find her grandmother. The Tantors, who are genetically enhanced intelligent elephants, are regressing. Goma hopes to find not only her grandmother, but also the originally enhanced Tantor who was lost on that expedition. Goma arranges a starship to fly to the star system where the message originated. Most of the crew go into “skipover” hibernation since the sub-light trip will take over 100 years.

The novel then shifts to Kanu, Earth’s ambassador to the robots of Mars. Mars has been taken over by intelligent robots, which allow no humans to visit except to the embassy on Olympus Mons. When human terrorists who wish to take back the planet explode a shuttlecraft, Kanu is killed. But the robots resurrect him along with an AI rider in his brain named Swift. The robots have also intercepted the cryptic message to send Ndege and wish to investigate. Apparently an artificial intelligence predecessor to the robots was also on that lost expedition.

But there is one problem with any interstellar flight from Earth, Mars or Crucible. The enigmatic and seemingly all-powerful “Watchkeepers” destroy most spaceships. Little is known about them; they permeate each solar system as large metallic objects the size of small moons. For some reason, though, they allowed that original lost expedition to proceed and even seemed to lead it on its way. Kanu quickly arranges a shuttle flight to the oceans of Europa where an interstellar spaceship is hidden. He hopes to emerge with the ship from the ocean’s depths and leave for the message’s star system before anyone from Earth or a Watchkeeper can stop him.

The main problem I had with the story was the huge number of characters and multiple mysteries to keep track of. There is a saboteur on Goma’s ship. The Mandala and the Watchkeepers remain unexplained until very late in the book. Swift, the AI in Kanu’s head, has an unknown agenda. And how the Tantors fit in is also left unaddressed for a long time. Approximately 300 pages into the story, a character says, “We’ve arrived in the middle of a situation we don’t understand with next to no prior information.” Yes, this is exactly how I felt at this point.

The good news, however, is that the mysteries start falling into place at this point. Past the midpoint of the novel, the surprises and action ramp up as Goma’s and Kanu’s ships arrive after their long voyages. There are strange alien structures that need to be explored among the many planets in the new solar system. The goals of the Watchkeepers are explained as well as the true purpose of the Mandala. And there is a lot of action as the objectives of the many characters finally emerge, including those of the lost expedition. And, there is a surprise twist of a new group in orbit around one planet.

Overall, the novel is a mixed bag of long exposition, side stories that seem to go nowhere, and then good space action. If you are a fan of Reynolds’ stories, have followed his series, and are willing to wait for the mysteries to unfold, this could be for you. NSS members may find some of the sequences entertaining, such as the story’s depiction of the interplanetary and interstellar flights and the descriptions of the alien planets. There is also action around a rescue mission of stranded folks, including Tantors, whose spacesuits are running out of oxygen. Perhaps the most important point to the tale is that all the characters have an unquenchable urge to explore space in spite of the hazards in their way.