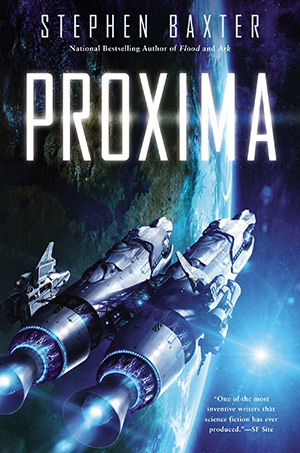 Stephen Baxter (author of Xeelee series, Flood, Ark) has returned with a monumental SF novel in Proxima. Weighing in at 455 pages, Proxima is long enough to contain a lot. Baxter tells the tale of the settlement of Proxima Centura via a long list of characters, including both humans and AIs. The interactions between the humans and the AIs are done especially well, and the reader feels as much sympathy for the machines by the end of the story as for the humans.

Proxima’s planets, especially Per Arudua, the target of colonization, are marvels of SF world building, fresh and original. The medium-term extrapolation of a solar system split between a US-led UN and a Chinese Empire feels real, as does their differing technology paths and their ruthless struggle to both settle Per Arudua and control the home solar system. The technology extrapolation, with one exception I’ll describe below, is excellent, and includes a very nice envisioning of Robert Forward’s Starwisp interstellar solar sail.

This is not a tale of characterization, as we don’t have that much time to get to know each of the many people and AIs that dance across the stage. With a survival percentage similar to Jamestown and Plymouth Rock, with a side of Roanoke and the Donner Party thrown in, most of the people you meet are, shall we say, “short timers.” The main thing that many may find off-putting is a British tendency toward the macabre. Baxter tells a brutal “Botany Bay” style tale of the colonization of Per Arudua, replete with the grotesque.

The other flaw in what is otherwise a very strong hard SF book is the reliance on a powerful alien technology, the “kernels” which enable speed of light starships and even speed of light teleport gates. There is nothing wrong with Baxter’s treatment of this topic, which could be viewed as very advanced hard SF, but the presence of this hyper-advanced technology becomes the axle around which the plot revolves and thus detracts from the tale of settlement and exploration.

A final problem is that Proxima ends rather like the Stargate TV series, with some of the main (surviving) characters popping through a teleport gate to parts unknown, and other parties setting out on a major voyage in a kernel drive starship. Clearly a sequel is in the offing. This complaint aside, Baxter does play fairer than many authors, and he lays down the answer, albeit in a subtle fashion, to a central mystery in the book: the identity of Yuri Eden, one of the more important characters.

I read Proxima in a British edition I bought via Amazon. I expect that this book will be a contender for a Hugo. Recommended for fans of Baxter and British SF in general, but be warned that this is a dark sense-of-wonder novel.