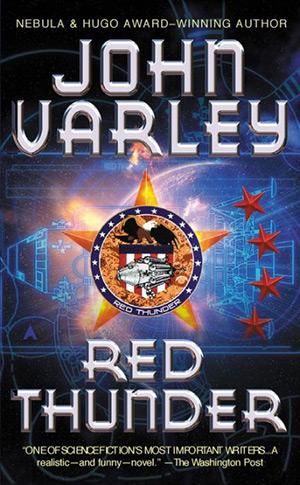 In Red Thunder, Hugo and Nebula award-winning author John Varley has written a novel in the vein of Robert A. Heinlein’s classic juvenile novels such as Rocket Ship Galileo, Space Cadet, and Have Spacesuit, Will Travel, but updated to the present. As in the Heinlein novels, ordinary young people are thrust into a decidedly extraordinary situation.

The story takes place in a near future in which the Lockheed Martin VentureStar successor to the space shuttle was not cancelled and VentureStars lift from Cape Kennedy on a weekly basis, headed for the space station. Most things are pretty much as they are in our world in the first decade of the 21st century. One visible difference is the presence of automated highways that take control of your car and whisk you from point A to point B at high speed in bumper-to-bumper traffic. The point of view character is Manny Garcia, a 19 year old Cuban-American who recently graduated from the fictional Gus Grissom High School in Daytona Beach, Florida. He and his mother run the iconic Blast-Off Motel, a relic of sixties kitsch left over from the early days of America’s space program.

The story gets rolling when Manny, his African-American friend Dak, and their girlfriends Kelly and Alicia, are joyriding on the beach in Dak’s highly customized pickup, Blue Thunder. They narrowly avoid running over a passed-out drunk lying in the sand. The drunk turns out to be a Cajun ex-astronaut, Travis Broussard, who had been the most highly skilled pilot in the corps until his drinking problem booted him out of NASA. After the kids take Travis home, things get interesting.

Travis lives with his genius cousin Jubal, who was nearly killed by his deranged and abusive father. Jubal suffered serious brain damage, which makes him appear to be retarded, but his streak of genius survives. He discovers a way of extracting unlimited energy from another dimension of space-time, which holds the promise of opening up the solar system.

Jubal’s discovery comes none too soon, as both Chinese and American missions are headed to Mars, with the Chinese poised to land first. The American ship is powered by Franklin Chang-Diaz’ VASIMR drive and Jubal has concluded that it will likely fail on the long trip, killing all the astronauts on board, including Travis’s ex-wife, Holly.

Jubal, Travis, and the four young friends believe that Americans should be the first to land on Mars, so the only sensible course is to build a Mars ship using Jubal’s squeezer drive to beat the Chinese to Mars and rescue the Americans if their ship fails. That being the case, four teenagers, a recently dried out alcoholic, and a badly damaged genius proceed to build Red Thunder, a squeezer-powered ship that can accelerate continuously at 1 g halfway to Mars, then flip over and decelerate to rendezvous with the Red Planet, all in the space of three days.

As you might expect, there are a number of challenges that work to prevent the team from ever lifting off in Red Thunder, let alone successfully beating the Chinese to Mars or rescuing imperiled NASA astronauts. Manny’s mother is none too keen on having her son fly off to Mars with a recovering alcoholic. Kelly’s father would go ballistic if he were to find out his daughter was planning to really go ballistic. The FBI and the U.S. Coast Guard also supplied serious obstacles. The team of adventurers, with the help of various Broussards and other family members, works together to face the challenges as they arise.

I enjoyed this story a lot. It brought back memories of the Heinlein stories that fired my interest in space travel a half century ago. The technical details are accurate. Orbital mechanics is correctly covered as are life support, propulsion, and the problems, both physical and psychological, that are likely to arise on a conventional three month trip to Mars, such as those undertaken by the Chinese and NASA astronauts. Jubal’s squeezer drive is, of course, as fanciful as H.G. Wells’ cavorite anti-gravity propulsion was a century ago. The book shows China to be NASA’s likeliest rival in manned space travel to the Moon and beyond, and also shows the US government’s cool attitude toward private space activity. Perhaps our current reality, in which VentureStar never made it off the ground, is better after all. Private space ventures are sprouting up all over, and there is the potential at least that China may be a valuable partner in space rather than a rival. It would indeed be wonderful if the first human being to set foot on Mars could truthfully say, “We come in peace for all mankind.”