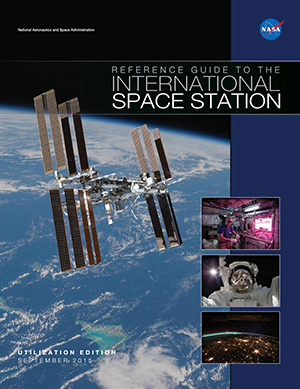 Complete online copy of this book

The book’s back cover states that the book “is designed to provide a broad overview of the International Space Station‘s complex configuration, design, and component systems. As well, the sophisticated procedures required in the Station’s construction and operation are presented.” This review will judge the book on this basis.

The book is organized into the following chapters:

The book’s first chapter, “Assembly Stages,” is a graphic section that identifies the modules, supporting components, their sequence in the assembly of ISS, and their location within the overall structure. Each step in the assembly sequence is illustrated using a computer drawing and a photo for those structures already on orbit. The computer drawings are those previously on the NASA ISS web site. While I could not locate these original illustrations, the illustrations for future assembly missions can be found at
http://www.nasa.gov/mission_pages/station/structure/ISS_Assembly_Art.html.

The Elements chapter provides a very brief one-page overview of each module and its functionality. Elements for which these one-page descriptions are provided are:

For each of these components, basic size and mass measurements and a short description of the component’s function is provided. Also included are one-page descriptions of the Internal Research Accommodations, consisting of the Standard Payload Racks, the Active Rack Isolation System, and External Research Accommodations, which are locations on the exterior of ISS where experiments requiring exposure to the space environment can be mounted.

The chapter “Transportation and Logistics” provides a one-page overview of the various launch vehicles that have been and will be used to support the ISS program. This includes the Russian Soyuz and Proton launch vehicles, Japan’s H-II, Europe’s Ariane V, and the U.S.’s space shuttle. Additional one-page descriptions are provided for the:

The chapter on Systems consists primarily of a sequence of module outlines that illustrates the location of various system elements in each module. The system components so identified fall within the categories:

Unfortunately most of the associated photos used to show these components and sections of the modules are the size of postage stamps and little, if any, detail is discernible.

Extravehicular Activity (EVA) is critical to the construction and maintenance of the International Space Station,  and a very brief overview of this aspect of station operations is provided. In terms of station ingress and egress, an overview of the Quest  airlock,  the Russian Docking Compartment, and Pirs airlock is provided along with the associated spacesuits. When using the U.S. Quest  airlock to exit and reenter the station, the astronauts wear the U.S.’s extravehicular mobility unit. When using the Russian Pirs airlock, astronauts use the Russian Orlan spacesuit.

The “Missions” chapter is essentially a table listing the shuttle, Soyuz, and Progress flights to ISS by mission name, date, and crews.

The most entertaining chapter of the book is “Interesting Facts,” which could best be described as space station trivia. For example:

The book’s Appendix consists of an acronym list, a must for the acronym-rich ISS program, and an all too-short list of definitions that is sorely lacking in depth.

The chapter identified as “Contacts” in the book’s table of contents is just a list of the space agencies involved in the ISS program. In  my opinion, it does not deserve chapter status.

With respect to the book’s stated goal of providing a broad overview of the International Space Station, I believe that this book achieves its stated purpose. It provides a high level overview of the incredibly complex International Space Station program without drowning the reader in an ocean of facts. While I would not recommend this book to a serious student seeking in-depth knowledge of the ISS program and systems, it does do a good job of providing a quick overview of this program. The organization of the book is straightforward. While the book does lack an index, the book’s style of presentation makes such an index unnecessary.

My primary disappointment with the book was the small size of many of the photographs. While being profusely illustrated, many of the images are quite small. For older eyes, some of the text may be difficult to read, especially some which is overlaid on background imagery.

In closing, I would recommend this book to anyone who wants to quickly acquire a good, high level understanding of the International Space Station program.