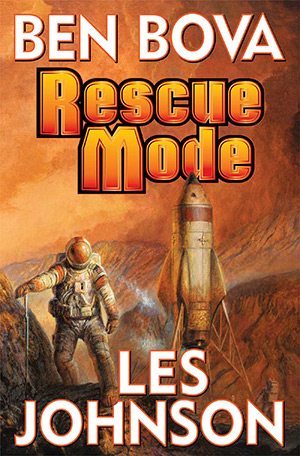 Rescue Mode by Ben Bova and Les Johnson is a realistic story of a first mission to Mars.

The focus of this book is an exploration, not of Mars, but of the physical, psychological, and political issues involved with a human mission to the red planet.

The book jacket and promotional description says, “The first human mission to Mars meets with disaster when a meteoroid strikes the spacecraft. The ship is too far from Earth to simply turn around and return home. The eight-person crew must ride their crippled ship to Mars while they desperately struggle to survive.”

The first third of the book is all set up for this disaster: the ship systems (especially life support and propulsion), mission architecture (what they are carrying and what has been placed ahead on Mars), and properties of space (including the meteoroid and radiation) are all described via news reports from interviews with the crew and flight director. The pending political disaster is foreshadowed by scenes from the point of view of the president of the United States who supports the program, and a senator who opposes it. The psychological problems are exposed through scenes from the point of view of at least half of the eight crewmembers.

When the meteoroid finally strikes, the weaknesses in all of the physical, psychological, and political support systems are exposed and threaten the survival not only of the crew, but the entire space program.

Space enthusiast will appreciate the technical accuracy of Rescue Mode which reflects the engineering background of author Les Johnson, a rocket scientist based in Huntsville, Alabama, as well as the long familiarity of author Ben Bova with all things space-related. They chose a modified “Mars Direct” plan where supplies and a nuclear generator are sent to Mars years ahead of the crew. The crew size of eight is larger than the current NASA plan for six or Robert Zubrin’s plan for four. But this larger crew size is based on the availability of a new heavy lift booster, and also assumes a short (30-day) surface mission with a total roundtrip of about 650 days (versus the more familiar NASA reference mission of about 900 days that includes a 500-day stay on Mars). Details of ship design and function are well founded and explained to those readers who might be unfamiliar with such things.

Though I appreciated the sound engineering aspects of the book, the story itself suffered from too many “talking heads” telling me how things work versus showing me how they work by having them fail and the crew deal with the physical and emotional impacts. Short scene changes interrupted the flow of the story, and emotional involvement was made difficult by constant point of view changes from each of about a dozen characters. But though the book has a slow start because of these issues, after the disaster strikes, the pace picks up, and the story proceeds logically, given the choices available to the crew and their supporters.

Rescue Mode is a good book to share with readers unfamiliar with space missions to help them understand the challenges involved and appreciate what might go wrong on a first mission to Mars. The book does not contain any violence, sex, drug use, or foul language: just some adult situations, so can be shared with younger readers, though they might not have the patience to get through the set up of the “initial conditions.” Space enthusiasts who want to read every book about Mars missions will want to add this one to their collection.