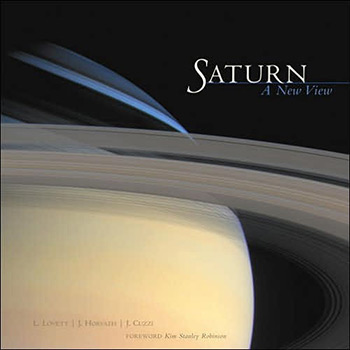 The planet Saturn has conjured up visions of a mysterious and awesome celestial body since Galileo discovered its rings using his newly-built telescope in the 1600s. Later that century, Christiaan Huygens further enhanced our perception of the planet with his improved telescope, expanding humanity’s knowledge of the Saturnian family with the discovery of Titan, its largest moon. Within several years, these discoveries were followed by Jean-Dominique Cassini’s identification of four more moons and the division in the rings that was named after him.

It is therefore fitting that a craft named Cassini and a probe named Huygens should further explore Saturn and its forty moons. The Cassini spacecraft, as large as a large van and weighing 12,800 pounds, is the culmination of an international effort on the part of the United States and sixteen of its partners in the European Space Agency, parent of the Huygens probe.

Saturn: A New View, by Laura Lovett (a book designer), Joan Horvath (a former NASA engineer) and Jeff Cuzzi (a scientist on the Cassini-Huygens mission), is an incredible volume of history, facts, and 150 awe-inspiring photographs of the planet and its moons, taken from downlinks from Cassini.

The spacecraft launched on October 15, 1997 and reached Saturn on July 1, 2004. The spacecraft had a flaw in its ability to communicate with Earth such that Huygens needed Cassini to serve as a relay station to send signals to Earth. A change was made in the trajectory, and software changes corrected the problem and saved the mission. The spacecraft took a circuitous path to Saturn in an effort to conserve fuel. Without gravity assists from Venus (twice), Earth, and Jupiter, it would have been necessary to load the craft with so much fuel that it would have remained Earthbound.

In the first year of its four-year investigation of the system, Cassini not only surpassed its primary mission, but returned more than 35,000 spectacular images of the planet and its moons. The images, many taken from the unlit side of the planet and in both natural and false color, are so detailed that the reader becomes a passenger on the craft, viewing a distant part of our solar system from their own personal spacecraft. In a way, it is like the awe-struck astronauts viewing their home planet from the vantage point of the International Space Station. When the reader first opens the book, the first view of Saturn that is seen is surreal — a beige ball suspended in space with the striated rings providing an other-worldly image.

This large 192-page book is more than a coffee-table acquisition. The reader becomes captivated from the first photograph. It is hard to put the book down, and will be especially so for people who enthusiastically study and support space exploration. The authors, through articles, have each taken an aspect of the journey to write about, enhancing their words with unprecedented photographs gleaned from data archived at the Jet Propulsion Laboratory in Pasadena, CA.

The book begins with Joan Horvath’s history of discoveries of Saturn from Galileo’s first look at the rings in 1609 through early spacecraft flybys in the 1960s and 1970s. The article then goes on to discuss the roller-coaster efforts to get the Cassini spacecraft built and launched, including highlighting the scientists and engineers who gave life to this wonderful craft and the trials and tribulations necessary to build, fund, and finally launch a craft from Earth to the jewel so many millions of miles away.

Jeff Cuzzi then goes on to examine the planet’s rings, also using photographs to punctuate his story. The reader is able to get a deeper understanding of this extraordinary ring system from the bird’s eye vantage point of the little spacecraft. One picture, completely covering two pages, shows so much detail of all the rings that the reader forgets that the rings are made up of ice and dust.

Cuzzi continues with a narrative of the planet’s moons, from mighty Titan to little Pan. Huygens was the first craft to land on the moon of another planet. Titan, at 5,150 kilometers, is larger than our moon and is the only one in the solar system with an atmosphere. When Huygens landed on Titan, the little probe found topography similar to that on Earth and evidence of nitrogen, one of the building blocks of life. Planetary scientists are curious to find out if life could have formed on the moon in the past or form there in the future. A picture of Enceladus, taken from a distance of 218,000 kilometers (135,000 mi.), had lines called “tiger stripes.” Cassini found the stripes were warmer and might contain liquid water ice, another intriguing possibly for life in our solar system. Many of the pictures contain numerous moons, allowing the reader to get a better understanding of the size and relationship of the moons to each other and with the planet that holds them captive.

The images and data taken by Cassini and its probe will occupy scientists for many years. These findings could one day be translated into manned missions to the moons, many of which could provide the natural materials needed to assist in long-duration missions.

I recommend Saturn: A New View enthusiastically. Not only did I learn interesting facts about the discoveries that enhanced my understanding of Saturn, but I was mesmerized by the larger-than-life photographs of the family photo album of this extraordinary planetary system.