Book Review: Scatter, Adapt, and Remember: How Humans Will Survive a Mass Extinction 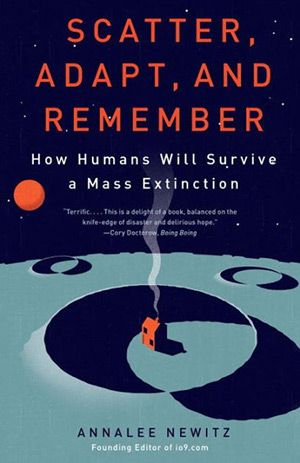 The single most durable and imperative motive for space settlement surely lies in mere species survival. Biologists tell us that each species, including our own, has a finite life. Scatter, Adapt, and Remember does an excellent job of describing the forces that limit a species’ lifetime and the survival strategies that have the greatest potential for the human race. Newitz is concerned not with mere individual “survivalism,” but with the steps we can collectively take to ensure our species has a long future.

Newitz starts Part I with five chapters of “A History of Mass Extinctions,” touring geological history to give us glimpses of the “Oxygen Apocalypse,” the “Icehouse World,” the assault of the “Megavolcanoes,” and of course, a section on the meteorite that killed the dinosaurs. Although this sounds like a Saturday evening on the Discovery Channel, each of these events resulted in massive global diebacks where a significant percentage of all existing species died out. Newitz explores how the “scatter” strategy combined with the “adapt” strategy allows some species to survive. Simply put, any species that can consume a wide variety of foods and thrive in a broad range of environments has a distinct advantage. Hopefully, the reader will emerge shaken but with a deeper understanding of the long-term instability of the Earth, and the enormous dangers that might lie in our future.

Part II, “We Almost Didn’t Make It,” explores the early history of the human species in “the African bottleneck.” It now appears we are all descended from a relatively small number of individuals from an isolated area, and over time, we’ve survived threats to our species, big and small. It is possible that human numbers dropped as low as 10,000 individuals before rebounding to our current billions. Newitz surveys the fate of the Neanderthals, the impact of the Black Plague, and scourge of the Great Irish Famine to consider how each of these events might affect the survival of the human species in the future.

In “Lessons from Survivors” (Part III), Newitz focuses on specific examples of species and how they survived, starting with how humans have used all three strategies: scatter, adapt, and remember. Non-human survivors include blue-green algae and gray whales. Each gets a turn in the spotlight, followed by a general discussion of motivations for survival, informed in part by Newitz’s reading of the science fiction of Octavia Butler.

Part IV, “How to Build a Death-Proof City,” has considerable relevance to space settlement, especially the chapters on “Cities that Hide” and “Every Surface a Farm.” The problems of living underground are closely related to the human factors of free space settlements and directly apply to sub-surface lunar and Martian colonies. The lessons learned from vertical and urban farms will serve us well as we move into an era of self-sufficient space settlements.

The book concludes with Part V, “The Million Year View.” Here Newitz considers the promethean endeavors of “Terraforming Earth,” which puts an exclamation point under how unstable and potentially unsafe the Earth is as a long-term abode for humanity. Many of the geo-engineering projects she considers are based in space. “Not in Our Planetary Backyard” covers the defense of the Earth against incoming asteroids and comets, territory that will be familiar to most NSS members. The original NEOWISE mission to identify potentially dangerous NEO asteroids, recently re-activated by NASA, is just one of several projects Newitz investigates.

A longer-term view is taken in “Take a Ride on the Space Elevator,” in which Newitz postulates that the real “space rush” will occur when we can buy a ticket on an elevator to orbit. Newitz is well aware of SpaceX and other entrepreneurial efforts, but perhaps correctly thinks that they are only steps on a long path toward cheap access to space. “Your Body is Optional” considers the possible future of human evolution in space, and it appears that Newitz believes that the technology that will make the long-term mass settlement of space possible is as much biological as mechanical.

At this point an odd note enters the book when one Daisy Ginsberg, a London designer, is trotted out to declaim how technology may go too far, saying “We’re going to poison the Earth” and “…we’re going to become the Morlocks.” Newitz recovers from this atypical diversion and concludes with an examination of the science fiction of Paul McAuley (The Quiet War) and Kim Stanley Robinson (2310, Red Mars, Green Mars, Blue Mars), two writers who have explored in detail how biotechnology might support the settlement of space.

The final chapter, “On Titan’s Beach,” takes a longer-term look at humanity’s future in the Milky Way, interviewing JPL’s Randii Wessan and former astronaut Mae Jemison, now director of the 100 Year Starship project. Newitz concludes, “Things are going to get weird. There may be horrific disaster, and many lives will be lost. But don’t worry. As long as we keep exploring, humanity is going to survive.” This is certainly necessary, but as the entire book demonstrates, it is far from sufficient. Mere exploration will not build a hopeful future in space. For that, we need settlement—we need to “scatter, adapt, and remember.”

Dale Skran is a technology entrepreneur and a long-time space activist currently serving as the deputy chair of the NSS policy committee, having previously been on the NSS board of directors and editor of the Space Activist’s Handbook.