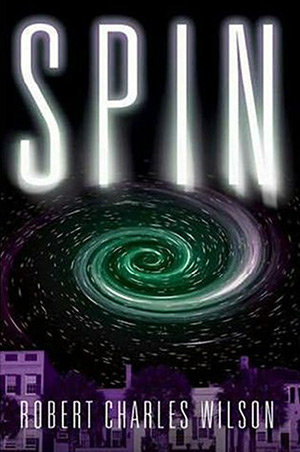 Spin by Robert Charles Wilson is the Hugo-award winning story of three young friends who search for understanding and a viable future for themselves and a human race that must settle space or face extinction.

In the Universe as we know it today, the Sun will be converting hydrogen to helium in its core for the next few billion years. As the hydrogen is depleted and the Sun’s mass decreases, the Sun will expand and the gravitational force holding the planets in orbit will weaken. So the Earth will move farther from the Sun, but not, scientists predict, far enough to avoid being toasted by the Sun’s increase in size. The oceans will boil, and Earth will be about as habitable as Mercury (which will be vaporized – the jury is still out on Venus). Mars, however, should survive, and assuming our efforts to settle space are successful, will replace Earth as the habitat of the human race for the next few billion years. When the Sun finally runs out of nuclear fuel, it will be up to our descendents to figure out how to migrate to a younger star with Earth-like planets, or build artificial habitats to sustain us using only the feeble glow of a white dwarf.

In Spin, author Robert Charles Wilson has found a clever way to accelerate the Sun’s evolution so that it occurs in a human lifetime: the Earth is engulfed in a shield that blocks out the stars and Moon and changes the relative passage of time. By sending probes out through the shield, scientists learn that for each day that passes on Earth, about 30 million years pass outside. The shield protects the Earth from being toasted as the Sun ages and expands, but it seems that life on Earth is doomed to extinction when the Sun dies. Thus, through the “what if” scenario of an “offstage” alien intervention, the author forces the inhabitants of this fictional future to solve the space settlement problem or face extinction. The story is set in the near future, showing that the tools for engaging this solution are nearly in hand.

Tyler Dupree and his best friends, twins Jason and Diane Lawton realize they have about 30 years to solve the human survival problem or make peace with extinction. Diane turns to religion for answers, Tyler focuses on the present and becomes a doctor, and Jason attacks the problem with his scientific genius. Recognizing that a warmed-up Mars could sustain life, Jason sends a series of rockets carrying microbes to “terraform” it. After a few years Earth-time, and hundreds of millions of years Mars-time, the first human colonists are sent to Mars. Jason hopes that the Martians, who will have millions of years to evolve and gain knowledge while only a few years pass on Earth, will find a way to save the human race. When a Martian ambassador finally arrives on Earth, the solution he offers is controversial. Will following his recommendation doom the Earth or save it?

The story is told from the point of view of Tyler, with flashbacks to his past alternating with the present-time until the two converge at the very end of the book. The author used this story-telling device in a masterful way to keep the story moving and the sense of wonder intact throughout the book. The interaction of politics, religion, human frailty, and the aerospace industry intertwine for a complex and satisfyingly realistic situation as seen through the eyes of a sympathetic character. Space advocates, especially those who favor the settlement of Mars, should especially enjoy reading how the terraforming transpires and what it accomplishes.

I thoroughly enjoyed Spin, and can see why it won the Hugo award for best book of the year. If you find yourself stuck at an airport like I did recently, this book will make the time fly even if your airline doesn’t! I highly  recommend it.