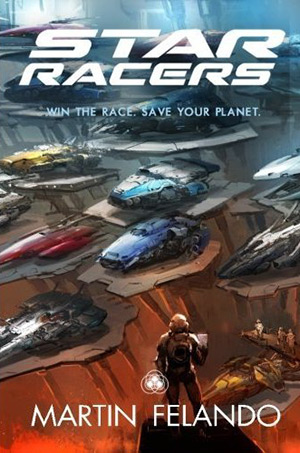 In the year 3834, Earth and Mars find themselves in deep trouble. Three powerful factions fight for control of the inner solar system. The Maelae, a thoroughly evil, lava-flinging race of mineral-based aliens, wish to ruthlessly subjugate the human race and reduce our planets to molten slag, as they have done to countless other worlds. THE, an authoritarian dictatorship controlling most of Earth and Mars, short-sightedly cooperates with the Maelae as long as the invaders limit their attacks to territory controlled by the third faction, rebels occupying the Free Zones.

Star Racers drops us into this richly imagined and portrayed universe at a pivotal point in time. The Maelae are poised to attack Nightona, the most powerful of the Free Zones, home to the famed ‘Museum of Engines.’ The only thing standing in the way of this catastrophic invasion is our hero, Rev Arden, a naive 20-year-old from Tennessee with a passion for racing.

Rev is a strong protagonist, filled with oceans of self-doubt, who needs to mature and gain experience quickly if he is going to survive. Younger readers should delight in his adventures, or those of the wildly imaginative side-kicks he picks up along the way. If you imagine a blend of Star Wars with The Fifth Element, you’ll come close to the lavish mix of characters and settings in Star Racers.

The characters in Star Racers inhabit a rich universe of ideas. We witness a positive future of mankind living and working in space, though our future history takes a serious wrong-turn at some later point with THE’s rise to authoritarian power. Space science details are well presented, within a far-future context that occasionally approaches fantasy but never quite goes too far. The story creatively includes several futuristic gadgets or products like ‘Idea Cards,’ which gets my vote as best new iPhone app of 2017. Other ideas don’t work as well or are downright silly, like armies of warrior dolls or all-important wrist-watches raining down from the skies.

This novel contains a unique piece of dazzling artwork at the start of each chapter, though most are rather cryptic and don’t add much to the overall story. Several do add depth, however, such as ones of Rev Arden, his love interest Sashi, or the evil Maelae. Given the fast pace of the plot, the intense battle scenes, and the universally appealing theme of futuristic racing, this reviewer wonders if the book would be more successful with even more artwork. A graphic novel or an animated television series might prove popular.

The greatest strength of this book is the colorful diversity of aliens. We’re talking Star Wars cantina scene, times ten. Though it gets a bit overwhelming, several of these aliens earn their own side-stories as we probe key moments shaping the lives of Rev’s racing adversaries. The numerous side-stories build empathy for the opposition while introducing some shreds of doubt about the outcome. Will Rev Arden succeed in his quest to win the big race, thereby preventing the Maelae from thoroughly slagging a four-planet coalition of Ajah, Ossi, Earth, and Mars? Or will one of his worthy competitors prevail? And if Rev does win, what will happen to the losers like the poor orphans of Adela, Betsy’s Lover, Scrap Meat, or Eyeball? Aliens have needs, too!

The greatest weakness of Star Racers is an interrupted plot timeline. Chapter one begins in the middle, as Rev waits on the starting line of a qualifying race. The author covers the first nine days of Rev Arden’s journey in a later flashback. Because we already know in chapter one that Rev and his love interest Sashi will escape Earth and live to race another day, this releases most of the dramatic tension during the lengthy flashback.

The author also leaves some plot threads dangling. For example, a reader may want to know more about Mr. Law and his army of evil robots.

In summary, the vivid, intense action scenes in Star Racers should appeal to most young adult readers while presenting them with a generally positive view of humanity’s future. This reviewer gives Star Racers four out of five molten planets, with a fifth planet held in reserve for a future version in graphic novel or cartoon format, told in a linear story arc.