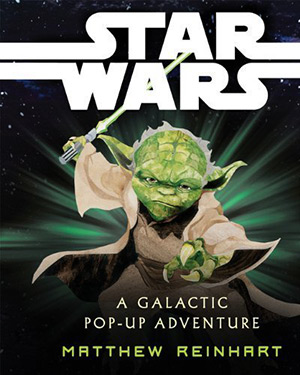 As a major Star Wars fan, I couldn’t resist the opportunity to review Star Wars: A Galactic Pop-Up Adventure. Not only did I want to see what creative content literally would “pop out” at me, as a writer, I also was curious to learn by example how to organize a book like this. So my review includes an analysis of how this pop-up book is organized as well as what content is included.

The book has no “front matter” such as a title page or table of contents or even page numbers. The dedication and credit information is in tiny print on the back cover.

A primary pop-up is folded into the center of each of the five double-page spreads for a total of five primary pop-ups and ten pages. Each page has pocket “flaps” that open to the side or down with secondary pop-ups, often containing an internal tertiary pocket with another pop-up. The labels and description for the primary is on the actual page, and each secondary and tertiary pocket has a boldface label/title and description.

I was surprised at the complexity of the text. Long sentences with difficult names, terms, and words rank it at college reading level. For example, the passage below from the first page has a Flesch Kincaid Grade level of 13.32 (college freshmen):

“NABOO. A beautiful world of unspoiled natural wonders, Naboo lies near the Outer Rim Territories. Ruled by the young Queen Amidala and a Senator named Palpatine, its human colonists stood defiant against the Trade Federation, who unlawfully occupied the planet with legions of battle droids. Amidala escaped, disguised as the handmaiden Padme, and enlisted the aid of Boss Nass and his people, the aquatic Gungans, to overthrow the Trade Federation.”

Elementary-aged children should not be expect to actually read this book. Any hope of them understanding what they do read requires familiarity with the Star Wars movies The Phantom Menace (I), Attack of the Clones (II) and Revenge of the Sith (III).

The primary pop-up of the first spread consists of two pod racers. I honestly couldn’t tell what they were until I read the description. Page 1 has two pockets. The first is “A Long Time Ago…” that describes the setting of the first movie. Opening this pocket leads to a pop-up of Amidalia (and the text excerpted above). The second pocket is labeled Tatooine, the world the Jedi had fled to. The pop-up inside this pocket is Corsucant, the capital of the Republic.

On page 2, there’s a pocket with a pocket on top. The outer pocket is “Utapru” (place of Obi-Wan’s victory) and “Kashyyyk” (Wookie world). The small pocket opens to a pop-up of a storm trooper, with the title “Kamino,” home of the clone army. The larger pocket is “A Galaxy Far Far Away” and opens to five pop-up spacecraft and a description of the world Mustafarr, home of the Sith lord. So, the first spread theme is apparently places or settings.

The second spread’s topic is obviously monsters with the primary pop-up an Acklay, “a nocturnal nightmare beast of Vendrxa” and a smaller, Nexu, “a vicious fanged feline from Cholganna.” The significance of these creatures, and the secondary pop-ups in this spread, is apparently tied to the arena fight of Obi-Wan, Anakin Skywalker, and Amidala with various monsters. Kids are sure to find these monsters appropriately fierce, though I’d have liked the pop-ups to do more than just pop up. No wheels turn or tabs pull out to make them breathe fire or slash their tails.

The third, and central, spread is General Grievous, the supreme droid commander. The secondary pockets all contain various enemy fighters. Writers will recognize these as “bad guys” character profiles.

The fourth spread is a Jedi fighter ship used in the Clone Wars. The pockets include other gadgets and also R2D2 and C3PO. The theme seems to be weapons and tech.

The final spread is Darth Vader. This pop-up comes with a plastic light saber that changes color (pull the battery tab in the back). Other characters are in the pockets, including Yoda and the Emperor, and Jedi knights with more character profiles.

In summary, the focus of this kind of book is on setting (where and when), characters (good/bad plus sidekicks), and inventions (ships/robots/gadgets). All text must stand alone because the inner pockets may not be read in any kind of order. The story’s beginning is on the first page and the end is on the last page, but the middle is not necessarily in order.

This book is packed, literally, with names, terms, and answers to difficult Star Wars trivia questions, providing hours of fun discovering it all and putting it into the context of the movies. I’d recommend it for fans and collectors, but not necessarily as a gift for someone else’s child because of the reading level. Parents should note that some flaps are hard to open and reclose—leading to tearing even on the first try. Also, future engineers are sure to remove the plastic light saber to play with it.

Star Wars Pop-Up Adventure may inspire some unusual Halloween or convention costumes, and likely spark an interest in watching the movies over and over until all the little details of these strange and imaginative other worlds have been absorbed. So if you decide to get this book, if you don’t already have the movies, you’d best order them at the same time!