Book Review: The Callahan Kids: Tales of Life on Mars 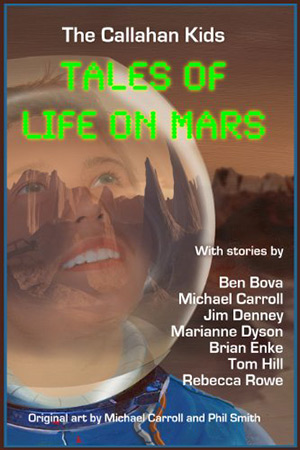 The ten short stories in this book are written by space engineers and technicians and depict a near-future Mars settlement in technically accurate detail. Each story is accompanied by one or more beautiful color illustrations that portray some aspect of the narrative. Many of the illustrations are good enough to be used as covers of science fiction novels, and the e-book versions look especially gorgeous on a color tablet. The stories all give a very good feeling of what it would be like to live on Mars through the eyes of three youngsters in the not too distant future.

The first story, “Meet the Martians” by Brian Enke is not a story per-se but an introduction to the setting and the main characters. The reader meets the first boy born on Mars, Mason, who is now fourteen Earth years old, his sister Mariah who is eleven, and Mason’s best friend Tregon who is also fourteen and a constant mischief maker. The Mom, Dad, cat, dog, parrot and Emma the humanoid robot are also introduced and each depicted by a portrait. The reader is also treated to a picture of “Bradbury Base” where all the colonists live and work.

What follows is a brief synopsis of each of the short stories:

1. Martian Mice by Marianne Dyson – Mariah is working on an experiment at the base’s lab to determine if mice live a different length of time on Mars. While there, her cat causes a life-threatening crisis. The story is an excellent example of dealing with fire and rescue in an enclosed habitat, and has a cute ending.

2. Ghost Story by Brian Enke – Tregon plays his home-made scary 3D Martian movie for this friends. When the kids’ parents go missing on a mission, a neighbor tells them a spooky “real ghost story” like Earthlings tell around campfires to distract them. The story makes you wonder how many Earthly traditions might get lost by distant colonies.

3. Yo-Yo: The Gift by Rebecca Rowe – A Chinese family from a nearby base visits, and they have a daughter Mariah’s age. Mariah presents her new friend with a yo-yo, which plays a surprising part when a thief steals an object from the base’s museum. This is a tightly woven who-done-it story with a satisfying conclusion.

4. Fear Above, Terror Below by Jim Denney – The kids see something mysterious flying about Mars, and no one believes them. What they discover astounds them even more than they could have imagined. It had me guessing, too!

5. Fire in the Sky by Tom Hill – People of the settlement crowd into the greenhouses to watch a spectacular meteor shower. When one hits the greenhouse structures, everyone must evacuate, but Mariah wants to save the strawberries from destruction. This is a straightforward action yarn about dealing with danger.

6. The Haunted Airlock by Michael Carroll – Strange things start happening around the base, and the kids think it might be due to a ghost. Footsteps outside seem to lead nowhere. Then they find an empty spacesuit with the name tag of P. Geist, and wonder if it means Poltergeist. Is Tregon up to one of his tricks again? Eventually they discover what is really going on.

7.  The Water Thief by Ben Bova – Water to the Callahan’s apartments is slowly disappearing and no leaks can be found, so the adults blame the teens. Of course, the kids take it upon themselves to engage in some risky endeavors to determine who is stealing the missing water. The story is a good illustration of thinking up alternative solutions to a problem.

8. Is Anyone Listening by Jim Denney – Mom is worried since Dad is out on a mission and has missed many checkpoint calls. Can the kids save the day using one of their science projects?

9. Dropping the Martian Ball by Marianne Dyson  – Mom, Dad and three kids head out to the Viking 1 lander to set it up as the first Martian historical site. On the way, the kids watch a Celebrity Teen show broadcast from Earth where the host states that people living on Mars is being faked. Thus, the kids decide to perform some science demonstrations to refute that claim. The story is a nice education of the physics of new environments.

Overall, I found these stories very entertaining and perfect for children of all ages. Along the way, kids will learn what it might be like to live on another world and what is needed to survive. And they’ll also find out how easy it is to get into trouble!