Book Review: The Case for Mars 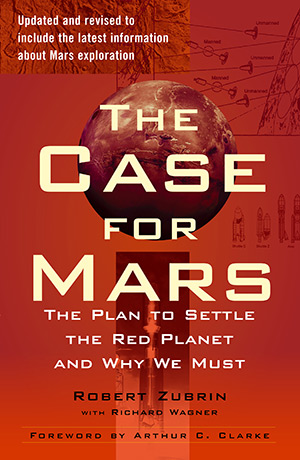 Even ten years after publication, Robert Zubrin’s The Case for Mars is not just a good read—it is informative, educational, and inspirational. Zubrin begins the preface of the book with the oft quoted “We choose to go to the Moon” speech of President John F. Kennedy at Rice University in 1962. Although Kennedy had about as much enthusiasm for space exploration as Richard Nixon, he was politically astute enough to understand the importance of setting an appropriate goal and time frame. He was also adept at creating a vision with his rhetoric. As Zubrin points out in later chapters, it is this lack of an exciting and relatively near term vision that is hindering in our current space exploration program.

However, Zubrin’s case for Mars is not nearly as strongly motivating to the public as Kennedy’s was for the Moon. The Cold War is history, and despite ominous overtones of a vigorous Chinese space program, there is no obvious “Red threat.” Zubrin emphasizes the desire to “reaffirm the pioneering character of our society.” He notes that Mars contains “all the resources needed to support life and the development of a technological civilization.” But are these compelling reasons for Congress to authorize a program to which some have attached a price tag of almost a half trillion dollars?

The rest of the preface sets the stage for what is to come. Zubrin illustrates the fallacy of what has been referred to derisively as the “Battlestar Galactica” approach to human exploration of Mars: a huge and costly expedition, mounted over decades, that must survive the rigors of a half-dozen administrations and the indecision of a Congress that often looses its way every two years. Zubrin addresses the cost and time factors as he moves the reader through a plan that might be accomplished for a tenth the previously estimated costs and within a decade.

The key to “Mars Direct” (as his plan has been labeled) is leveraging local resources that are available on Mars to avoid having to bring all of the required fuel—both those needed for return to Earth as well as those required to power a surface rover. The primary resource is the abundance of carbon dioxide which Zubrin believes can be effectively processed into methane for propellant. This is not as straight forward as it may sound as it would initially require bringing a substantial quantity of liquid hydrogen to the surface of Mars—from the Earth.

He presents a compelling case for the use of existing technology and some very pragmatic approaches to not just sending an expedition to Mars, but implementing an on-going exploration program that could function over a long period (perhaps indefinitely) with rotating crews to build an infrastructure for the first permanent human civilization off the Earth. By the time the reader is through the first chapter, few will be able to put the book aside as they ponder if this vision is too good to be true. Zubrin also covers the robotic exploration of Mars (as it stood when the book was published in 1996) and describes previous abortive plans to send a manned expedition to Mars.

Mars Direct is not a hypothetical illusion. Zubrin makes the reader think. He points out that the time spent on the Martian surface relative to the overall mission must be maximized. Why spend 640 days of mission time for a 30 day visit? One scenario of Mars Direct would have a 550 day stay time for a total mission duration of 910 days. As a result, trajectories and radiation exposure have been carefully evaluated.

Zubrin proposes that the effects of zero-G (weightlessness) be mitigated during transit by tethering the crew module with the spent final stage—rotating them to produce artificial gravity. Back-up and abort modes are assessed “outside the box,” carefully examining return options to exploit resources and flight profiles. Even the skills of the first crew of four (the suggested number) are evaluated with the positions of “flight engineer” and “field scientist” being the primary considerations.

But, Zubrin doesn’t end his Martian chronicle with just getting us to Mars. He examines surface transportation, electrical power, navigation, timekeeping, and communication requirements. He also speculates on terraforming the planet over several centuries.

In his epilogue, Zubrin laments the closing of the “frontier” mentality that inspired mankind and America in particular to move progressively forward. The obvious analogy is that the opening of a new frontier (Mars) will invigorate humanity. This was certainly a factor in the Apollo project where millions of viewers around the world participated vicariously via television; however, much of that excitement evaporated after the Apollo 11 mission. The philosophical aspects that motivate mankind to perceive the frontier as a path to the future are discussed briefly in closing.

In the 1997 paperback edition, Zubrin provides a “Special Addendum” to examine the meteorite, ALH 84001, that was found in Antarctica in 1984. The meteorite, which many authorities believe may have come from Mars, exhibits what some think may be microfossils of sub-bacteria-sized organisms. However, there are as many opponents as proponents of the claim, and there is yet no firm scientific proof that the microscopic structures are evidence of life on Mars.