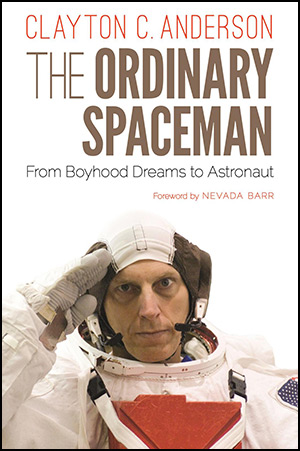 Clay Anderson claims he’s an ordinary human being who had an extraordinary career. His story bears that out only in part. What he had in extraordinary measure, it’s clear, is a dogged persistence and unwillingness to give up on his lifetime goal to fly in space.

Clay Anderson was seized by the space bug as he watched the Apollo missions on TV. Watching and listening to the Apollo 8 astronauts as they orbited the Moon on Christmas eve, 1968, was his “this is what I want to be when I grow up” moment. Unlike most others, he never let that dream die in the face of long odds. He made a plan and followed it, step by step, to two shuttle flights, six EVAs, and a five-month stay on ISS. In this autobiography, we follow that journey through its physical and emotional ups and downs, and get a detailed look at the astronaut selection and training process.

Anderson knew from the beginning that he’d need to work hard to make the cut. He started with a bachelor’s degree in physics (cum laude), and got his foot in the door as a summer intern at NASA’s Johnson Space Center. His work impressed his supervisors, and while working on a master’s degree in aerospace engineering, he was invited to come to work for NASA full-time. He demonstrated his commitment to his long-term plan by turning the offer down until he finished his master’s degree, knowing that the job might not be available later. It was, and he moved to Houston in 1983 to work on the early shuttle missions.

For the next 15 years, he applied for the astronaut corps and was rejected. All through those years, however, he was doing all the things he could to make himself more personally capable and appealing to the selection board. He got a pilot’s license and scuba certification, and in his day job at JSC he rose to become the manager of the Emergency Operations Center. At every round of applications, he looked for ways to make himself stand out. As a college basketball referee, he argued, he had to make quick decisions and stick by them under a lot of pressure from people adversely affected by his rulings. On his final, successful interview he pointed out that he was from Nebraska, and NASA had never had an astronaut from that state. He joined the Astronaut Class of 1998.

In the next section, the focus is on the astronaut candidate training process. Until that’s completed, the candidates are not eligible for flight assignments. It’s a time for caution, to “keep your head down and color,” to not screw up. Readers get a look at wilderness survival training; Anderson’s two-week stay at NEEMO, NASA’s underwater training facility in the Bahamas; and the classes in Russian that astronauts hoping for missions on ISS must take.

Before he made his first spaceflight in 2007, Anderson was tapped to be a family escort for the ill-fated crew of Columbia, with a painfully intimate part in the events of the terrible day in 2003 when that ship came apart during reentry over Texas. Managing his own grief at the loss of his friends while doing his best to support their wives and children was tough duty. Helping his own young children deal with their fears when he made his own flight was tough duty, too. Another emotional struggle occurred aboard ISS, when he found out that his mother had cancer and might die in the months before he came back to Earth.

Anderson’s coverage of the various elements that make up the life of an active astronaut are comprehensive. We get a chapter devoted to the design of mission patches, and a chapter devoted to the operation of the ISS toilet. His description of the trials of re-adaptation to Earth gravity after five months in space is graphic; don’t plan on reading that chapter while eating. But while all the elements are there, they suffer greatly from not being arranged chronologically. Events from before his first launch are described after his return, and bits and pieces of his stay aboard ISS are presented with no discernable pattern.

There’s one part of this story that’s tough to get a handle on. By Anderson’s admission, he made some mistakes in dealing with his teammates in Mission Control and his bosses in the NASA bureaucracy, and those mistakes eventually led to the statement from the head of the Astronaut Office that he’d likely never fly again. Being marked as “not a team player” is the ultimate sin when it comes to being selected for long missions aboard ISS. Yet when Anderson lists his offenses, they don’t seem to be bad enough to ground him. This reader was left wondering what I’d have thought about him if I’d had a closer seat to the events he describes. It’s clear he sees himself as someone striving for excellence, whose attempts to get others to see his point of view were misunderstood.

As autobiography, this book misses the highest mark of poetry and insight set by a few of Anderson’s peers in the astronaut corps. It is, however, a solid member of the class, which is what he always aspired to be in his personal and professional life.