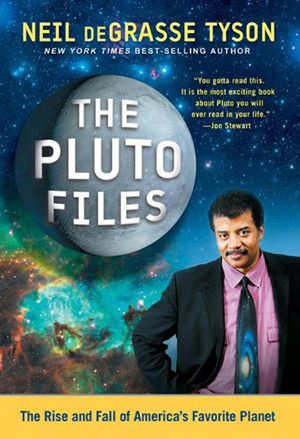 At a mere 160 pages, Neil deGrasse Tyson’s dwarf book is much like Pluto: It’s got plenty of substance, but is mostly appreciated for the cartoons. As one may guess from the title of Tyson’s new book, the publication is a nonfiction account of Pluto’s fall from planethood. It combines serious science with an entertaining levity that is usually reserved for farce.

Tyson, director of the Rose Center for Earth & Space at the Hayden Planetarium in New York, began his career there at a very interesting time. In 2000, the museum had a budget of $230 million and he was trusted to manage the planetarium’s renovation. Historically, science museums and planetariums displayed the planets grouped together, but the Rose Center’s curators wanted to do something different — something innovative. They grouped like objects, which necessitated that Pluto be placed in a class with other icy objects, far from the other planets.

One year went by. Then, on January 22, 2001, in a news-breaking front-page story entitled “Pluto’s Not a Planet? Only in New York,” cheeky New York Times reporter Kenneth Chang accused the planetarium for downgrading Pluto’s planetary status.

For the next several years, Tyson was bombarded with hate mail from the spectrum of space skeptics — from surly 70-year-olds to sugar-high seven-year-olds, who wanted to protect Pluto’s repute. So what does one do when the New York Times publishes an agitating article? Leave it to Tyson to respond with an entire book.

The Pluto Files offers hilarious documentation of the uproar over Pluto that came through the press and his own mail. Tyson plucks the wittiest, most facetious, most self-righteous characters from personal, corporate, and government sources, featuring them on his literary stage.

One elementary school student, for example, lectured Neil with an illustrated letter: “You are missing planet Pluto… this is what it looks like. It is a planet. Love, Will Galmot.”

Other more anonymous characters are heard in Disney’s public statement that Pluto’s demotion is “dopey” and “grumpy.”

He even includes the California Assembly Bill H236, which takes a tone of authority: “Whereas Pluto… affectionately sharing the name of California’s most famous animated dog….” Like a professional comedian, Tyson makes fun of every character — even himself. He even breaks out into song. After all, drama lends itself to a chorus, and in this case Tyson provides ample page space to the choir. You can read the entire lyrics of three songs in the appendix (my particular favorite is “I’m Your Moon,” a melancholy ballad by Jonathan Coulton).

But all joking aside, The Pluto Files does give the reader an inside look (and a hearty laugh) at how the scientific classification of a planet is decided. Tyson, being a Harvard and Columbia graduate, is well-educated in scientific classifications. “What I don’t know,” Tyson muses, “is this: If I shout ‘Pluto is not a planet’ in a public place in New Mexico, could I get arrested?”

I unequivocally recommend this book to anyone with a sense of humor about scientific categorization. I also recommend that anyone too stiff to enjoy the book’s witty commentary please write to the author with your complaints, for there is always the possibility of a sequel. Tyson was voted the “Sexiest Astrophysicist Alive” by People magazine in 2000, and it is possible that The Pluto Files will earn him the title of “Sassiest Astrophysicist Alive.” In fact, I dare the New York Times to bestow him this new title.