Book Review: The Politics and Perils of Space Exploration 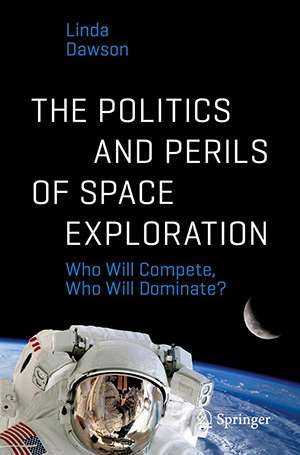 In the preface of this book, author Linda Dawson explains that she wanted to write the book for “a number of reasons.” Among the reasons were educating young people about NASA and its relationship to private space enterprises, providing insight into current efforts in human space exploration, and addressing how politics has affected the direction of the American space program. As a result, the book is wide ranging, covering both historical and current space programs in factual accounts and in political analysis.

This book is a comprehensive introduction for someone with limited knowledge of space exploration, its history, and its challenges. The content includes such topics as technological risks and accidents going back to the Apollo program, the science and dangers of outer space, and the politics of space programs as far back as Robert Goddard and Wernher von Braun and as current as plans for new space stations by Russia and China.

Dawson deals with both government and commercial space programs, devoting full chapters to each as well as including both in chapters focusing on other topics. In particular, chapter 2 explains the symbiotic relationship between NASA and several private space companies. NASA contracts help support the development of technologies that will benefit not only NASA, but commercial space endeavors as well.

Some of the information is so current that it will be outdated soon. For example, chapter 1 includes specifics about NASA’s 2016-2017 budget and its projected goals for the 2016 fiscal year. The discussion of that information will remain relevant, however, as it illustrates the context of the government’s budgeting process and the associated political considerations.

Political aspects of space exploration extend to the international arena, and Dawson provides the context of the Cold War and potential nuclear warfare as backdrops for the first Space Race. She also brings readers up to date with a summary of the current capabilities and future goals of several spacefaring nations including Russia, China, India, Japan, Iran, Israel, the United Kingdom, and the European Space Agency. Dawson draws a stark comparison in chapter 4, which is titled “Why Not Go Back to the Moon?” She writes, “There seems to be a distinct difference in goals between US space policy and other countries interested in setting up platforms and doing research on the Moon…. Currently, space agencies interested in sending humans to the Moon as early as 2025 include China, Japan, Europe, Russia, Iran, and a few private companies.”

Instead of going back to the Moon, NASA plans asteroid redirect missions and visits to Mars. “In an age of budget constraints combined with instant gratification, public support is more excited about traveling to Mars than making preparations on the Moon for an upcoming mission to Mars,” Dawson asserts. Chapter 3, “Mars,” examines not only NASA’s plans, but also those of commercial space entities including Elon Musk’s SpaceX and the Mars One Mission with its advisor Robert Zubrin.

Dawson had ambitious goals in mind for The Politics and Perils of Space Exploration. She is an aerospace engineer and an educator, and she served as a NASA aerodynamics officer during the Space Shuttle Program. Her book is simultaneously historical and current, technological and political, domestic and international.

The flaw that may have resulted from such an ambitious effort to present a very broad set of topics is that there are some inconsistencies and misstatements in the book. For example, both of the following appear on the same page: “In 30 years, there were 119 shuttle launches…” and “[the shuttle’s] accomplishments during its 30 year history include [t]hree decades and 135 flights.” Maybe those statements can be reconciled somehow, but it is not clear from the text. Another example involves travel time of human missions to Mars. In various places, Dawson writes “Going to Mars can take 3 months, one-way,” “Mars is reachable within 1.6 years at Earth’s closest approach,” and “the journey to Mars will take at least 6 months.” Although there aren’t many such examples in the book, I found them troublesome. Before quoting a fact from the book, one might want to verify it.

In summary, the book is worth reading for those looking for a broad introduction to space exploration including its political aspects.