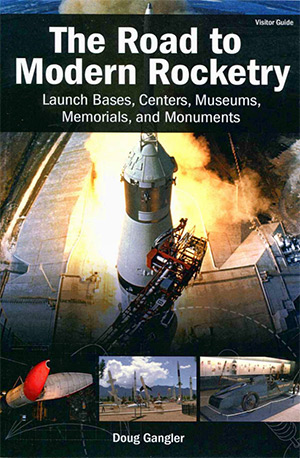 The Road to Modern Rocketry: Launch Bases, Centers, Museums, and Monuments is presented as a visitor’s guide to the world’s rocket programs, although it is much more than that. Doug Gangler has written a comprehensive guide to the locations that celebrate and operate rocket launch programs around the world. At the same time, he has composed a very interesting history of rocketry from the earliest use of black powder to launch primitive rockets, through the construction of the International Space Station and the advent of commercial cargo launchers. The book gives a detailed description of each country’s rocket launch efforts and the people who have led those efforts, followed by a guide explaining the launch bases, centers, museums, memorials, and monuments that can be found in those countries. The guide provides all the information anyone would need in order to visit one of the locations, including website, telephone, hours, directions, and what is displayed there.

The author tells the world history of rocketry starting with the contributions of Copernicus, Kepler, Galileo, Newton, Congreve, Hale, and the influence of Jules Verne. Gangler then introduces each of the pioneers of modern rocketry and chronicles their achievements in their home country.

In Germany Herman Oberth worked out the theory and equations for payload carrying liquid fueled rockets and inspired a generation of rocket scientists including Wernher von Braun. Von Braun became the principal designer of the V-2 liquid fueled rocket. In Germany one should visit the Deutsches Museum, founded in 1903. The museum tells the story of Wernher von Braun and the history of the V-2. One can also visit the Peenemunde Historical Technical Museum and see the original Power Plant. The museum also tells the story of the early rocket scientists who built the A-4/V-2.

The contributions of France to the space age are noted by the advances they made to become the third nation to launch a satellite in November 1965, and by the work of Esnault-Pelterie. In France one can visit bunkers built by the Germans to launch V-2’s toward Great Britain. One of the best is La Coupole where a large dome was built, intended for the assembly and storage of V-2 rockets. The dome now houses an excellent museum, and visitors can self-tour underground tunnels and caverns. France is also home to Star City, a fifty acre theme park. It has many exhibits geared toward children including a planetarium, but also has a Mir space station replica, a Soyuz spacecraft, and a full scale mockup of an Ariane 5 rocket.

In Russia, Konstantin Tsiolkovsky, born on September 17, 1857, became the “Father of Cosmonautics.” He is credited as being the first to thoroughly analyze the reaction functions of a rocket traveling in the vacuum of space. He was followed by Sergei Korolev who studied the V-2 and became the chief designer and head of development of the R-7 rocket, which launched Sputnik 1 and Vostok 1. One can visit the home where Korolev lived in Russia, which houses 11,000 artifacts of the space age. The K. E. Tsiolkovsky State Museum on the History of Cosmonautics is an interesting destination which resides in his hometown of Kaluga.

Robert H. Goddard was born on October 5, 1882 in Worcester Massachusetts. The “Father of American Rocketry” is credited with launching the world’s first liquid propellant rocket on March 16, 1926 at his Aunt Effie’s farm in Auburn, MA. His experiments took him to Roswell New Mexico in July 1930 where he continued to build and launch larger and more powerful rockets. Goddard eventually obtained 214 rocket-related patents, some of which were used by NASA in later rocket development.

The author further describes the formation of NASA and the contributions of German rocket scientists to American rocket development. The Germans, led by von Braun, were brought to the United States in ‘Operation Paperclip’ after WW II. Gangler also describes the contributions of the Jet Propulsion Laboratory, Gen. Henry Arnold, Gen. Bernard A. Schriever, Maj. Gen. John B. Medaris and many others to the advancement of missiles and rockets in the U.S.

All of the attractions at major U.S. space centers and museums are described and all the needed visiting information is provided. The real value in this guide is in the details and advice given for off the beaten path space centers, museums, and launch facilities. Gangler provides helpful hints for visiting several attractions especially on military bases, which may require passes, ID’s, or prior tour scheduling. This book is also one of those rare volumes that include an expansive appendix that should not be skipped. These appendices are really an extra chapter describing Newton’s Laws of motion, rocket flight equations, escape velocity, rocket propellants, and vital statistics from early rockets up to modern launch vehicles. All of the data and principles of rocket operation is written for any adult to easily understand.

Whether someone has read five hundred rocket and space history books or just one, this book will be enjoyable to read and a valuable resource for any level of interest or knowledge. The Road to Modern Rocketry is an excellent history of the countries and people who built the road we are traveling today. It is also a useful guide to the “Launch Bases, Centers, Museums, and Monuments” that help tell that story.