Book Review: The Seventh Landing – Going Back to the Moon, This Time to Stay 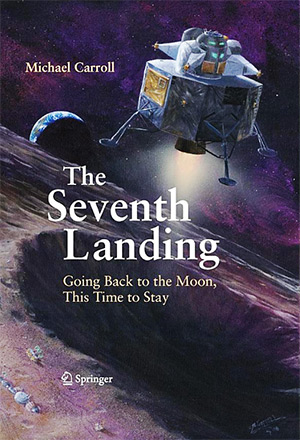 If you have been waiting for the next boot print to be set in the dusty lunar soil, The Seventh Landing is for you. The sixth manned landing on the Moon was completed when Apollo 17’s Lunar Module Challenger lifted off from Taurus-Littrow December 14, 1972, thus ending the first era of human exploration on the Moon. With extensive detail and inspiring illustrations, author Michael Carroll opens a new chapter, describing the current Constellation mission plans to return to the lunar surface to live, learn, build, and explore.

The author tells the story of lunar exploration to date, whetting our appetite for the visions of people exploring our nearest celestial neighbor again. He describes the early robotic missions, including the Soviet Union’s Luna 9 probe making the first soft landing on February 3, 1966. Luna 9 showed that the lunar dust was not deep enough to engulf any machine attempting to invade the Moon. Only four months later, the U.S. Surveyor 1 set down at Oceanus Procellarum, proving that a powered descent and landing was achievable, and that humans could follow in the Lunar Module.

Carroll chronicles the first people to orbit the Moon on Apollo 8, helps us relive the triumph of Neil Armstrong’s “one small step for a man,” the pinpoint landing of Apollo 12 next to Surveyor 3, and the days of extended scientific exploration during the J missions of Apollo’s 15, 16, and 17.

The real focus of the book is a Constellation mission to the Moon’s highly intriguing Shackleton Crater in the South Polar Aitken basin. The author outlines the allure of the Shackleton site which offers near constant communication with Earth, almost continuous sunlight for power generation, and probably water ice sitting within deep shadows of the polar craters.

Unless redirected by the current administration, NASA plans to launch four people in the Orion crew exploration vehicle on the Ares I rocket. The mission requires an Earth orbit rendezvous with the Altair lunar landing vehicle and the Earth departure stage, launched by the more powerful Ares V. Upon arriving at the Moon, the spacecraft will brake into lunar orbit using the large engine on Altair. Then Orion will orbit autonomously for up to six months, while the full crew lands in Altair for a 21-day sortie mission or a 210-day outpost exploration. In his incredible original artwork, the author depicts an Ares V launch, the Altair descending to Shackleton crater, rovers mining the regolith, and a surface mounted solar power tower. These images help the reader imagine being on the Moon.

Carroll presents many logical reasons for a permanent return to the Moon as the next step in human exploration of our universe. He describes In Situ Resource Utilization which can be used to produce oxygen, hydrogen, and other resources. According to many engineers, we need to learn to live and operate long term on another world. This means building habitats of inflatable or solid materials, providing a livable atmosphere, and assuring protection from cosmic and solar radiation and micrometeoroid impact. We need to construct communication systems for long-range voice and data transfer. Surface rovers and spacesuits must be able to function long term in the harsh environments of vacuum, surface dust, extreme temperatures, and radiation. These challenges, and the unforeseen obstacles, could probably be overcome more successfully at the Moon than any more distant destination in the Solar System.

The author also provides many scientific reasons for returning to the Moon. He points out that even after assailing it with probes, orbiters, and twelve human explorers, we do not completely understand its origins. The Moon tantalizes us with the secrets of the Solar System, with its impact history uniquely preserved on its surface. The lunar samples have magnetic properties and electrical charge and these phenomena are not fully understood, nor are their possible effect on astronauts and equipment. Many questions remain unanswered, including the state of the Moon’s core which, Apollo data shows, is less than a solid mass.

Carroll is obviously a passionate advocate for all human space exploration, as he devotes a full chapter to analysis of a trip to Mars. He presents the profile of a two and a half year Mars exploration mission, as well as Robert Zubrin’s Mars Direct plan which would manufacture fuel for Earth return from the Martian atmosphere. The author includes the political, social, economic, and technological challenges of such a mission. Through the words of several space experts he diplomatically allows for the argument of a dedicated Mars mission. For some, the Moon is a diversion of focus and resources, and carries a public stigma of ‘been there done that,’ while the Red Planet waits for human explorers to unlock its mysteries and search for alien life.

Michael Carroll has woven together details of space accomplishments with current plans for our return to the Moon, “this time to stay.” He has sprinkled throughout its chapters inspiring thoughts from astronauts who have been there, and space experts who yearn for our next sojourn. This is not just a history of missions past, but a cool-headed vision of humanity’s next steps for exploring the Moon and beyond. The author’s descriptions provide the excitement of a new hope for humanity’s settlement of space, and his stunning artwork visually transports readers to the surface of the Moon, which beckons for the “The Seventh Landing.”