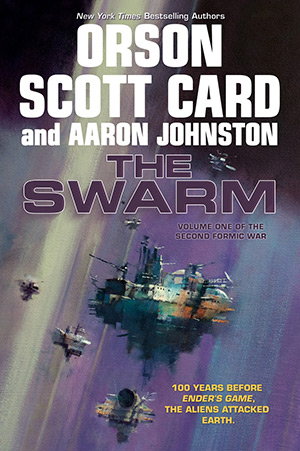 The Swarm is book one of a second prequel series to Ender’s Game and starts shortly after Earth defeats the first invasion of the ant-like alien Formics (see review of Earth Unaware). Although it is helpful to have knowledge of Ender’s Game and the characters from the first trilogy, The Swarm can be enjoyed as a stand-alone read. NSS members will find exciting descriptions of hand-to-hand space combat, as well as a future where humanity has thriving settlements on the Moon and among the asteroids.

After a short recap of the first Formic war, disguised as an excerpt from a historical document, the reader learns that Earth is preparing against a second, much larger swarm of the invaders. Although it is only three years after the initial attack, the next Formic wave is already approaching the outer asteroids of the Kuiper belt. As part of the Earth defense preparations the military sends Mazer Rackem, a soldier instrumental in defeating the first invasion, to test a new weapon meant to penetrate the seemingly invulnerable hulls of the Formic vessels. But when he leads his squadron in a free-floating practice attack against a mockup of a Formic ship at the L4 Lagrange point, one of the prototype devices malfunctions. To save the weapon’s contract with the Korean defense contractor, the military leaders relegate Mazer to a remote outpost to prevent him from releasing information about the weapon’s failings.

On the way, Mazer reunites with Bingwen, a Chinese preteen he met during the first invasion. Since the Formics, like ants, build narrow twisting tunnels on their ships as well as underground, the Chinese hope that small children will be effective fighters against the enemy. Bingwen and the other youngsters will train for such combat at the newly created outer space “Battle Room” which series fans will recognize as the genesis of the Battle School from Ender’s Game. Mazer learns his new orders include teaching them zero-G combat at the outpost.

But even young, tiny soldiers will be ineffective in the Formic tunnels if they do not have new offensive and defensive weapons. And so Mazer and Bingwen establish long range communications with Victor Delgado, a Kuiper belt miner who entered a Formic ship during the first war. Based on their shared experiences, the three devise new techniques for space combat in close quarters.

Victor must quickly put his new skills to use. A recent report indicates the Formics are moving multiple Kuiper belt asteroids. And although Victor’s family mining ship is strictly civilian, the military orders his ship to investigate. After they approach one of the suspect asteroids, and to keep his family at a safe distance, Victor launches alone in a spacesuit armed with makeshift defenses. What he finds is mysterious, but readers familiar with the importance of asteroids for space settlement may guess the Formics’ plans. Before Victor can investigate fully, the Formics attack him, resulting in an exciting sequence of the novel.

Since Victor’s reconnaissance was cut short, the military sends Mazer and Bingwen to another asteroid. There the tunnels to the center of the asteroid are extremely narrow, so Bingwen penetrates them solo. What he discovers about the Formics and his attempt to escape with the information provides the culminating action.

Whereas the first prequel trilogy seems like one long novel arbitrarily chopped into separate books, I believe this novel is a more complete and self-contained story. For space enthusiasts it contains some interesting ideas, such as applying nanobots to space boots to allow them to adhere to surfaces. The novel spends, perhaps, too much time on the dysfunction of the military and political establishment where officials wish to save their own careers over doing what is best for humanity. And there is one side story about ruthless space pirates, which I assume will play a role in subsequent novels of the series, but here distracts from the main plot.

Ender’s Game fans should enjoy this latest installment, and by the end of the novel will want to read the next book. NSS readers will find less information about the ecosystem of lunar corporations, commercial asteroid belt miners, and family mining ships in the Kuiper Belt than in the first trilogy. However, they should still enjoy a credible future vision of humanity’s expansion throughout the solar system along with some exciting space action.